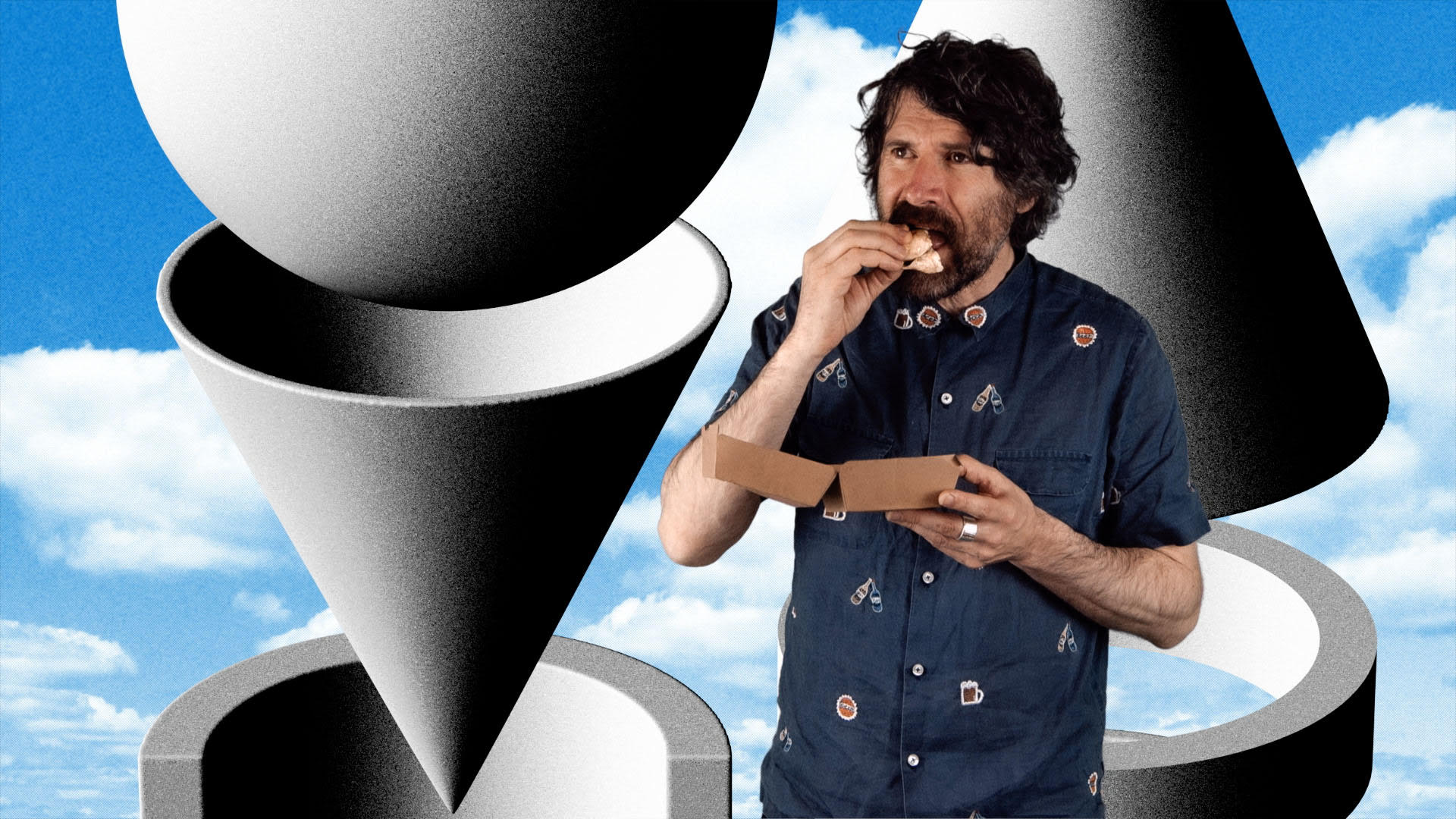 Gruff Rhys on Prince and Pang!

An interview with Gruff Rhys about his new album 'Pang!', his strange visit to Paisley Park and a very organic kind of experimental music.

Gruff Rhys is back with his sixth solo album, though with the number of projects this pure cosmic creative spirit works on, he’s not one you keep a tally with. You just jump into his work whenever it pops up for a good cleansing of the soul; ever since the very early days with Super Furry Animals, Gruff has been your go-to for songwriting craft, counter-cultural attitude and a gleeful musical exploration. So it is with his newie, ‘Pang!’, a psychedelic pop album in Welsh filtered through the house sensibilities of Muzi, a South African producer who Gruff met around the time of the recording of the new Africa Express album which both worked on. It is a delight, a unique and irresistible shot of sunshine vibes shot through with dread, which may be the perfect soundtrack for this summer. We spoke to Gruff about putting the album together with Muzi, how he was inspired by Prince, and his lost Hammond organ instrumental album…

How did you get involved with Muzi? Did you have a love for South African music in general?

I got a chance to go to South Africa with Africa Express about a year and a half ago, and I ended up working with Muzi on a track called ‘Vessels’ with a legendary South African guitarist called Puzekhemisi. I liked what Muzi had done to his guitar, he sampled him and incorporated his traditional guitar into beats. I went home and then a few months later I was commissioned to do music for a video project that featured dancers so it needed a South African pulse. I recorded this track and sent it to Muzi to remix it because I knew what he could with the guitar. I loved what he did, and that’s the second track on the album called ‘Bae Bae Bae’.

When I heard the remix I was like wow, let’s do the whole album. He said, ‘yeah alright’, and so it happened quite unexpectedly and simply at the same time.

I was really pleased to meet Muzi and it was more about his skills as an electronic producer than exploring the sounds of Africa.

Did you write songs with him in mind after that?

What I liked about how he worked was he wasn’t far removed from what I do. I would have recorded the songs for an acoustic album but I was excited about putting them in a futuristic setting rather than a trad setting. Especially being in the Welsh language. I think it’s always exciting to have futurist songs in the Welsh language because there’s plenty of trad stuff already.

Were you sending him stuff, how did it work practically?

I recorded the songs at my friend place, Chris Jenkins. He has a studio in his house and I’d take the kids to school, go to Chris’ house, have some strong coffee, record till about quarter to 3, then I’d go pick my kids up. We did about a week’s worth of days like that and we had the album done, pretty much. Muzi was over here playing a show and he came down to Cardiff for a few days and he mixed everything. It’s essentially a remix album, but I was there as well. We had a few intense days taking the album apart and rebuilding it.

Was that a very different way of working for you?

Yeah, it was a radically different way of mixing because we were essentially just sampling parts of songs and rebuilding them. The vocals would stay intact, sometimes we’d change the guitar, or add in backing vocals but mostly everything was turned into loops, and rebuilt and added to. It was a fun process.

Great. Enthusiasm in the studio goes a long way.  It’s a great experience working with Muzi because he works in the moment. He’ll change a track radically in a few seconds – I love that approach.

Were you conscious of keeping it organically experimental rather than heading to the outer limits with a proggy concept album?

Yeah although there’s space for that, in designing a record and carefully mapping it out and executing it – but this was the complete opposite, this was just using the songs that were written and we just pulled them apart and rebuilt them in a joyful process. It’s an experimental record in that it’s a document of a few days of the studio rather than setting out with something specific in mind at that start.

Do you prefer working experimentally these days or has it always been like that?

Musically I tend to veer from trying to make a pure songwriting record before getting absolutely frustrated and finding it really stifling, then going off to find different experimental ways of working – and then I go back again.

Pang! is the first song people will probably hear. Pang’s a great word. Can you tell us about the track?

I don’t think it’s a good word. On the album sleeve I’ve depicted it in concrete, in these heavy forms which interfere with a blue sky. In the context of the song, I suppose it’s a happy song which bounces away, but then it’s like a sunny day when you put the radio on and you hear the reality of the news and its like a pang of horror. Or remorse. So it’s like a jolt of realisation.

The design of it all is great, who did you do that with?

A designer called Mark James who I’ve worked with over the years and he’s amazing. He directed the video, made the sleeve – and most of its full of Prince references. I did a tourist trip to Paisley Park coincidentally during the making of the record and it had quite a profound effect on me so everything refers to Prince throughout. In Paisley Park when you walk in, Prince’s ashes are in a miniature version of Paisley Park in a Perspex box, and there’s a cage of live doves next to it! And there’s a cloudy blue sky painted on the wall, so the visual references for Pang! came from that.

What else did you see in Paisley Park that inspired you? What’s it like?

Well it’s by a busy road with this big car park next to it, so it’s like going to B&Q. But there’s weird things inside, like you walk through what looks like a normal door and suddenly you’re in a 5000 capacity venue they had as part of the house. Another section is a nightclub, there’s a couple of recording studios, a dance studio, a diner. It’s like a relic of a time when there was money in music.

Did you take anything from Prince musically ?

Yeah just his work as a conceptual musician. He could create a world, with all the painstaking detail around it. Musically I’m into albums like Around The World In A Day , the joyful psychedelic records. Processed pop with a psychedelic edge.

Did you want to do Prince on a budget?

Well I suppose ideas don’t cost anything. But I think musically I listened to a lot of Prince and the album is quite processed pop. I don’t think it sounds anything like Prince but it was part of the inspiration.

Can you tell us about your upcoming live shows and the festival in your hometown Bethesda?

Yeah it’s going to be exciting I’m playing some festivals over the summer with the band who played on [last solo album] Babelsberg. And then the shows with Pang! is a bit more experimental and using video, and some of the musicians from the album. Muzi is going to come for the festival so that’ll be a unique one-off, it’s going to be high energy.

We’re living in strange, doomy times – what do you make of music in this context? Do you feel responsibility to engage with it?

Well you’ve got Extinction Rebellion stopping traffic in cities and they’re incorporating music into that. Music doesn’t always have to be a specific protest song to excite. Music can soundtrack things and work on a visceral level. Some musicians are able to write amazing protest music, but sometimes an experimental piece can become politicised. Just lots of different roles music can play. It can go places where words can’t sometimes.

Do you think there’s a good alternative music scene rising up now?

Do you think Welsh independence will happen and can we come with you?

Well the more power people like Boris Johnson and the Brexit Party get, the more attractive Welsh Independence seems. I think councils have been voting for the last couple of months, which may have consequences in declaring independence. I’ not sure how widely it’s been reported, but it is being discussed in a way that it’s never been discussed in my lifetime.

Just on Super Furries, it was 20 years since the release of Guerilla recently – do you like looking back at it?

Yeah we’ve been listening back, we’ve actually been trying to get old recording tapes out, but we missed the 20th anniversary. But it’s why 20th anniversaries are the best because if you’re late you can still make the 21st which counts as an anniversary as well! 31st anniversary doesn’t make any sense beyond that. We’re trying to dig out tapes and find demos so I’ve been listening to the record and it still sounds fresh and vibrant, I’m really happy we got to make it.

Was it an enjoyable one to make?

We ended up having to produce it ourselves at the last minute so it was enjoyable but there was a lot responsibility as well, because we found ourselves in this big expensive studio and trying to keep it together. It was an amazing time, really productive. We were able to dedicate our whole lives to it, to making insane sounds all day every day. But I think I gave up drinking and stayed straight because I felt so much responsibility. So it was really intense.

At least you can remember the recording I guess, you have a clarity of recollection?

Yeah, I was so hyped I was recording an instrumental track every morning on a Hammond organ. I recorded an entire album of Hammond organ instrumentals. But they got completely lost and have never been found. I wish I’d kept them.

What do you do for your own well being? Are you a scented candles and yoga kind of guy?

I have no routine. My main job is being a dad, looking after kids, I have no time to fit in exercise. But with kids it’s hard to fit in vices as well, so I think it balances out.

Gruff Rhys new album Pang! is out on 13th September. Pre-order and listen to tracks here.

Sign up to our daily newsletters for the best interview and the latest from the frontline of modern masculinity.