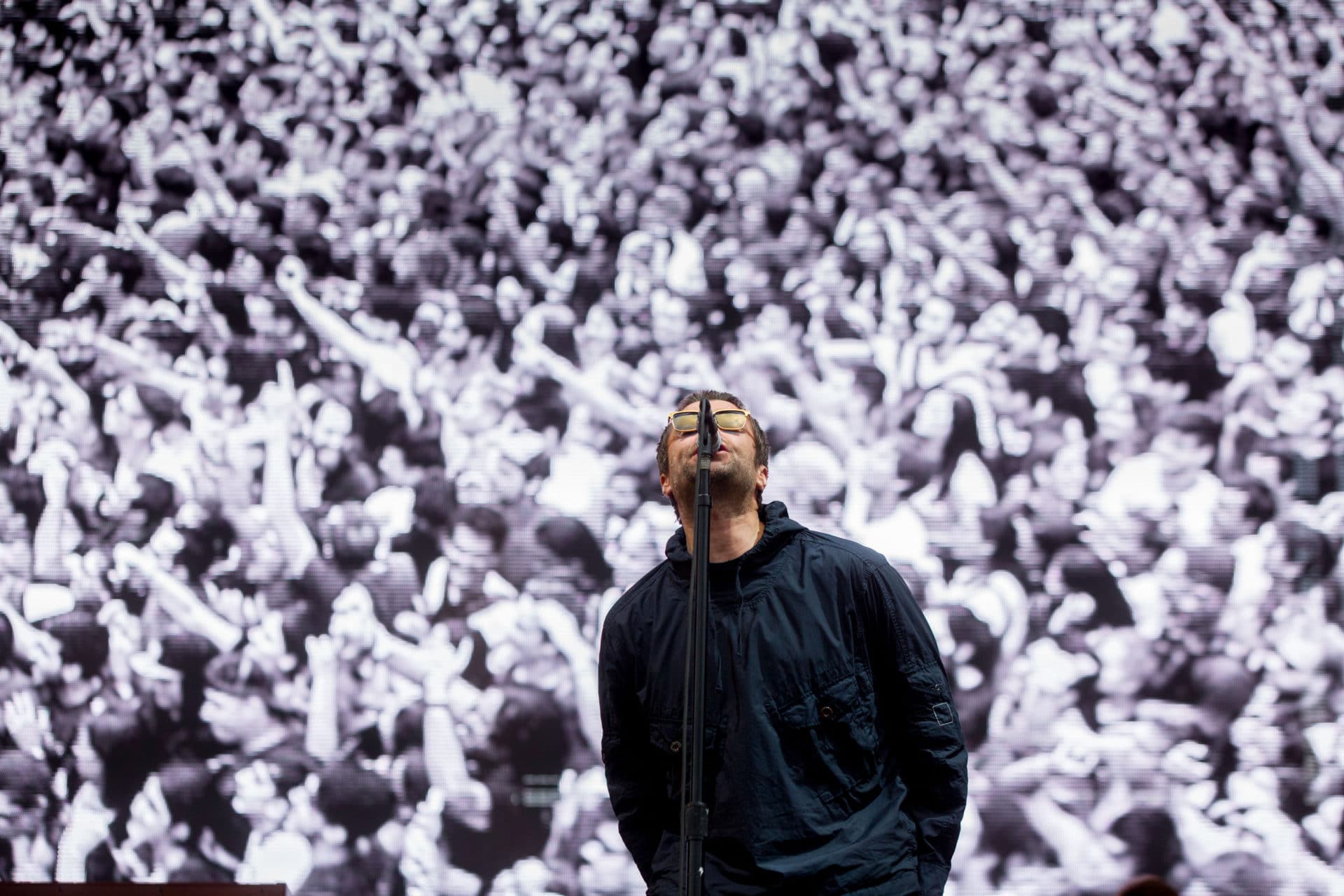 The Evolution of Liam

How Liam Gallagher managed to lift the spirits of a crowd at a poorly organised show at Finsbury Park, through the old combination of songs, charisma, and a new and welcome tenderness. Yes, really, rkid.

The first fish walked out the primordial ooze 500 million years ago, slithering its way up into a swamp, where over time it transformed into a frog and then hopped into the trees to turn into a chimp, swinging its way through to the other side, shedding its hair, till it walked out upright to migrate across the plains as a Homo sapien, after which, after a chequered history, it finished up at last on a big screen on a stage, continuing its walk with an added swagger, retaining aspects of its previous incarnations, but very much its own creature now: a Liam.

This ‘Liam’ is walking towards the stage from his dressing room, his movements filmed by a camera crew and projected onto a big screen where a crowd watches him head towards them. He points at the camera, pointing at the people, and eventually emerges onto the stage where he says, “I am he as you are he as you are me and we are all together,” from I Am the Walrus. But we are not walruses. No tonight, we are all Liams, tonight we’re all rock n roll stars. All of human history has progressed to this point, and also never really changed –  the present is always the eternal onward movement of life on earth, and no matter what you may think of Liam Gallagher he is very much alive. And who doesn’t want a piece of that?

So let’s not talk about a badly run event, with two hour queues for the bar, and a soundsystem as powerful as a small portable cassette player from 1983, let’s talk about the fact that a defiantly lairy crowd (many of whom were standing on each other’s shoulders and pulling down their trousers and pants to display their Homo sapien kinship) can  drown out any other sound anyway. Liam is an ancient idol, impassive, inscrutable, who serves as a trigger for his people to lose themselves in a festival of Self. Get wankered, get obliterated, no cares tonight, sunshiiine.

Or as obliterated as you can on Coke Zero because you can’t get a shitting beer.

The familiar songs are played, you get ‘Rock n Roll Star’, ‘Listen Up’, ‘Morning Glory’, and the less familiar songs are played from the new album, ‘Wall of Glass’ and ‘Greedy Soul’, and it all works because the crowd makes it work together with him. How curious that Beady Eye couldn’t command such love, despite them playing mostly Oasis songs too (towards the end), yet it just being ‘Liam Gallagher’ sells tickets by the bucketload. People like him, being him.

Also – and you won’t believe this given the sheer amount of urinating going on everywhere, the tsunamis of piss washing over the park – the performance is more intimate than your average Oasis gig. Back then, the big money machine was rolling, and it was all merch stands and Enormodomes, and millions in cash in the boot of a limousine. Here, there’s more at stake for Liam, the pressure is on to prove he can carry it alone, with nothing but a parka to protect him, and ok, a bit of supernatural self-belief. Nevertheless, it feels more personal, and why the greatest moments of the set come when he strips things right back for an encore which includes ‘Live Forever’, ‘D’Yer Wanna Be a Spaceman?’ and ‘Wonderwall’, when it’s the mass singalong, the hugging, the ifuckingloveyoumates, and above everything, Liam’s voice banging on the cosmos. You feel that funny feeling: of life marching on.