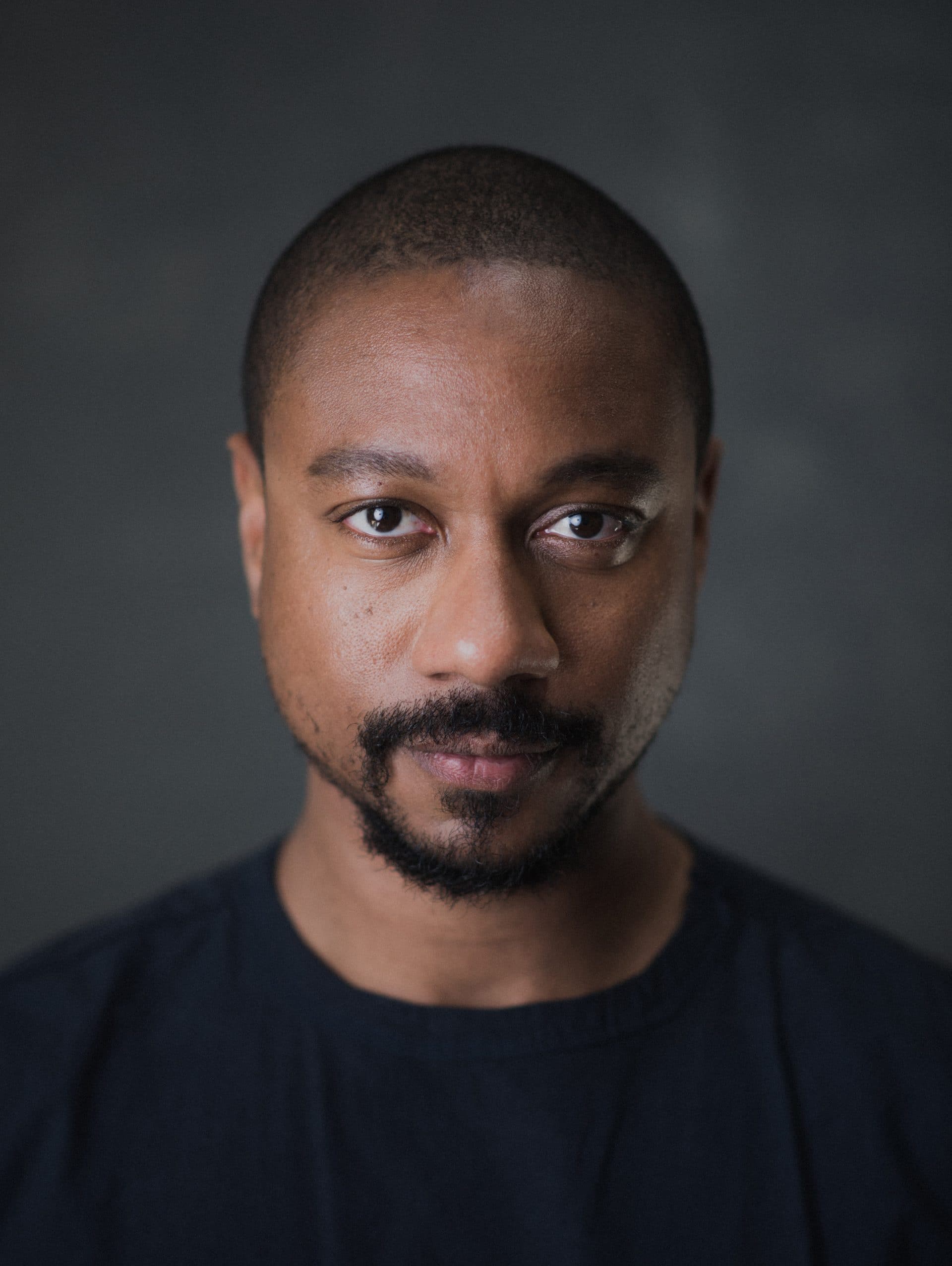 The exponentially rising actor, writer, director tells us about the new series which lays bare institutional misogyny, and how he manages his mental health in the acting industry.

Nathaniel Martello-White is on a roll. Well, he’s been on a roll for some time now actually, as a a playwright (Blacta), an actor (Collateral), and a director (the award winning short, Cla’am), but for those of us who live purely through TV screens now, he’s had some visible new peaks: I Hate Suzie, in which he played Billie Piper’s ‘other man’, was followed by his appearance as Rhodan Gordon in Steve McQueen’s Small Axe: Mangrove. Now, he’s following it up with another show which achieves similar heights. Deceit is a true crime drama about the investigation of the brutal murder of Rachel Nickell in 1992, a honeytrap operation known as Operation Edzell. Niamh Algar plays the officer assigned to lure the suspected killer into revealing himself, and it is a story about misogyny and violence towards women, not just in terms of the murder itself but in the police force which exploits, controls and puts females at great risk. Directed by Bafta-winner Niall MacCormick, it is an exceptional series, which chimes with our times in a deeply unnerving way. Nathaniel plays Baz, the police handler who supports Niamh’s character more than most. It is another top role by a guy who will also soon be unveiling his debut feature film – big things are happening for Nathaniel, and we spoke to him to find out more.

Deceit is a powerful series, can you tell us a bit about it and  your character?

Well, it’s obviously it’s based on the murder of Rachel Nickell, or at least the events surrounding that – it’s not a deep dive into her life, it’s more about the way the police handled this honey trap investigation.  And through this investigation, we get to explore systemic elements within the police force and the treatment of female officers and what they were asked to do. For me it’s about the ethics of this honey trap mission she goes on and the men around her and how they influence her in different ways.

Baz was a great character to play. I’ve known Ado [Yoshizaki Cassulto] the producer for many years, and we actually went for breakfast and he was telling me all about this show that he’s producing during COVID and the lengths he had to go to try and make it all run. We didn’t talk about whether there was a role in it for me. Literally, the following week, he gets a call from the director who had watched I Hate Suzi and seen me in that, and said, ‘Oh have you thought about this guy Nathaniel Martello-White?’ It was a funny little moment. So we discussed the role and literally a few months along, I was on set.

With Mangrove and I Hate Suzie, it seems like your lock down has been pretty good?

On the work front, it’s been really good. But I think maybe all of our industry is experiencing a bit of burnout as they’ve just carried on. I’m a writer as well, so I was turning around scripts whilst shows were coming out. But it was great to do Deceit because I was sat at home for nine months before that, so just to get out of the house and be around people, on a mental health level, the social aspects of it, were really helpful.

How was it on set coming back into that environment? You’ve got some great scenes there with Niamh…

It was amazing. The funny thing was that because I Hate Suzie and Mangrove were both intense in different ways, I really enjoyed this – all of my scenes were two handers and in a way it’s much easier to prepare for those. It’s sort of tennis, just you and the other performer and I love the way Baz was having to negotiate his own ego. She’s the star, she’s got this big case and he’s having to keep his ego in check, and they’ve also had history. Whether they’ve had an affair or whether they were an item at one point in time – there was the subtext of that. And then just primarily trying to make sure that she doesn’t slip, that she’s not too simplistic about the mission and keep trying to remind her there is an edge, this is dangerous, don’t get carried away.

So it was nice because of the ego elements and the fact that we’ve been intimate in the past, it stopped it being this worthy character who was just trying to stop another character from making a mistake.

When you’re doing material based on true stories, is there a different approach to a usual production, is there an extra responsibility?

I think there is an extra responsibility, although the way I go about every character is to try and bring an absolute truth and authenticity to the role. So that doesn’t change for me. But I think it’s just you’re more aware that there are these other elements around what you’re doing. It’s always going to be a bit affecting.

But Baz was partly fictionalised because we didn’t know who the real Sadie’s handler was. They gave me license to really just build this character from scratch. So I didn’t feel it in the same way as when if I had to play Collin Stagg, for instance, which I imagine would be a lot of pressure.

I just watched a lot of movies about cops. I’ve played a few cops already, but I’ve never played an undercover handler. There’s a way that cops hold themselves, and I always try and lean into that. I re-watched Heat. I love that movie, it’s always helpful – if you’re playing a cop, watch that movie. There’s some great performances in there.

One massive thing is just how incredible it was to work with Niamh, because she’s such a phenomenal actress. She did a really giving thing where she was already filming, but she put a call out to me to see if I’d do a few Zoom to talk about the scenes and the characters – we did a couple of 1 hour conversations on Zoom getting into the roles, which was so helpful.

In looking at violence towards women and the treatment of women, it seems very pertinent to what’s going on in society now. Was that something you discussed going in?

I don’t know if we were having intellectual conversations about that, it’s more that you’re looking at the past in the present and going oh yeah. You know, the Nineties was full of hypermasculinity and misogyny. You look at the music videos and the music of the time and certain sort of institutions and the way they treated women and people of colour and you do go, ‘Wow.’ And we’re still not past it. I think that’s the big thing for me, that it’s not like we’re here in this moment in time and we’ve addressed all those things. It’s just that I think we’re more aware of everything, we’re developing the language to be able to address these things, to have difficult conversations around these things.

Do you find that as an actor and a writer, that it’s quite a good period to make challenging programmes?

Definitely. Yeah. I think it’s a great time, and I will say the streamers have shaken things up.  They are taking risks and really making the market more international. You can be an actor in the UK and do a project that has an international reach, and released in America. I Hate Suzie was released on Sky Atlantic and it’s released on HBO Max.

It’s the same with Mangrove which was Amazon, and the BBC – it always used to be that as a British actor you always had to go to America to find that bigger part. And I think in the UK, we’re having a bit of a purple patch shipping in terms of the shows that are being made.

How was it working with Niall McCarmick on Deceit?

Amazing. Just really gave me the freedom to play. When you’ve got two actors about to play a scene, sometimes the best note you can give an actor to begin with is no notes. Just do a few takes and feel your way through it, because then you’re completely present and you’re not carrying the weight of some specifics. And then you refine and we get into more details as we move through. But he’s very respectful and knew he had professional actors, who knew what they’re doing. I guess good directing is good casting maybe. You allow people to do what they do.

Have you got a lot coming up that you’re working on?

Yes. I mean, there’s one project I’m about to work on that I can’t actually say what it is because it hasn’t been announced yet, which is a bit annoying. Maybe I can say that it’s my directorial debut as a filmmaker. My first feature. I’m gearing up to do that. That’s the big step up now

Exciting. Do you have a sense of ‘well what kind of film maker am I going to be?’

Totally. I think they’ll always be exploring race in some tenor, but they’ll be built around genre because I think it’s important that these things are also entertaining and cinema. I think cinema is about poetry and it’s about escapism. My short film Cla’am that I made is a little horror about gentrification, where black people are getting kidnapped and ground up into coffee. That might give you a window into how my brain works.

Because it can be sometimes difficult to approach these issues, bringing them in familiar formats is a brilliant way of bringing them to audiences, isn’t it?

Absolutely. Also, with movies, me and the family when I was growing up, my mum, dad and my sister, we wouldn’t go to the theatre, we’d group around in the living room and watch movies. You have these formative experiences watching RoboCop or Scream or The Matrix or Jaws. As a filmmaker, I guess I’ve never really been into films that are too realist and too introspective and slow. I’m not saying that there isn’t a place for that sort of cinema, but I love event cinema, basically.

Personally speaking, how do you kind of look after yourself in your industry? How do you maintain your mental health and physical health?

It’s a really good question, and it’s partly why I’ve come away to the Coast for a few days. I know we’re all talking about the pandemic, but we’re not really talking about mental health. I personally feel being stuck inside, being isolated and not seeing friends and having extra pressure on relationships full stop, I’ve found that personally very challenging.

But I’m trying to prioritise self care because I think our industry is so competitive, and so exciting, and it’s easy to put that before your own health, basically.