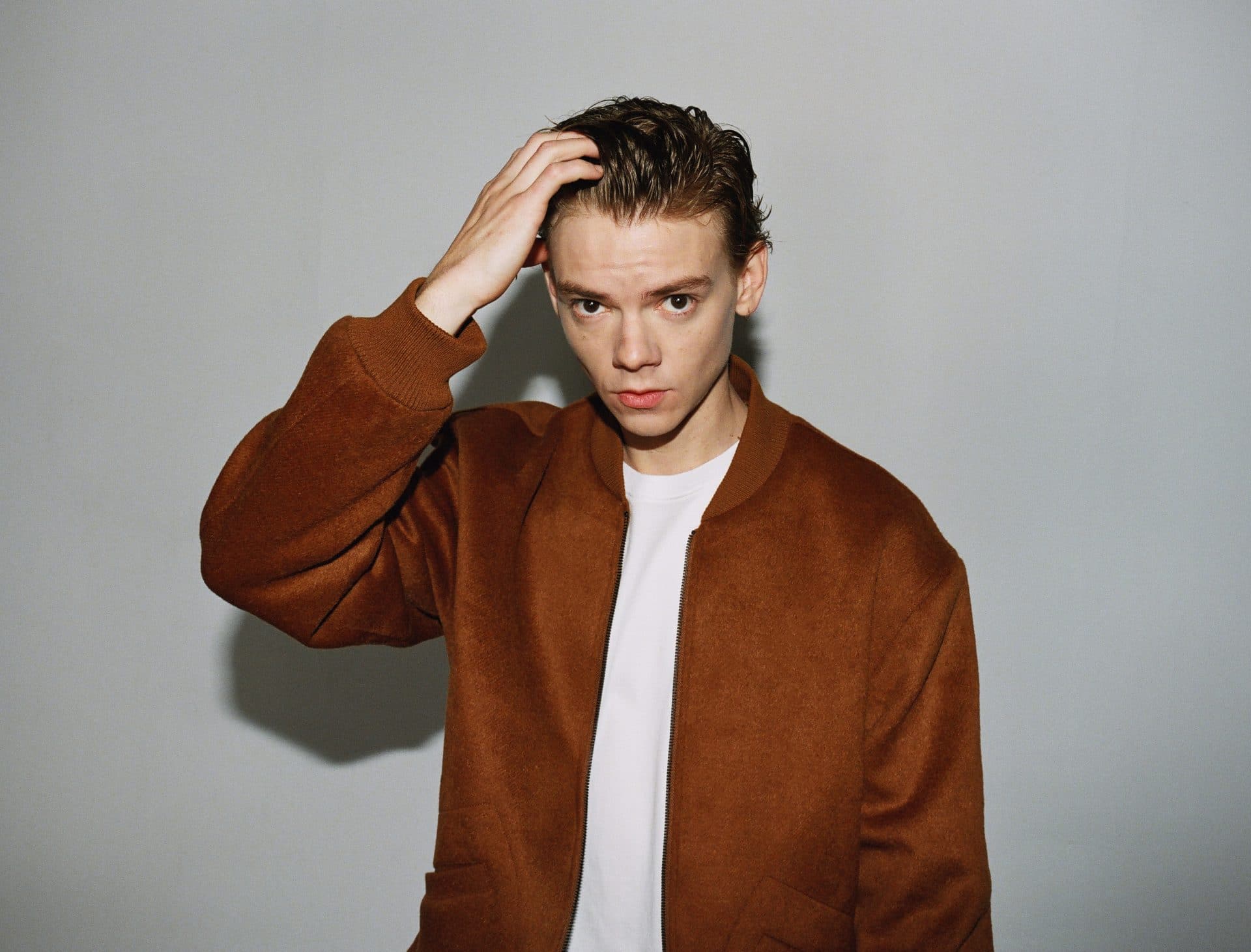 An interview with the brilliant British actor on his role in the excellent new chess-and-tragedy drama series which will have you dusting off your old boards for battle.

The Queen’s Gambit is a real treat arriving on Netflix today – a limited series based on a novel by Walter ‘The Man Who Fell To Earth’ Tevis about a girl called Beth (played by Anya Taylor-Joy) in an orphanage who discovers she is a chess genius; but as she grows into fame and fortune is haunted by personal demons, battles addiction, and is given a rough ride by the male dominated chess world. In the hands of Scott Frank – Oscar nominated for writing Logan – the story is rendered gripping, tragic and surprising, and actually achieves the feat of making chess not just sexy but cool. One of the star turns in the show is by Thomas Brodie-Sangster who has a great time playing Benny, the knife-wielding national champ who is in turn is rival-lover-mentor to Beth. We spoke to Thomas to find out more about the show…

The Queen’s Gambit – great series – can you give us an overview of it?

It’s a story set in the late 50s, and it follows a girl who loses everything, and who doesn’t really know where to turn or what to do. Kind of by accident she discovers her talent at chess and decides that’s the only route she has in life and just goes full hearted at that. She finds her confidence there, through her ability and skill, and that pushes her forward. She meets people who challenge and teach her, and grows as a person and a player. All the time while she’s dealing with the fact she has a heavy addiction to prescription tranquilizers they used to give  orphans to keep them quiet.

Chess, you’d think would be a difficult area to dramatise but it’s quite sexy and gripping… how much did you have to learn about the game and be immersed in it for you?

I knew how to play chess but I am not a master at chess, not even close. But we got to work with a lot of masters, some fantastic people. It wasn’t so much as becoming really good at chess as looking like we are very good at playing chess. Holding pieces correctly, taking pieces correctly, moving pieces around the board. Jotting down your score, hitting the clock at the right time, eye contact. All this stuff. It is a psychological battle, chess – it’s cut-throat, it’s mean. So we were more concentrated on that.

It’s fascinating being around all those people and seeing the mindset it takes to be a very good chess player.

So what does it take, how do these top players’ minds work?

I’m not entirely sure but every I met had something similar going on, they all had this obsession and this quality that was hugely competitive. Quiet most of the time, quite reserved, but when it comes to the game they explode, and they expand with this dominance. Quite fascinating people really.

Your character Benny is different to that, he’s rock n roll – how did you develop him?

Well, Scott got in touch with me, I’d worked with him before on Godless, we knew each other well. We started talking about this chess player – he wanted to make him cool, confident, slightly egotistical, a bit up himself, but also very talented. In fact justified in his cockiness. For me the costume is one of the most important things, so for the fitting we looked at different options and jewellery and lots of squares came out because of the chess boards, chequered patterns and other bits and bobs. And then this weird, strange character started to come out. Wearing a green shirt, long black trenchcoat and a knife. I think he’s just a person who wants to put that bravado across, initially as a form of intimidation. As a tactic – that’s how I saw it. To intimidate your opponent. Every room he steps into he commands by his mere presence. I think it’s very much done intentionally.

One of the interesting things is that behind that he’s a scholar, he studies the game seriously – are you like that in your work?

Sometimes it’s hard to know how much you should study and analyse and how much you should breathe and let go. To let it follow its natural course. It’s a bit of both, the trick is when to tell your brain to shut up, and when to pull your finger out to do some research. It’s somewhere in between those two. 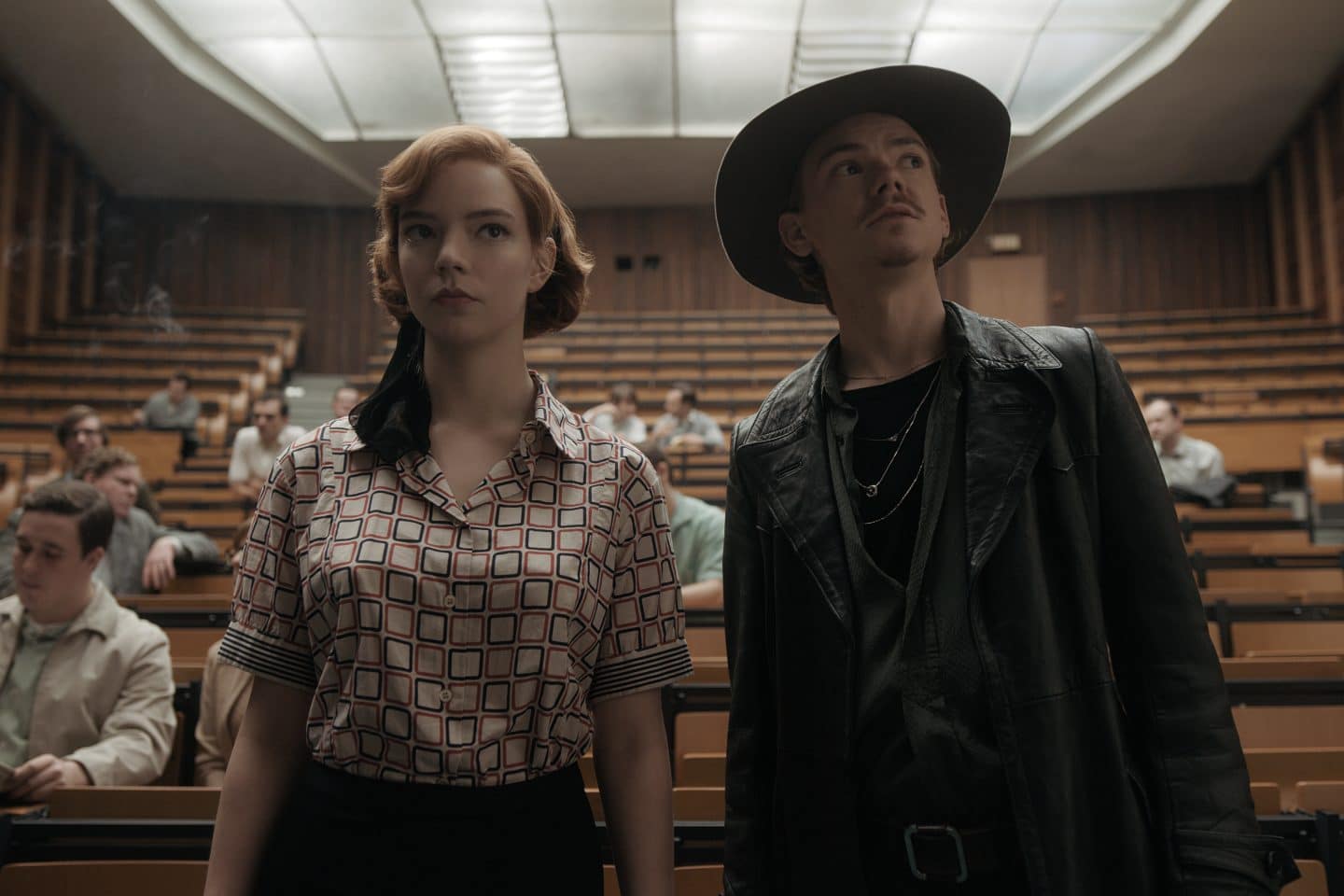 Mental health is interesting in the show – it shows the mind is a treasured thing but also quite fragile, and how some of the things that make it brilliant will also lead it to destruction. Were you interested in that aspect?

Yeah the show very much talks about that, especially with Beth. The obsessive quality and striving to achieve greatness can completely wear you out. You can lose track of the reason why you went into it and the love for this particular thing – we deal with chess but that transcends to anything really.

And then there’s the theme of almost wanting that to happen, being self-destructive almost intentionally so you don’t have to deal with the pressure of having to do it anymore – because you messed it up for yourself.

I think that’s done quite well in the show actually. With Beth intentionally messing things up so she doesn’t have to do it anymore. People do that a lot. That’s one of the big observations in the show that people might be able to relate to. And in that way becomes a kind of lesson.

How do you look after yourself mentally in your job – do you have routines or ways of thinking to help you cope with what you do?

Yeah it changes all the time really. You adapt and grow as a person. And discover certain things that are more important – but essentially you need a good grounding. You need a good base, a good family – whoever you choose to call your family – good friends, people you can trust, and who’s opinion you can trust. That’s important in a world that can be a little fickle. Acting can also be very fun and you can get carried away, so you need people around you to pull you back down when you need it, and lift you back up when you need that.

And also peace is important. Certain moments of calm, even if its day trips to the countryside or going down to the river or going for a walk. To appreciate the rain, the sun, the wind. Sounds a bit hippy dippy but I think that’s very important, especially in a world that’s very rushed and email focused. I think all those things are actually important for everyone!

On set, with the fast turn arounds of TV, how do you get prepared for intensity of that environments?

Actually TV’s slowed down quite a lot these days. Especially the Netflix stuff, it’s far more similar to film in terms of its pace. Same equipment, same size crews, same kind of budgets, it’s pretty damn close now. But I quite like a fast turnaround anyway.

Sometimes [on set] you feel very prepared and you then suddenly find you didn’t quite get it and you over rehearsed – you’re a bit annoyed about it but actually you realise that its just in your own head. Other times you come in and you don’t feel ready at all, the scene was thrown at you, or you didn’t think you were doing it until the next day – ‘Shit, I only have ten minutes to learn this scene.’ But you knock it out the park. You think I’ll do that next time but you can’t plan for that.

You get transported when you put the costume on. That’s how it happens for me. You literally hang up your stuff , your person up, and you put on this other suit to be another person for a day.

Did you do any chess playing with the other actors, when the grandmasters weren’t looking?

We did yeah. We’d always have chess boards out and people would be in the middle of games, take a photograph then go off on set. Everyone was in the mood for it. Scott and our DOP Stephen were both very good and several times we had to poke them to get going again. The whole crew was ready to go and they’re still engrossed in their game.

What are your skills outside of acting?

I love cooking that’s great, the flavours, and bringing people together. I love my motorbikes – I like riding, fixing them up, playing around with engines. I love woodwork and making things, drawing, painting. I think it’s important to have a balance of lots of things.

Another theme of the show is about mentors – have you had mentors in your career?

Yeah you don’t’ even notice at the time – people who have been hugely influential in my life. It can take a couple of years to realise I learnt a lot. You think you have everything down and are in a place where you know everything – especially when you’re younger and you’ve found a certain amount of success doing what you’re doing. You can be slightly arrogant but someone can come along and see that and help mould that, without you realising – these are the best mentors.

Finally, what’s your go to film for comfort viewing…

The Queen’s Gambit is a new Limited Series on Netflix debuting globally today.