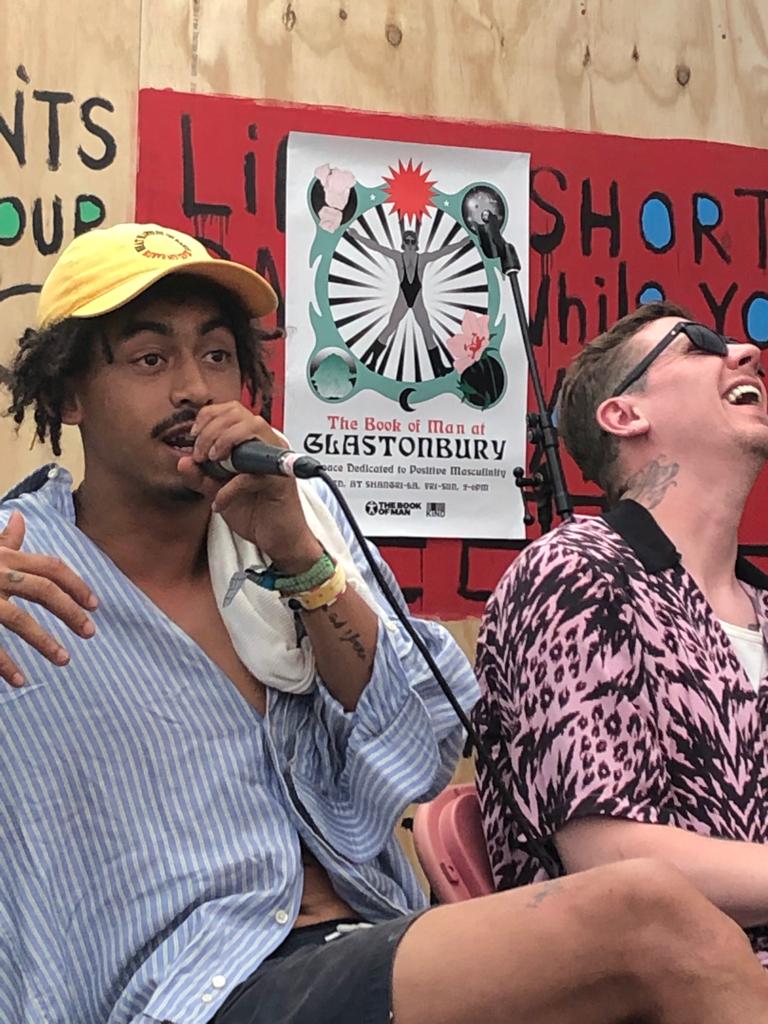 The Book of Man took over The Shed at Glastonbury, and found out some interesting new ideas for men today.

What a fine time we had in The Shed, a new addition to a resurgent Glastonbury Festival dedicated to positive masculinity in which The Book of Man hosted daytime panels. In the sweltering heat, The Shed was thankfully not a traditional shed filled with tools and pornographic magazines, but a safe space for old school expectations to be, well, shed as we hosted daytime panels to discuss the issues facing men today and give a platform to some inspiring people. Here’s what we learnt:

Professor Green stopped by to take part in a panel on masculinity and mental health, alongside singer-songwriter Frank Turner, actor and musician Jordan Stephens, and Krissi Murison from the Sunday Times magazine. As we talked about men getting in touch with their feelings more and being more affectionate with each other, Green firmly stated, “Men need to spoon more. I think we should just get over ourselves and spoon with each other. Can we all do it now?” 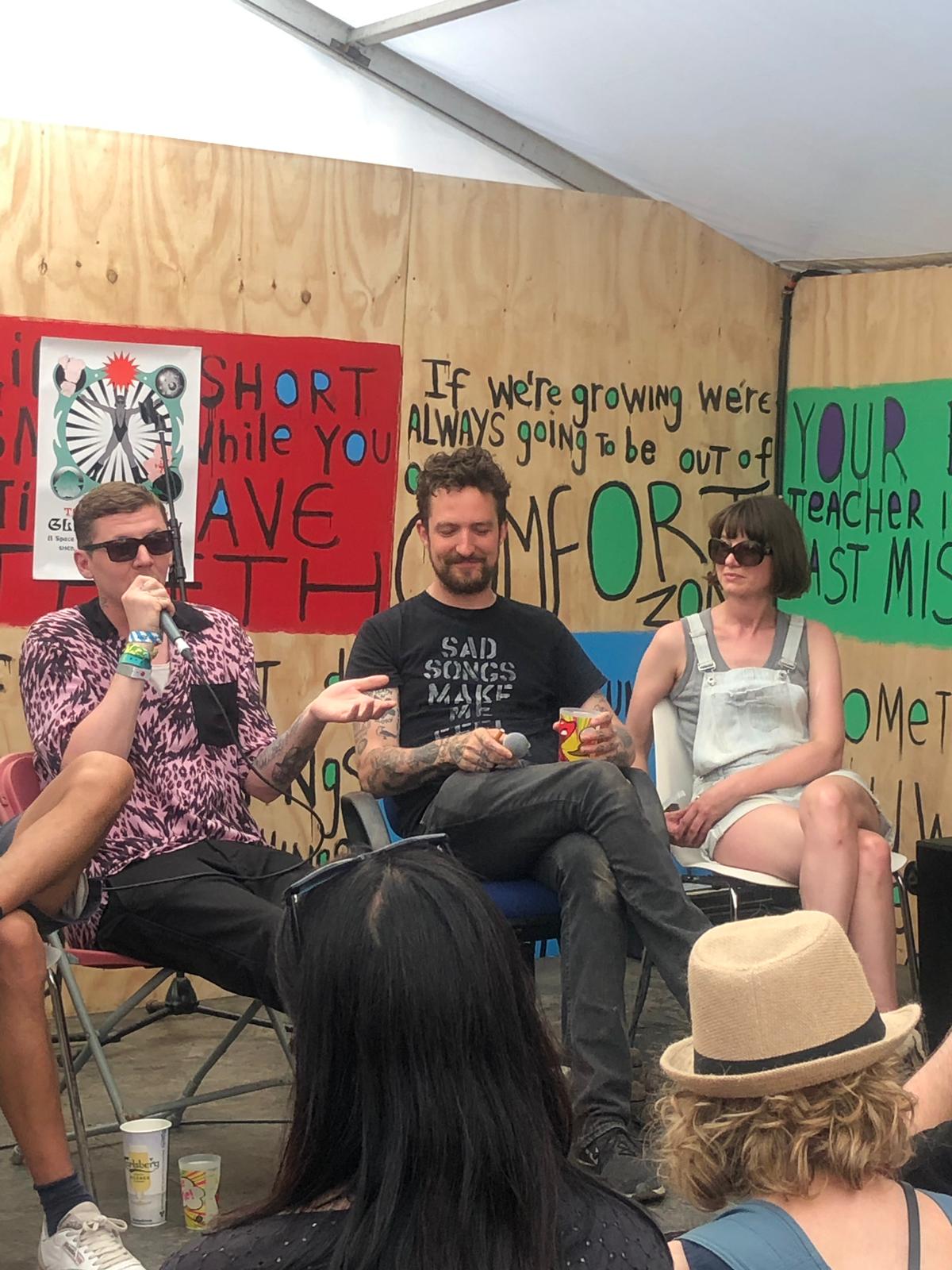 2. Men should kiss each other too.

While Pro Green didn’t have takers for his spoon suggestions, Frank Turner said he has, “started to kiss my male friends on the cheek. My family seem to get freaked out by it, but I think it’s a lovely thing to do.” He then shared cheek kisses with the rest of the panel. Note this was Day Two of the festival, before a water shortage meant the showers were turned off on the site. 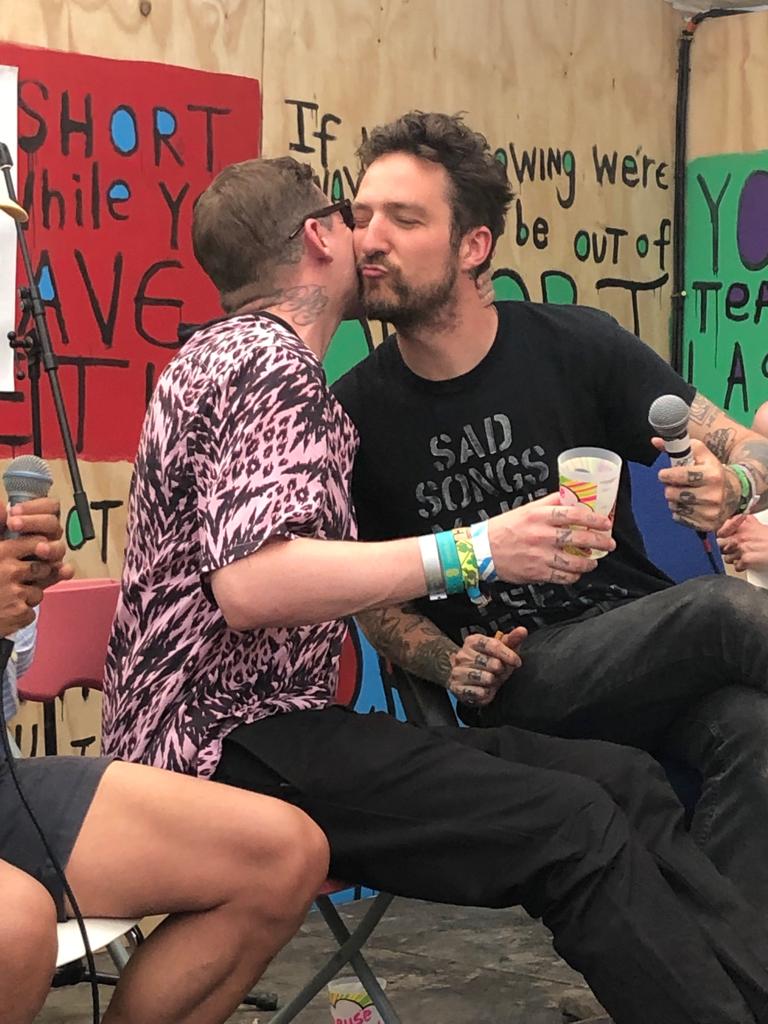 3. Men need to educate themselves about the harassment women face

4. We have to consider how we socialise boys

Krissi Murison, a former editor of the NME, talked about the level of day to day harassment she had to face in her previous jobs where certain old lad mags would regard women as “pieces of meat.” She also talked about how as a mother she was worried about her son going to school, “He is open to everything, he has no judgement on gender – his best friends are girls, he loves the colour people, he’s emotional, and I just know that when he goes to school he’s going to have that kicked out of him. Boys are taught to behave in certain ways by society.” 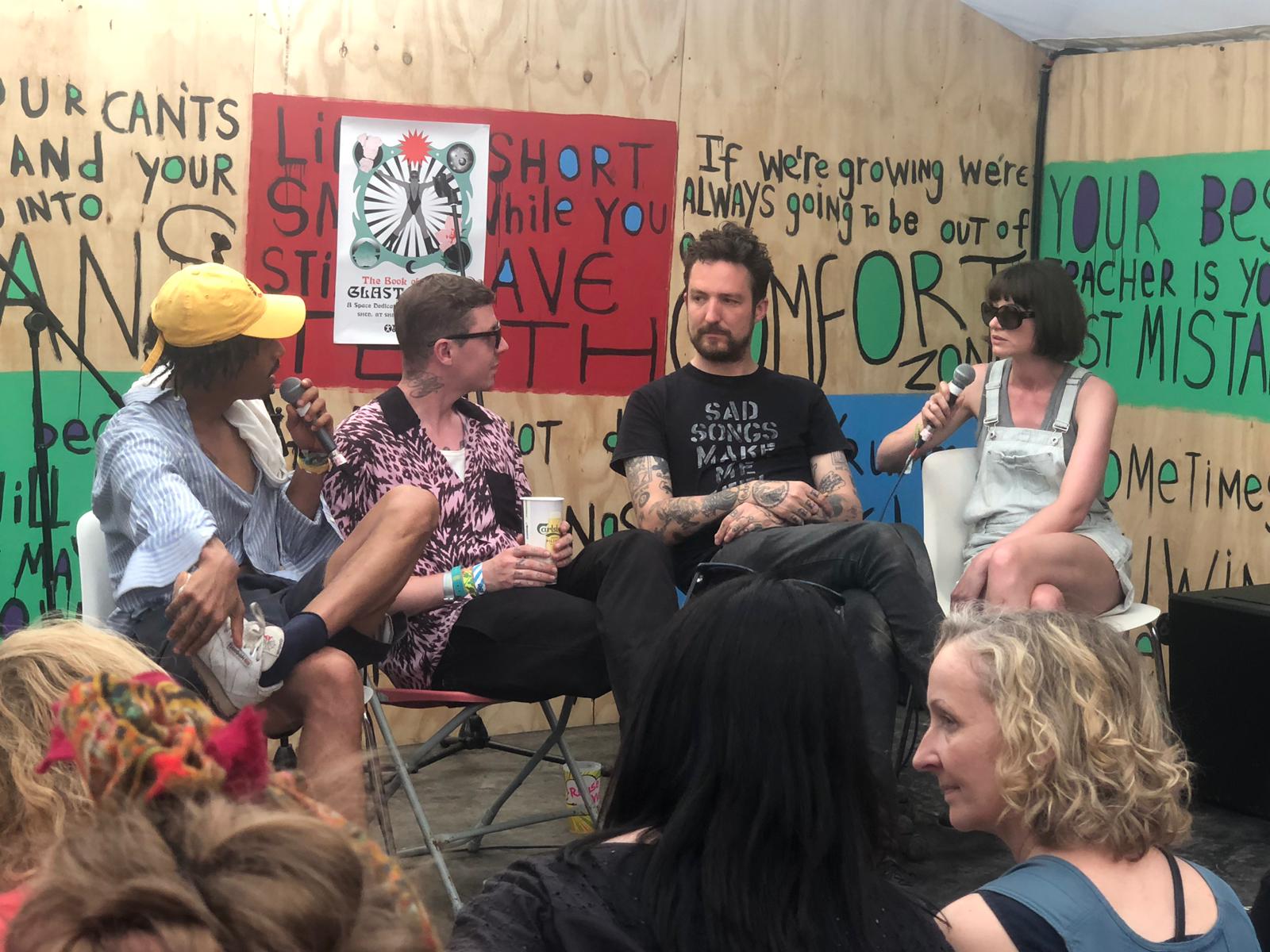 Just check this out from the heroic Jordan Stephens…

5. Pop cheese is a great uniter of people

Jordan Stephens was very worried about his Saturday night DJ set in the The Shed, anticipating his usual pop playlist would go down like a lead laughing gas balloon at a festival where away from the main stages it’s all about serious jungle and drum n’ bass till 6am. Indeed when he started, there were 3 people in the room. Then The Book of Man went to buy a pint, came back 5 minutes later, and found we couldn’t get in – the place was rammed with people going batshit to The Backstreet Boys. Here’s a glimpse of Girl Power hitting The Shed…Go on, Jordan!!

6. Finding missing people is all about creating publicity

The man behind Art Wars, Ben Moore, came to The Shed to talk about his decade long search for his missing brother, Tom. When not making and curating art, Ben works with a charity called Missing People, which helps families who have had members disappear, as well as those missing folk find a way back if they need it. “When people go missing it can do strange things to the people left behind. Even though you may be 99% sure they’re dead, just having 1% chance gives them hope, and something to cling to. It’s about coping with loss.” Ben told us that publicity, making national news, is crucial in missing people cases, which is why as well as his eye catching art pieces, like his Pete Doherty crucifixion sculpture, he works to get missing people stories on shows like Britain’s Got Talent. At Glastonbury, he’d put posters up featuring paintings of missing people by leading artists, including this one of his brother Tom: 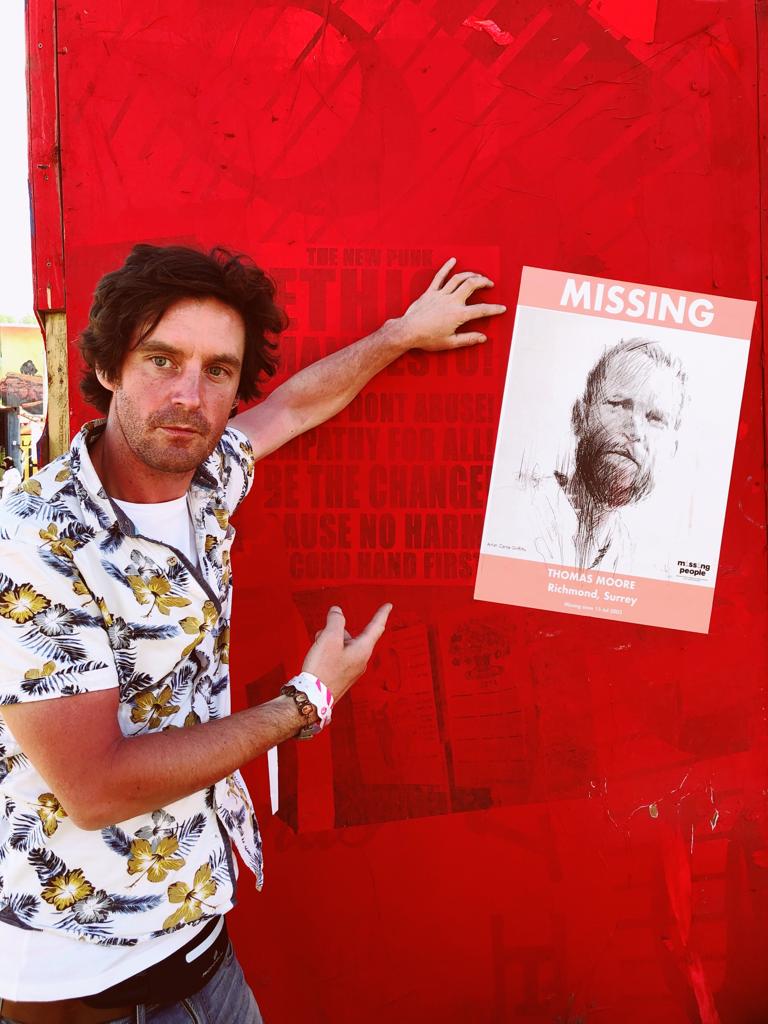 7. The world needs a Glastronaut.

Ben had designed an astronaut helmet for the festival, which had cameras attached to the side and screens inside, allowing him to walk around in it and basically cause havoc. Book of Man editor Martin Robinson also tried on his pink stormtrooper festival, which was the same colour as his big face after 4 days in the sun anyway, so no-one really noticed the difference. 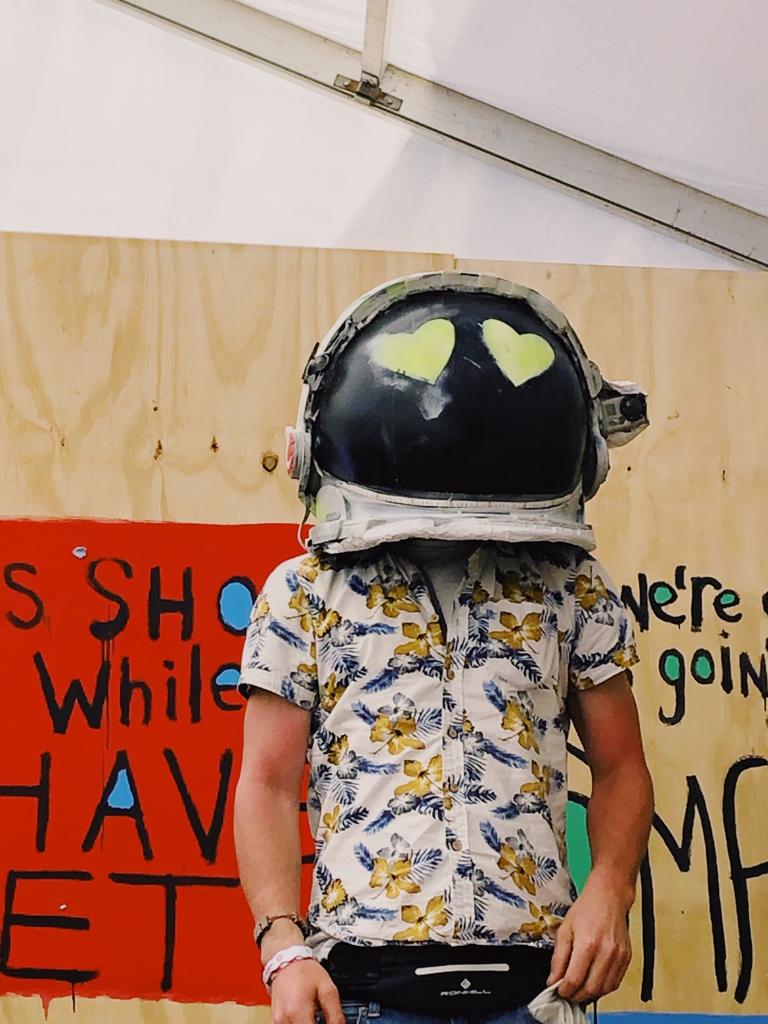 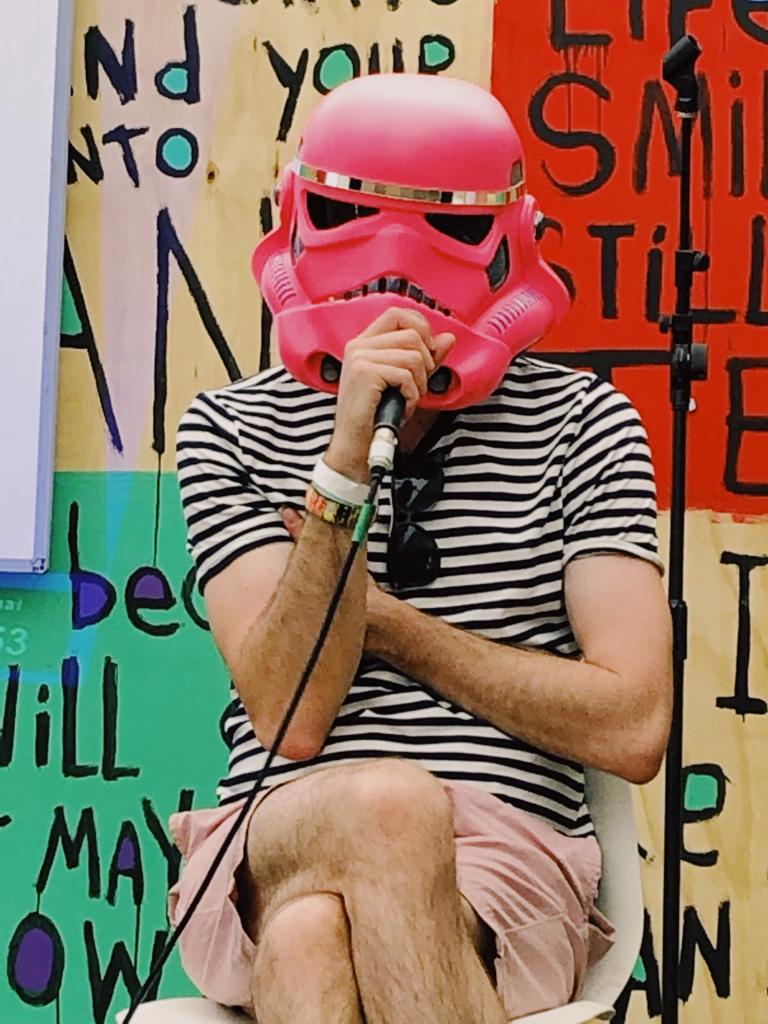 8. Giving your all is a glorious thing to see

Just check out the physicality of MC Dizraeli‘s performance in The Shed on the Friday night. The musician and mental health campaigner blew everyone away with his wit and energy…

Take a look at the slogans in The Shed, designed by British artist Adam Neate, which twisted the melon of many a visitor to the space. 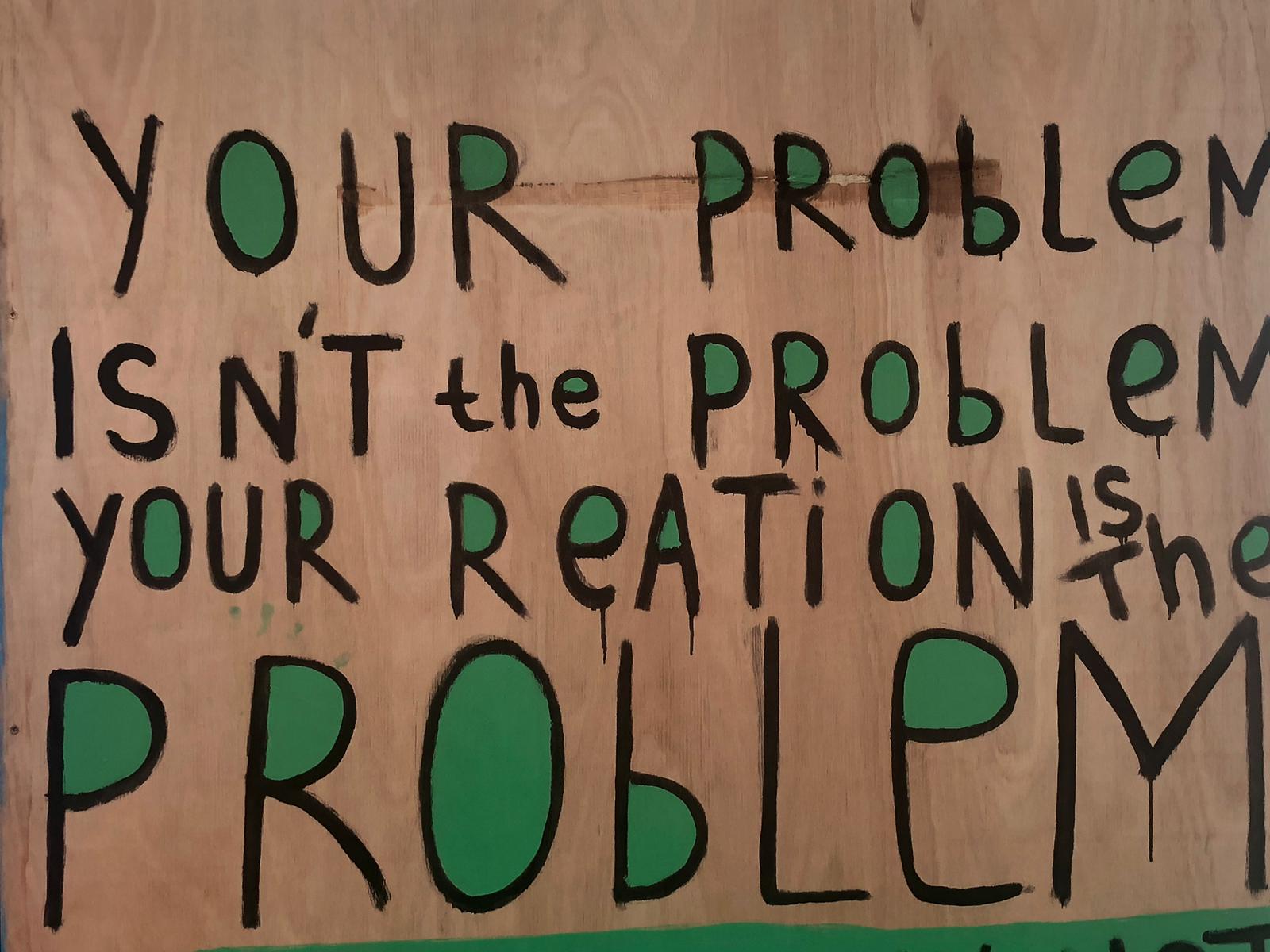 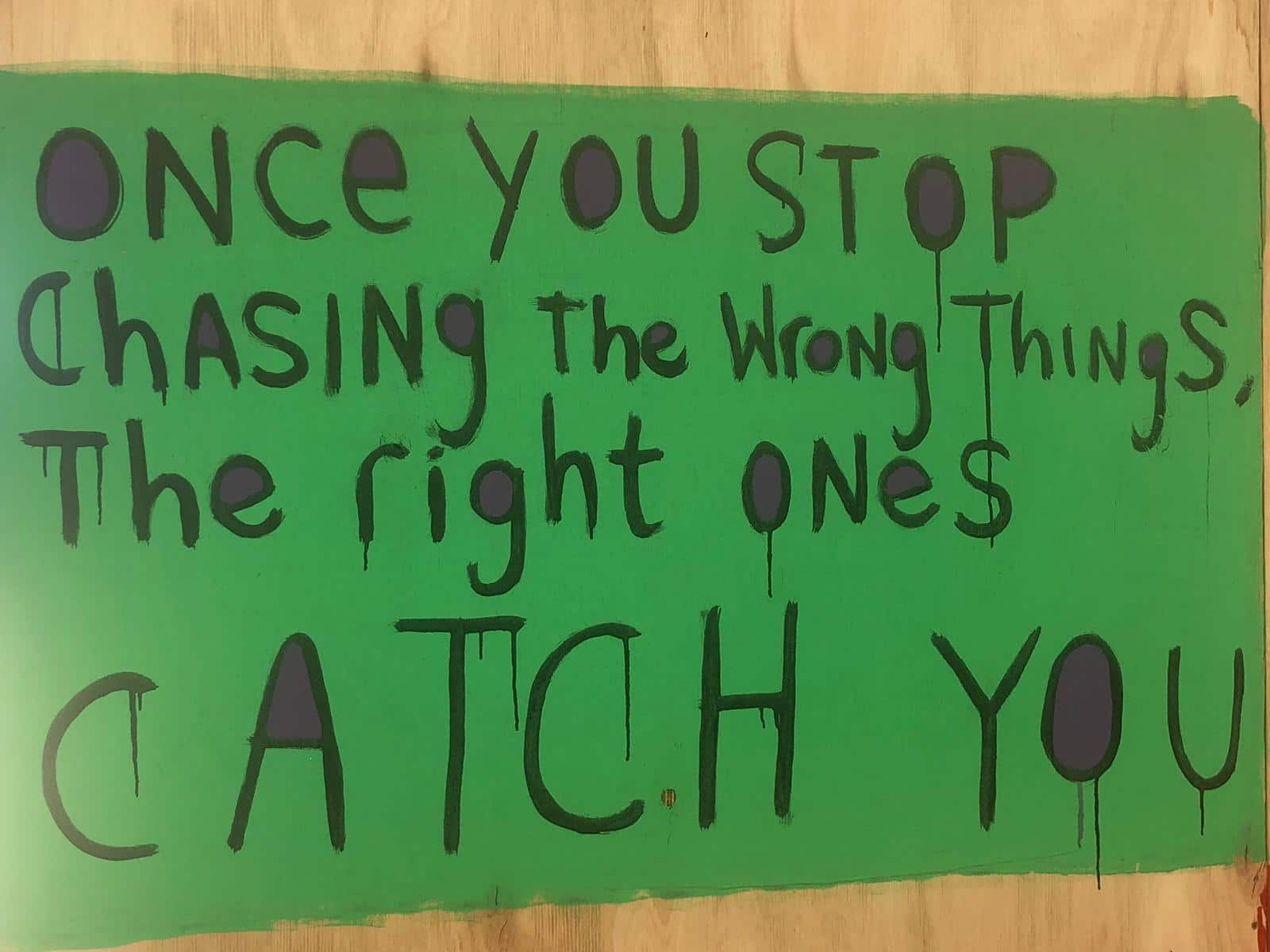 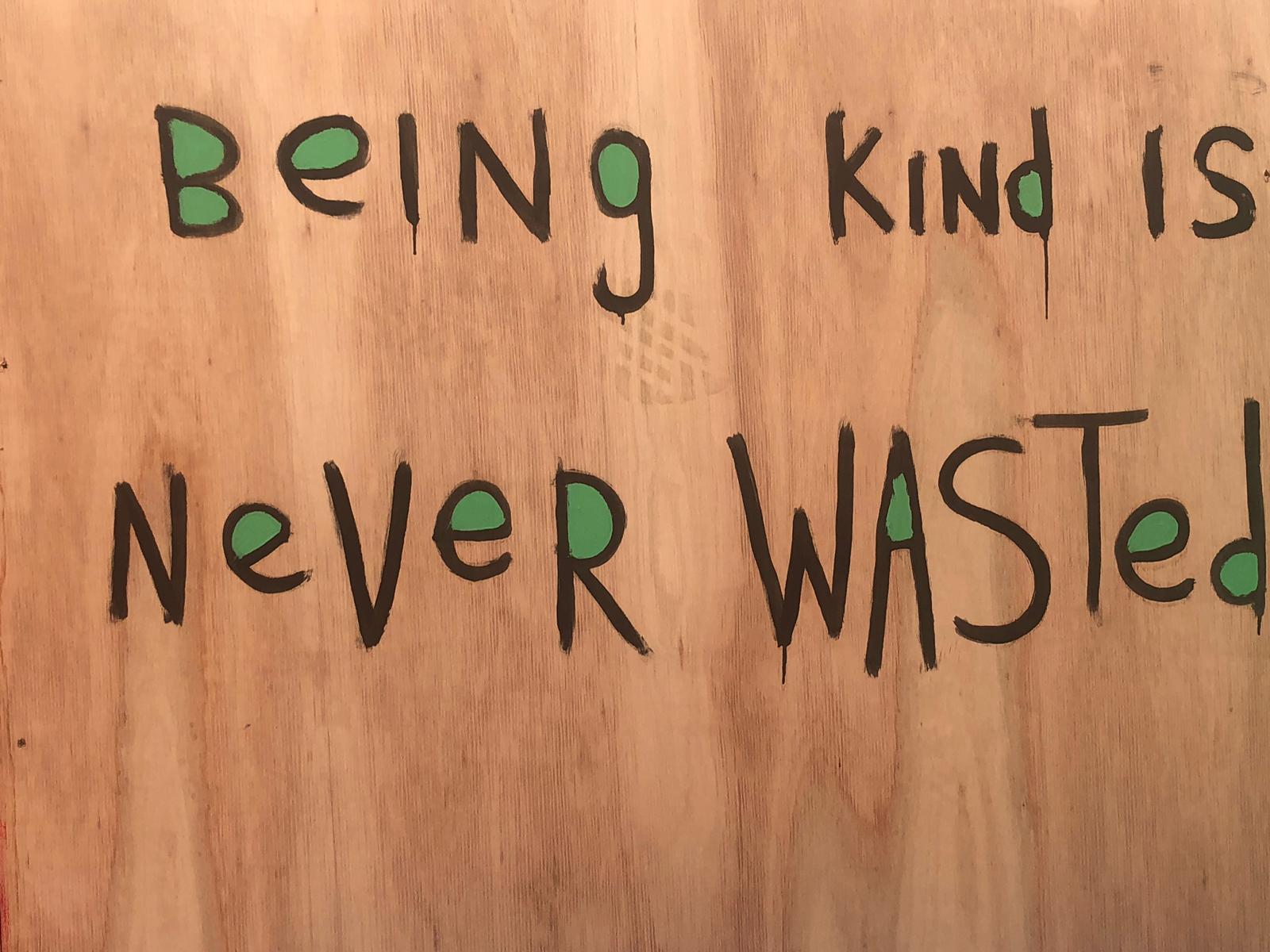 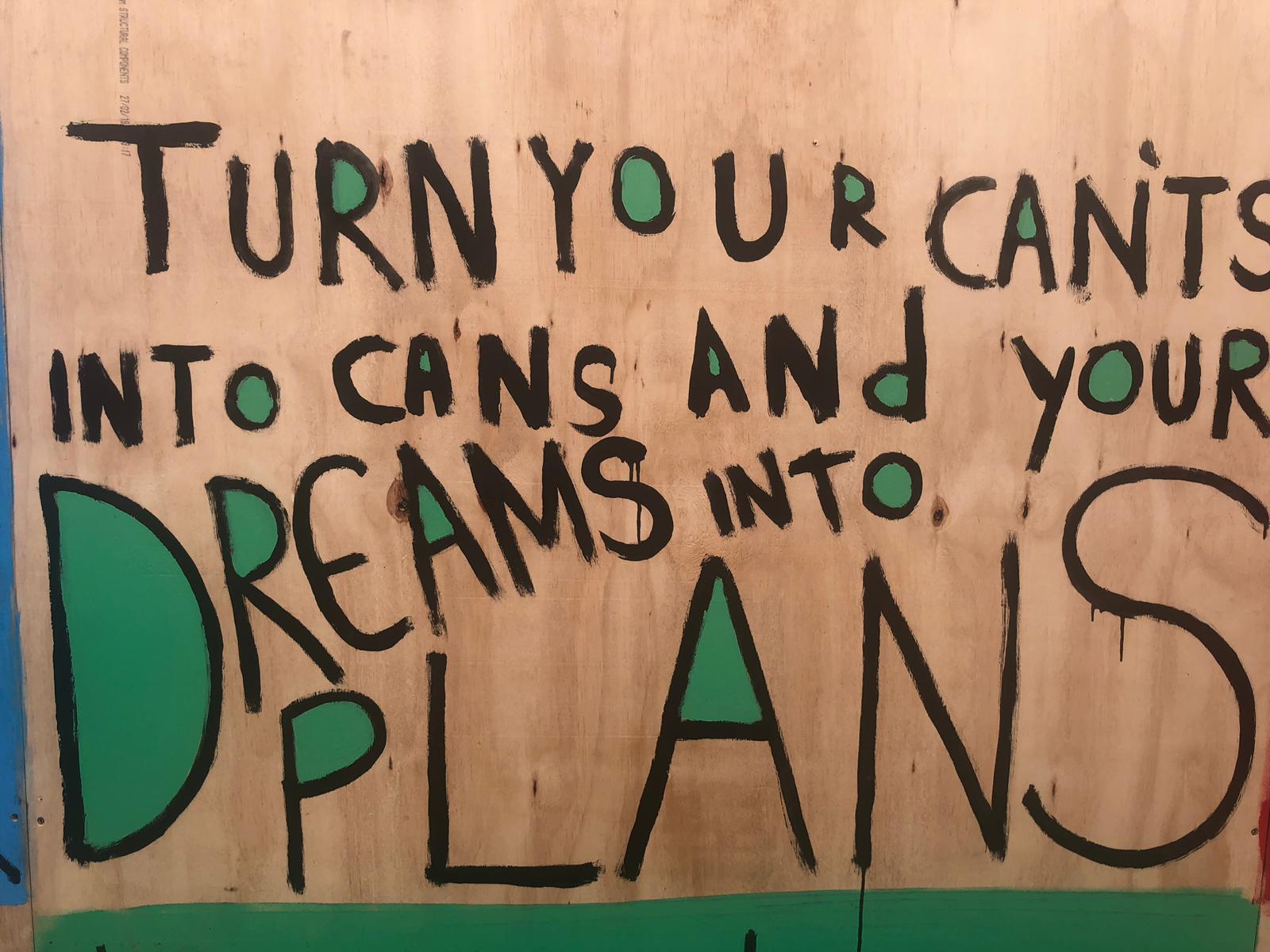 10. And mirrors can make people reflect even further…

The Shangri-La area of Glastonbury where The Shed was based, was enlivened by an art piece called The Wall of Reflection, which was created by architect and designer Will Sandy and photographer John Mannell. The clever installation featured mirrors which contained negative slogans like ‘Man Up’ or ‘Grow a Pair’ if you approached it from one direction, and positive slogans if you came from the other way. It was all about changing perspectives and considering the effects of words on your identity. The pair were inspired to create it after attending one of The Book of Man’s events at our Festival of New Masculinity, which means we can take a cut of any sale of the piece, right lads? 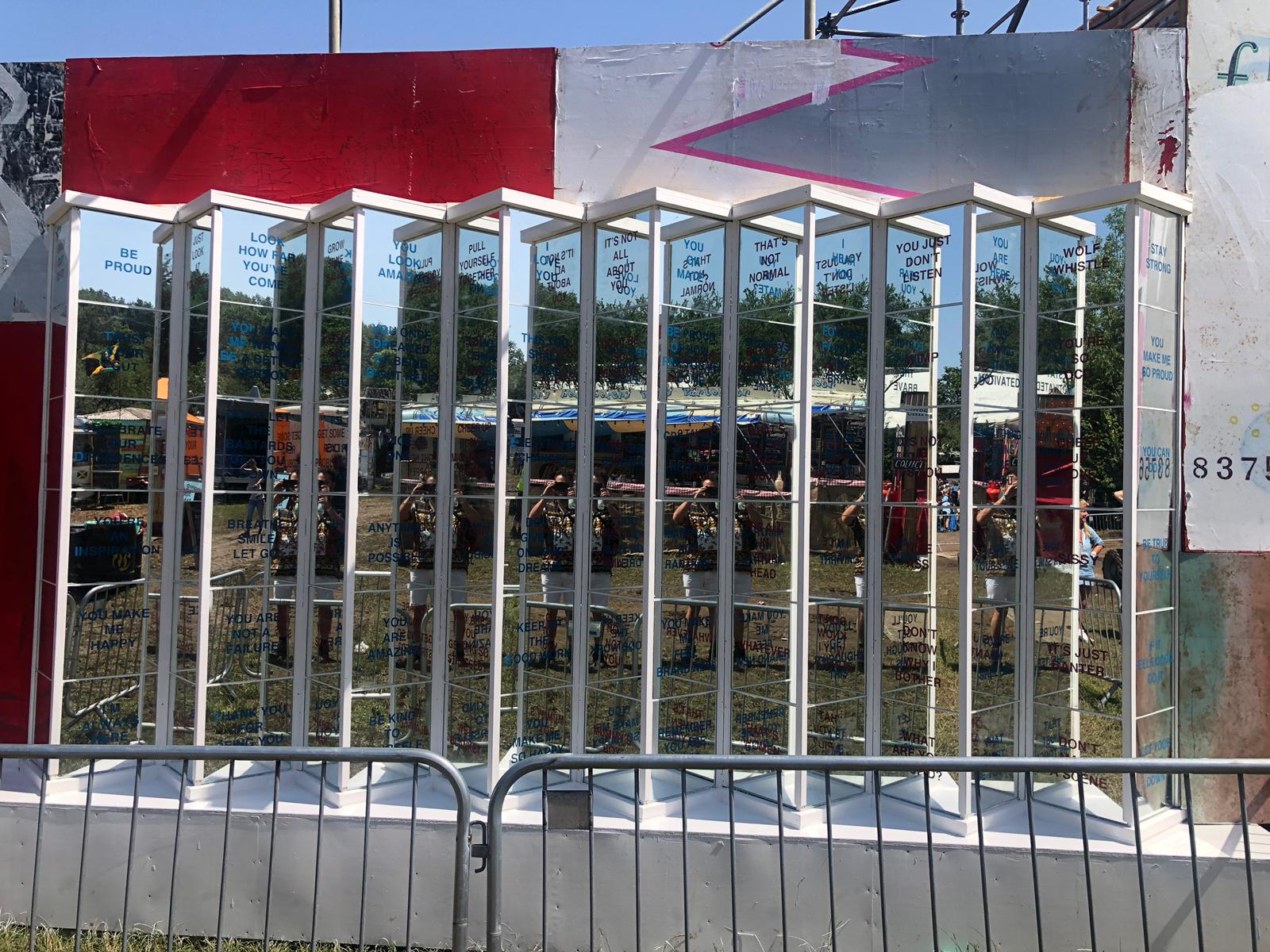 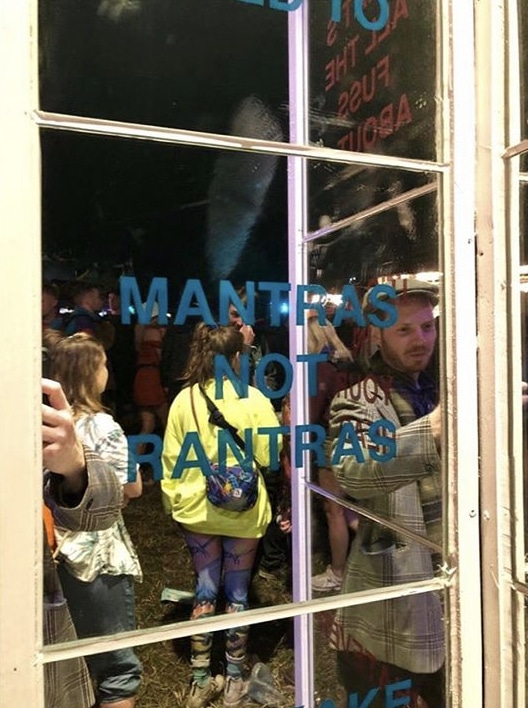 Mez from the excellent punk band LIFE stopped by The Shed to talk about the Clash-inspired socially conscious music he writes, and the work he does with The Warren Youth Project, an independent charity offering support services to vulnerable young people in the Hull area. Mez and a couple of his bandmates help teach the kids creative and life skills to help them through mental health and addiction problems. Hearing about a young band like LIFE working in this manner was truly inspiring. Check them out. 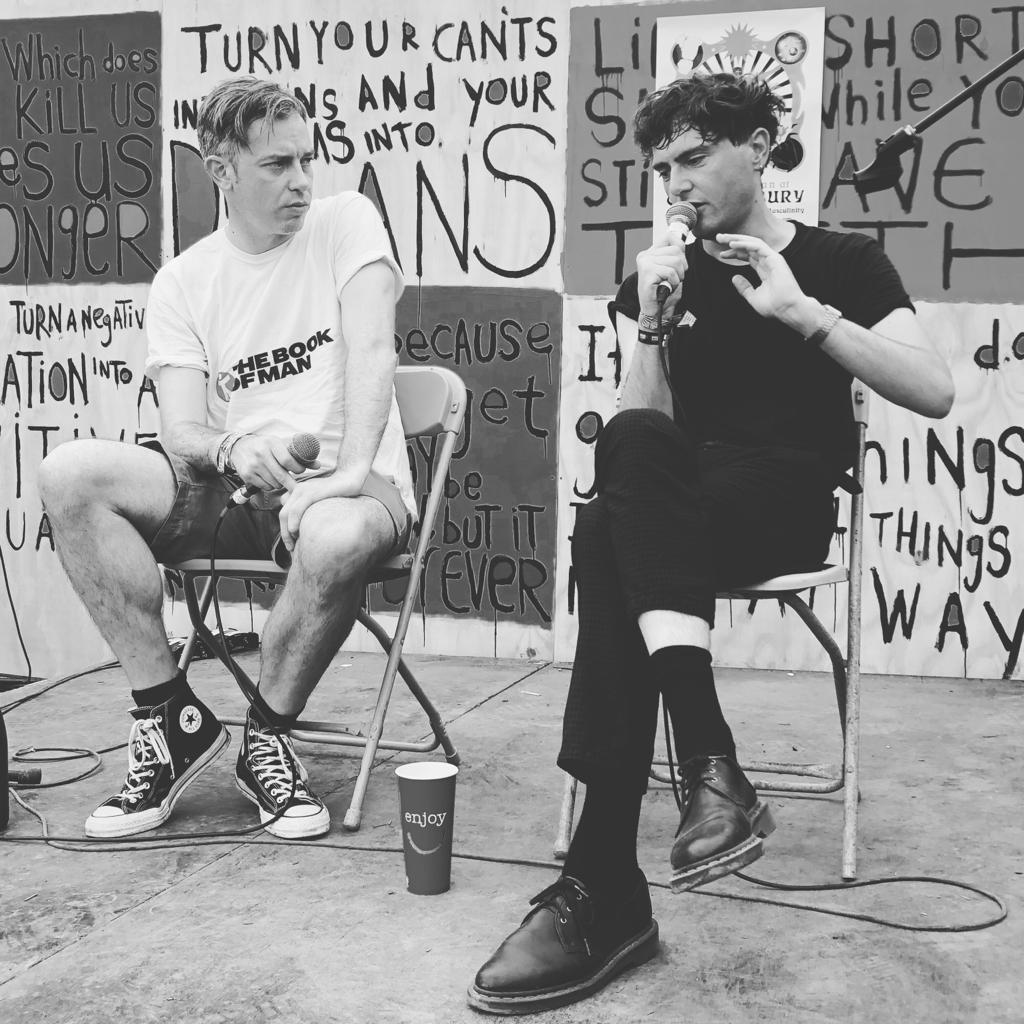 12. Social media – and beatboxing – can be good for your mental health

Beatboxer SK Shlomo came to talk to us about his recent TEDx talk, ‘How Social Media Saved Me From Suicide’. After suffering from severe depression and addiction problems, he reached out on social media for support and found such love and understanding that it transformed his situation and provided the impetus to record his upcoming debut album.

He also treated us to a sneak preview of the set he performed on the Other Stage the following day.

13. Don’t be A Dick was the essential take home 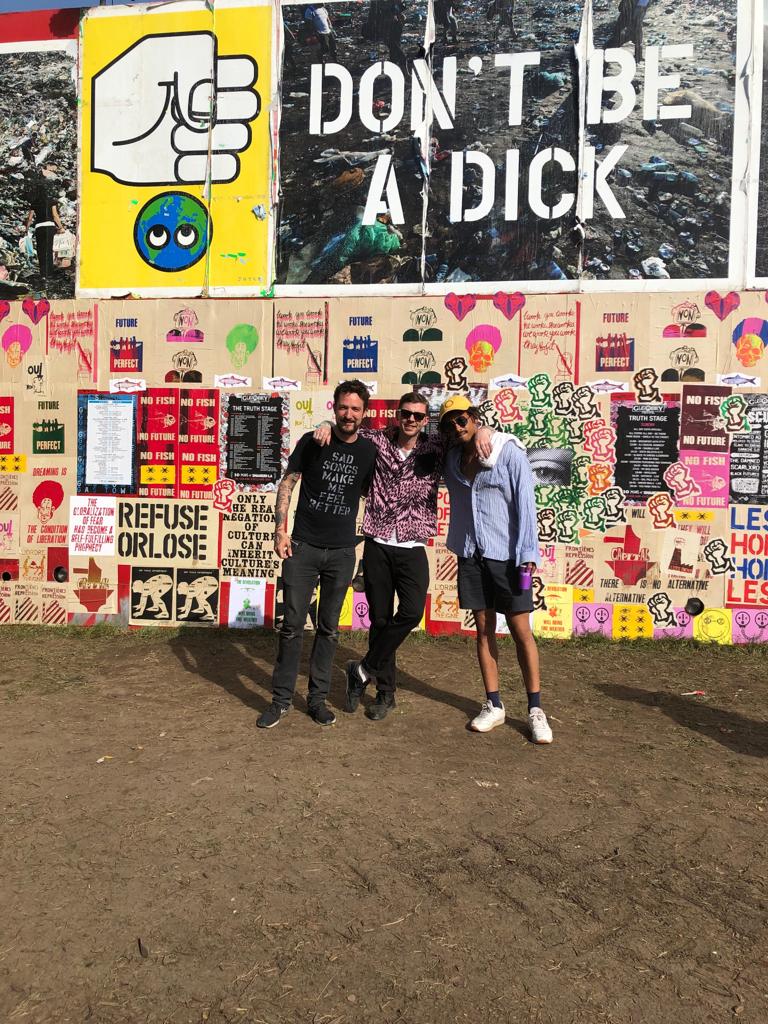 Thanks a million to Moses Powers and the Shangri-La team for inviting us to be a part of their amazing area. It was a real privilege and meant a lot to us. Thanks to everyone on the panels and all visitors who came along, you were amazing.

Sign up to our newsletters for the latest stories, tickets for our events and special offers...