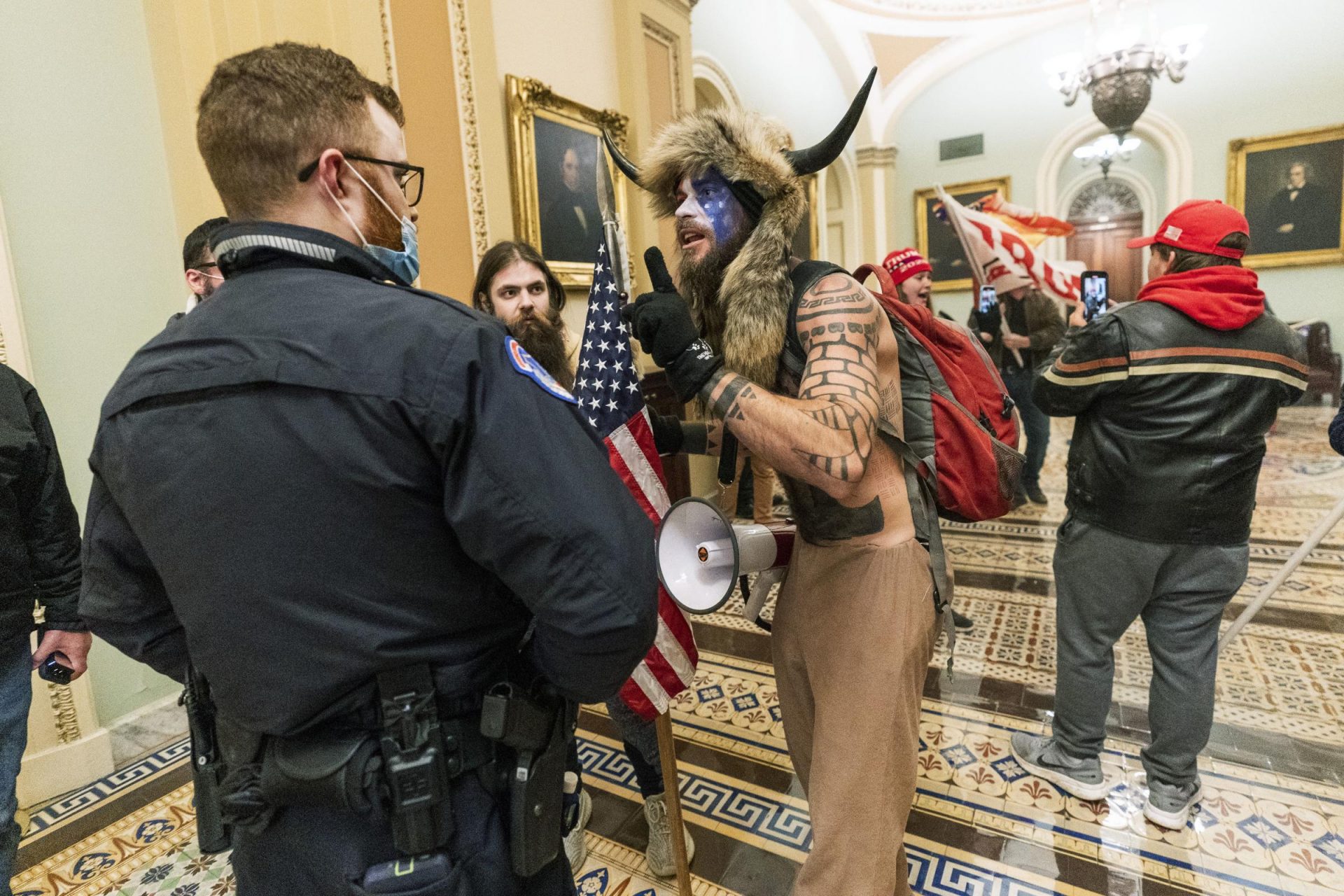 What to do about America’s angry white men at the gates?

Gary Barker - author and global voice for engaging men in healthy masculinities and gender equality - writes a powerful story about the disaffected white men who terrorised the Capitol and what comes next for Biden's America...

A week after angry men stormed the US Capitol, Joe Biden was sworn in is as US President and quickly put into motion a series of immediate and planned reversals of Trump-era policies on COVID-19, the climate and immigration. As relieved as many of us are with these changes, I thought this: what will we do about the millions of angry white men in the US?

As we have put in process the investigations and arrests of those who invaded the Capitol, we too easily ignore this: 17% of Republican voters in the US supported the insurrection, and 74 million Americans voted for Trump. Most of those voted for him twice, knowing what he stood for in his othering and hateful rhetoric and the policies that followed. We also know that white men, and particularly white men with less than university education, disproportionately voted for Trump. He is the angry white man’s angry white man.

When the men and women stood outside the White House listening to Trump’s exhortations, as some of them stormed the US Capitol, as they have continued to claim the election was stolen, I think this: I know these men. For they were mostly men, white men, like me. When I say I know them, I don’t mean I knew any of them personally. Rather, as I heard them interviewed and saw the images replayed, I recognized in their faces men I know, uncles, cousins, friends from high school.

Who are they? I am reminded of fellow students who threatened me with violence when I wrote pro-gun control and pro-abortion rights editorials for my university newspaper in a small Texas town. They told me if they saw me outside the building where we edited the newspaper they would be waiting for me, armed.

I remember the young men who pushed me against the wall in my high school, and kicked me in the groin, demanding to know if I was on their side, or if I was one of those “commie, pinko f*gs”. This was the same high school where I witnessed a school shooting, one student (white male) killing another (also a white male), over a girl, it was said. The reason was far more complex: access to handguns, an underfunded suburban Texas school system ill-equipped for the picking up the pieces of a nearly inexistent social welfare system, and histories of family poverty.

As I see the ongoing Trump-boosted rage, I think of my best friend in my suburban Houston high school (a white guy), who was progressive when I met him and steadily turned right wing after his father lost his pension plan. The oil company his father worked for went bankrupt, another casualty in the volatile Texas petrochemical industry where many fortunes have been made, and many lost. My friend came to believe that the government was a waste of tax money and that only “undeserving minorities” got any benefits. He died in his early-fifties, of a chronic, undetected health problem that could have been treated if he had access to health insurance that had recently become available under the Affordable Health Care Act.

I think of cousins and uncles with uncertain job trajectories and negative equity in their homes who began to listen to angry white men radio talk show jocks, and to hang out with friends or marry women who listened to the same talk shows. In recent years we scarcely talk unless I go to great lengths to only listen and not argue, even as they feed me the falsehoods they have heard that COVID is nothing more than a mild flu and that progressives are using it to restrict freedoms and that hospital ICUs aren’t full.

The challenge is that the white men at the gates don’t see the big lies they have been told, or don’t want to. The angry men at the gates forget that our founding Constitution stated that only white men who owned property (which at our founding meant men who also enslaved people) had their rights protected. Unlike post-World War II Germany, we’ve never had national reparations for slavery, nor for the Native Americans whose land was stolen and their ancestors massacred. Our legislation to advance economic and social justice for African Americans and Native Americans, and immigrants has been piecemeal and incomplete. We have never enacted a constitutional amendment affirming full equality for women and for individuals of all sexual orientation and gender identity in all corners of life.

The angry white men at the bottom or middle of the social and economic order have been encouraged since our founding to see themselves as superior to women, and to believe that their interests were more aligned with the landowning class than with recent immigrants, women, and the formerly enslaved. Yes, some of the men who stormed the Capitol and who voted for Trump twice are men of means or at least solidly middle class. They fear that progressive policies mean they will lose out, or they feel they are entitled to more. But others, millions, are men and women who are angry because of their humble and thwarted desires to own a house, care for their families and have a steady job.

The problem, indeed the crux of the problem, is where the angry white men (and women) turn their anger at their perceived unfulfilled American dream. They have become, in the words of Amanda Gorman, the first US National Youth Poet Laureate, who spoke at Biden’s inauguration, “… a force that would shatter our nation rather than share it.” As thoughtfully analyzed by Arlie Hochschild in Strangers in Their Own Land, and Jonathan Metzl in Dying of Whiteness, their racial resentment is such that they turn against people of colour and against policies that would benefit themselves, such as national health care, rather than join forces to create a truly inclusive nation. Indeed, as masculinities scholar Michael Kimmel warned us in his 2013 book, Angry White Men, the extent of their ‘aggrieved entitlement’ is a force we cannot ignore.

I lead an organization that works internationally and in the US to engage men in discussions about their privilege as men, to understand how men need to be part of achieving equality and ending violence against women. In recent years the MeToo movement brought a much-needed reckoning to men’s violence against women, just as the expression “toxic masculinity” has been a wake up call about how we raise our sons. That is a good thing. But how do we respond when the same angry white men at the gates argue that we hate men and that feminism, or anti-racist work is not needed, or has gone too far? Or when they say: what about my needs? What about my failing health and my lack of a job? When more than a million men post dislikes when a brand like Gillette dares question the dominant ways manhood are portrayed today? Can we call them out for misogyny and racism, as we must, while also calling them in to be part of building a more just nation?

As challenging as it is, we must think about the large group of disaffected white men, and women, in the US. Never instead of looking at the disproportionate unemployment, police violence, incarceration, income inequality and health disparities that men and women of colour in the US face. These are not oppositional beliefs. We must look at declining job prospects and rising inequality (and the many other factors driving white, right-wing anger) and we must acknowledge the urgent need for justice for people of colour in the US.

We must, as Biden has sought to do, change our language, including some of the words I am using here. These words, as clarifying as they are, immediately end any conversation. Angry white men, toxic masculinity, and white supremacy, as accurate and real as those expressions are, don’t help bring disaffected white men, and women, along with us. We need to keep the cause behind the terms but we need to find a language of calling in.

We need big tent policies, as well as policies that acknowledge and redress the real, deep and lasting harms of slavery, racial injustice, harmful immigration policies and misogyny. We need reparation, affirmative action and we need policies on the order of the New Deal. While clearly skewed toward helping white men have work, the New Deal was based in the simple idea that work dignifies, that work is both the doing – the building, the making, putting men and women to work in meaningful work – and the income and family stability it brings.

We need a national, collective education project. We need to build into our public schools from early childhood onward a telling of the true story of this country, the story of the oppression, and the oppressed, the suppressed and forgotten stories of the Underground Railroad, the true stories of the suffragette movement (including its racial biases), the story of Native populations and genocide, and the stories of individuals of sexual minorities silenced and harmed.

I must offer this confession: I do not know how to talk to angry white men. Having grown up mostly in the South, and having seen their violence, having seen a crow bar fly by the back of my car window thrown by one of them, I fear them, and often disparage them. They see me as a traitor if they read what I write or know what I do for a living. And it is easy to stay in my self-righteous progressive bubble.

I am challenged again by the words of Amanda Gorman when she said: “We will rebuild, reconcile and recover, and every known nook of our nation called our country, our people diverse and beautiful will emerge.”

I do not want to talk to the angry white men and women, including those in my family. The conversations are difficult. Challenging them without walking out of the room is, for me, nearly impossible. I do not want to go to their nooks. Most days I do not believe there can be reconciliation. But I know I must understand the paths that took the angry white men to resentment if I am to do my part in calling them out of hate, and into justice.

Gary is the co-founder of Promundo, a global organisation teaching men and boys about gender equality and non-violence.

For more on Gary, visit garytbarker.com

For more on Promundo, visit www.promundoglobal.org