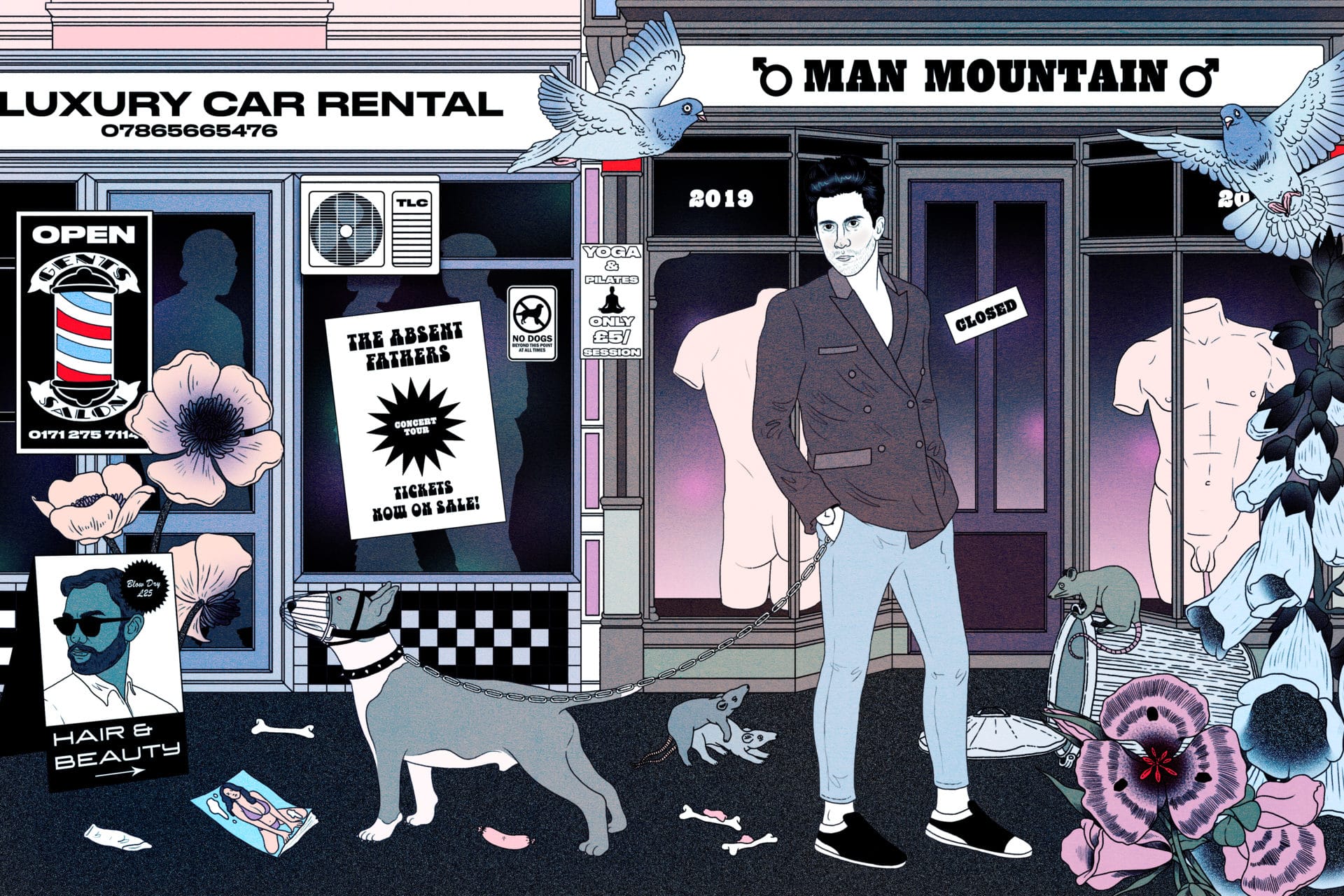 Yes, we're delighted to say the comedian and expert dissector of men's lives, is The Book of Man's new columnist. His first column is about male posturing. Just check this out...

Hi, Russell Kane here. Yes, normally I’m a stand-up comedian, but before that I was a writer. I loved it. Me! A writer!? I was the only cousin in my family to get an A-Level, let alone bag a degree or do a posh job. I come from solid Essex stock comprised of Alpha-males, builders, hard-nuts, coke-heads, convicts and studs – yet I’m a weedy nerd who like girls, tea, Dungeons & Dragons, oh, and Ibiza techno. Why am I splurging all this? Well that’s sort of what this first column’s about: posturing – presenting to a room a version of ourselves and hoping that room approves of what we offer. Or fancies it. Or is scared of it.

I’ve got this theory about what’s happening to blokes in 2019. As the much-needed deeper focus on women’s lives and women’s representation gets fully underway, a lot of blokes are asking: okay, cool, so who should I be? We have to be careful on this territory, we don’t want to get stamped on with Germaine Greer’s dirty boot. And Christ, I have a daughter, so no one wants Beyoncé to become president more than me (with maybe Holly Willoughby for Prime Minister); but it’s possible to fret over blokes’ roles, while at the same-time celebrating all that is female. Yes, I know. Imagine… holding two internal debates at once. Such mental gymnastics would blow Donald Trump’s mind. He’d be so stressed he’d have to adjourn to his private quarters for a trauma wank with his tiny hands*.

So here’s what I think about the challenge women face. It’s bloody massive. It’s a giant horrible mountain with slippery surfaces. One unscalable surface says, ‘Be the perfect mum’. Another insurmountable ledge says, ‘Smash your career’. Oh, and for the Instagram girl generation there’s this other ridge, covered in shit, which says, ‘Be a minx and waggle your boobs online for likes’.

Women, we get it. And by the way: fuck that! Most men I know would perish ascending such a mountain. But here’s my 2019 point: at least girls have a mountain. As vile as it is, there it stands.

When I speak to the Scotts, Waynes, Lees, and Dans (my friends’ real names, lol), they can’t work out their mountain any more. The younger the bloke, the less of route they can detect. In the last 10 years – hell, in the last two years – being a bloke has become more amorphous**. Most men don’t even know if there is a mountain we’re supposed to climb anymore.

Seeking your self-worth from being ‘the breadwinner’ feels old-school, sexist. Urges to show off wealth, to ‘make wedge’, feels cringey and a bit ‘erectile dysfunction’ in disguise. Showing dominance? Are we supposed to? Is it more of turn on now if we’re totally calm, stable? But wait – why is Mr. Fifty Shades of Grey attractive when he cuffs his girlfriend and sticks a cucumber up her bum? Am I supposed to be ironically aggressive, because it’s a turn on, but a pacifist in reality?

Am I supposed to be hairy or smooth? Seriously. My balls. Hairy or smooth? Is a sense of humour really more important than a six-pack? Or are girls just lying to make wobbly-bellied nice guys feel better, while secretly wanted to be rodded like a blocked drain by a ripped stud at Ocean Beach Club in Ibiza.

And being a Dad is more confusing than ever. Society and prevailing theories want us TOTALLY and EQUALLY involved. Amen to that. Yet the reality of our country’s laws, and men’s experience of the day-to-day – in the home, the office, the restaurant – tells us different. Most of us end up feeling like a shit assistant managers for the first two years after the birth; an annoying add-on, a bit in the way, and in the end, many of us suffer the same fate: watching porn in the spare room while the baby takes the place in your bed, before being labelled ‘the selfish pig who didn’t care enough’. Wahhh.

Is it any wonder so many men say they’ve mislaid themselves? Feel it. Get depressed because of the feeling. We’re taking longer and longer to grow up and men were already slow at it. Most girls I knew had the confused, messy bit of their life out the way in their twenties, maybe living with a controlling drug dealer bastard who treated them like crap. But with the men I know… crikey, a man is quite capable of being in his 50s, living in a studio flat in North London, masturbating into a sock, biriyani cartons at the feet, and thinking, “You know what, I might have lost my way here…”

The role of men, our place is changing – and it IS for the better, promise. It’s just we’re a bit more shit at talking and discussing. We act out, display, rather than share and confide. That’s why stuff like BOM is important. It forces laconic stewers to at least enter into dialogue with themselves. Ask: what is important for me, how should I be?

Of course, the answer is dispiritingly simple and graft-heavy. Every person is different. There is no single FEMALE or MALE experience. We must adapt and change like the T-1000 in Terminator 2 now that we live in the post-modern world where all identities are valid, all is fluid; you take each person as you find them. And if you’re confused, that’s fine. Me too (I probably shouldn’t have said Me Too).

If we don’t authentically work out the shape of our man mountains, shallowness will prevail. I’m talking about tragic posturing. So many examples: steroids, loans, borrowed cars, faked hard-nuttery, skinny jeans on older men (me), danger flirting, Just for Men-ing (me), arse bleaching (not me), watches, cars… actually I’m gonna stop that list as it’s turning into all the things I like (except arse bleaching).

I believe all this fear and confusion is driving a renaissance in male posturing. It’s easier to put on a show for people than to communicate, to try and own a room (wait, that’s literally my job). We’re like monkeys, but with iPhones. Round where I live, younger men have taken to hiring Ferraris and short-term letting posh flats, getting themselves into terrible debt; hurting themselves when they do. Guys earning 40 grand a year are wearing 10 grand watches. Guys’ Instagram’s are filling with Business Class departure lounge selfies, six-pack gurning pics, and fabricated group shots at private tables in nightclubs. These aren’t so they can show you their happiness or connectedness, it’s to make THEMSELVES feel powerful – to posture. When Darren from Loughton drops a picture of himself in a Maserati cruising past Waitrose he gets a little dopamine rush up his waxed, fake-tanned spine. It’s a jet of hot piss shot against a tree to signal for other males: “I own this manor.”

For example, I’ve noticed an increase in the try-hard handshake. I host a lot of award ceremonies and there has been a disturbing increase in the ‘shake and turn’. That’s when a man tries not only to squeeze your hand, but flip it, so that his in on top. I mean, that really is prison behaviour at best. Baboons do shit like that. We are not baboons – although some of my mates are more than capable of a wank-and-chuck like happened to my poor nan at the zoo.

Men’s walks have taken a disturbing direction too. The wide-ghetto walk, taking up as much width as possible. The cockney head strut, pulling themselves along with the violent traction of the neck.

But perhaps most disturbing of all, is the billion percent increase in cocaine usage***. The pressure to be the loud, interesting, dominant one at the centre of the room with ‘all the banter’ is driving use of this silly, addictive, facile substance. I’m not anti-drugs, I’m just anti-bellend. It’s so bad that wherever I go men are in disbelief that I’m not ‘on the gear’. That’s how awful things have got. Anyone having a good time or with a personality must be a junkie… How else could you have the vim to join in. Sigh.

So what’s the answer? As always, it’s Kant. I say ‘Kant’ a lot – I use it instead of the C word, the way my Irish mates use Feck – but Kant was also a philosopher who wrote 1000s of boring words to get to the simplest point ever made: ‘Treat others as you would like to be treated yourself’. If you’re about to enter a pub, a meeting, a poolside, just pre-examine the strutting you’re about to do. How would you view another bloke doing the same behaviours? If you’d think “Wow, he looks like a legend,” then crack on. But be honest, if your real thought is, “Wow, what a prize cunt he would look,” then I urge you: use Kant and give it a miss.

Right. I’m off to piss against a wall.

*for legal purposes I have to say that his hands might be normal.

**that means ‘nothingy blob’ for all my Essex readers.

Click here to Russell Kane’s new book, Son of a Silverback. Or here to download the audiobook. 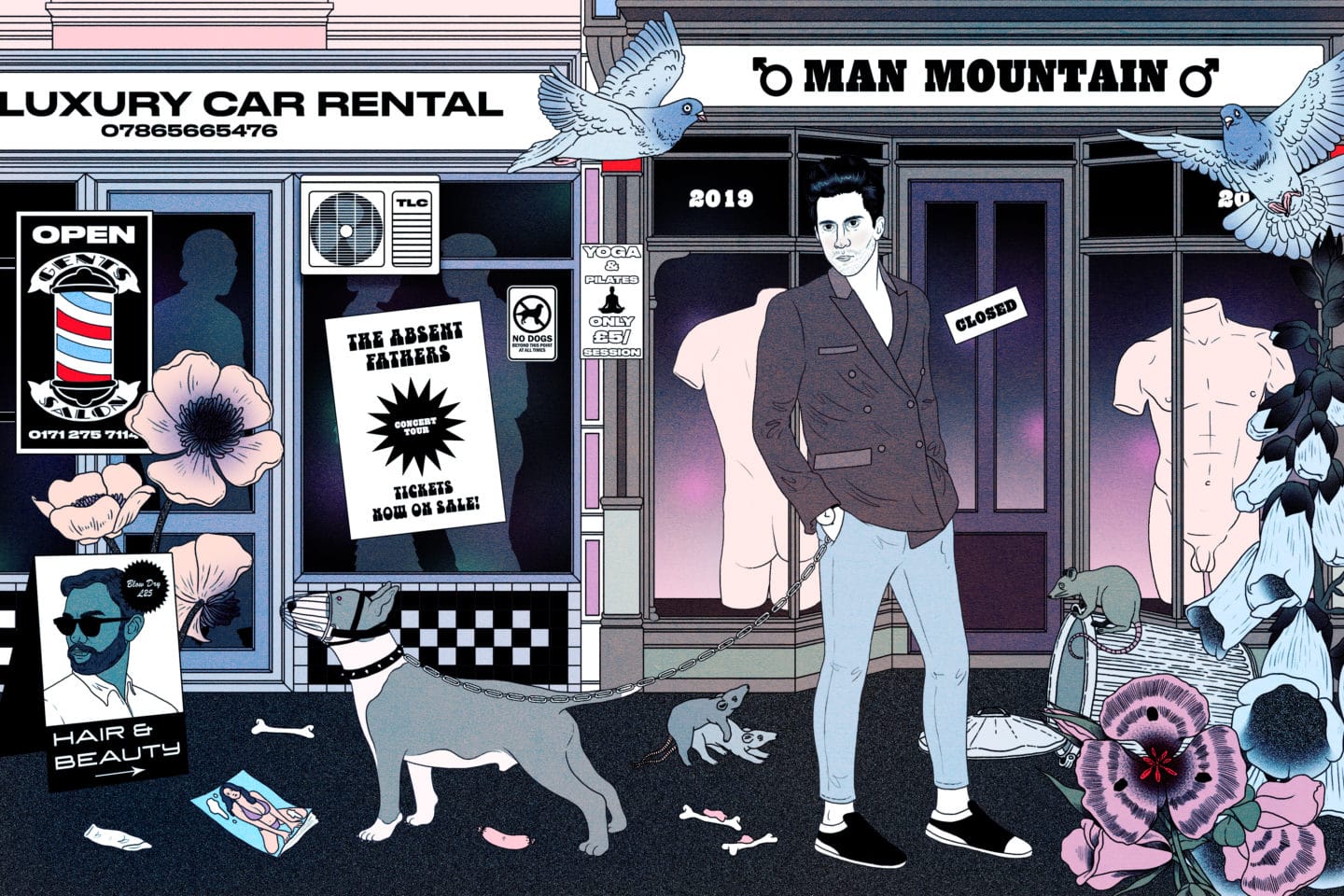 Sign up to our daily bulletins to read Russell's columns before anyone else. Plus, the best of The Book of Man, special offers and other goodies. 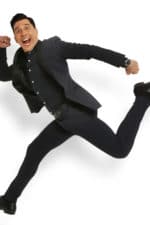