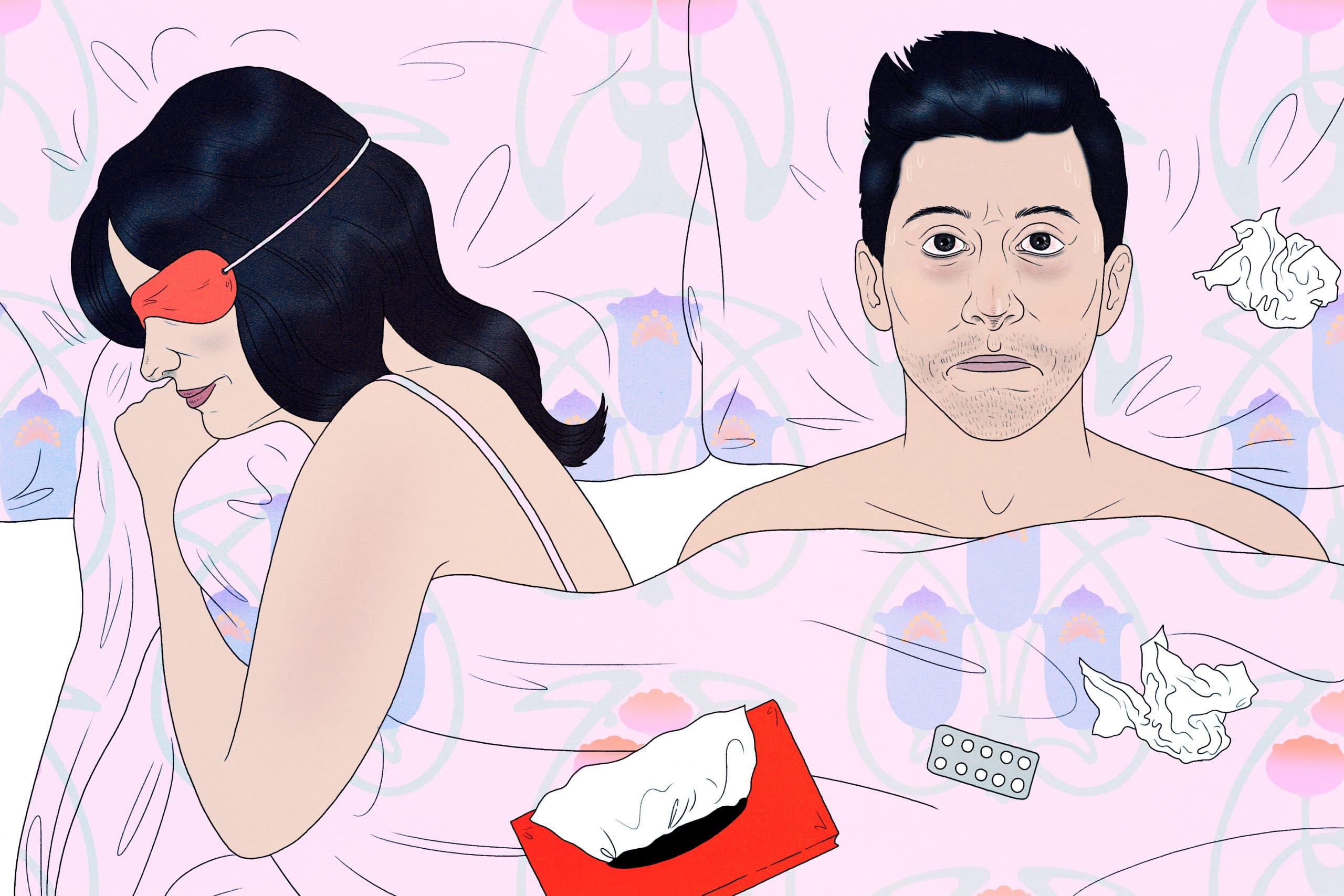 "There are two tribes of sleepers."

Comedian Russell Kane's latest column is about sleep, "that free gift of nothingness from Nature". Of course, when you are not a great sleeper like Russell, things can get annoying...

Guess what? Tonight, if you’re one of the lucky ones, not long after dinner, you’ll slip into a coma so deep that you’ll remember nothing when you regain hazy consciousness some time later. No, I’m not talking about a sudden head wound, I’m talking about sleep. That free gift of nothingness from nature: that IQ booster, that muscle builder, skin preserver, regenerator of injured flesh, canceller of illness, grower of babies. Sleep is the X-Man of the daily routine, supernaturally brilliant at what it does. Yet it remains a mystery: elusive, and sometimes eluding, other times impossible to achieve. How many nights have you said to yourself, just one more wank, that should knock me out; only to find yourself going again at the chafed ruddy stump of your manhood just two hours later in a further desperate attempt to milk yourself into catatonia.

Sleep is awesome. Some of our most precious moments are unknown and undetected – they are the foundations for you being a legend the next day. Or not.

It seems there are broadly two tribes of sleepers. Those who can fall asleep easily, anywhere (you might use the shorthand Smug Cunts), and the rest of us. Some of us in this second tribe are genuine insomniacs. Let’s set aside those poor bastards with medical or psychological issues which properly prevent sleep. The rest of us in tribe two, simply need: EXCELLENT CONDITIONS FOR SLEEP. Like a total blackout blind – just one photon of light is enough for me to writhe into awake-ness like a burning vampire. We need silence for sleep, proper silence – hear a pin dropping, and I can be awake for two hours worrying about interest rates, Brexit or Syria. Or worse, locked on a loop of planning and re-planning what I might have for breakfast, making lists of foods until the vampire slaying rays break through my imperfect curtain.

Nothing wakes Lindsey (wife) – in a nuclear apocalypse she would gently stretch as the radiation melted the flesh from our bodies and she’d say;

“Wow, I slept so deeply – did I miss anything?”

In the last few years I’ve taken to using a white noise app. I run it through a Big Jambox speaker. Wall-shakingly loud white noise which cancels out the noise of toddlers, and when I’m staying in London, my neighbours above me. Just the sound of their padding feet and joyful games at 7am fills me with a Tyson Fury, nay Liam Neeson, volume of vengeance. Many times I’ve fantasised about thrusting a steel spike up through the ceiling of my flat into the feet of a smiling neighbour loving life at 8am. Wankers – take that through your pilates mat. White noise has changed all that.

“What the fuck was that coming from your bedroom?” Asked my mate Wayne last time we had a lads weekend, “Sounded like plane taking off.”

Good. And screw all other noise.

The other main one which can affect us, the non-sleeper tribe, is temperature. When I did my first tour and earned about three pounds in the entire year, I put myself in debt by fitting air con in my flat. When I’m warmer than 20 degrees at bedtime, I’m not fun to be around. Sweat runs off me like Snowman Olaf from Frozen in a Sauna. I’m hotter than a stolen Hatton Garden diamond. I like a freezing death chamber of a bedroom. I like to see my breath on the air. When I see a thick 35 tog winter duvet I fantasise about stabbing it, shredding it in a deranged orgy of destruction. Lindsey, wifey, likes the room hot. Of she does, she’s an easy sleeper. A gecko in the humid night. She has a single heated blanket on her side of the bed – the sort of thing on which a vet would place a dying kitten. It pumps roasting waves of idiot warmth up into her instantly sleeping body – and I lay next to her, annoyed, even though it doesn’t affect me.

Caffeine’s a big one too. In my job as mental bastard running about jester person, I drink so much caffeine that when I piss, a Barista needs to hold my dick. Two espressos before I take to the stage, maybe a third in the interval. When I hit my pillow at 2am, I’m still a meerkat on amphetamine – Sergei in Ibiza at Pacha. Lindsey of course, is unaffected. I could rig a drip of Red Bull into her carotid artery and she’d still sleep deeper than a Brian Cox science sentence.

I’ve mentioned it already – but it’s worth restating – that if you’re absolutely adamant you won’t give into sleeping pills, or the melatonin does bugger all, and a slug of whisky mid-week is just too decadent, there are only two options left: boring book or masturbation. I cannot recommend enough the former – a Charles Dickens audiobook is the absolute gold standard of coma inducing. Try Bleak House. 40 hours of indecipherable hell. That soporific yarn read by a professional actor will unplug your brain-stem like Neo fleeing the matrix. The other massive advantage of the audiobook is no light, or blue light. Just set the timer and wait for Dickens, Trollope or best of all Sir Walter Scott to trick your pre-frontal cortex into a delicious coma.

Still, now and again, even books will fail, and all that is left is what I like to call the ‘Gentleman’s Horlicks’ (much better than a tug n’ snooze). I have no idea why, but most of us find a night-time hand-shandy very effective in beckoning Morpheus to the chamber. But even this simple act of self-pleasure presents challenges when you have a partner sleeping next to you. What if they wake? You’ll get caught having an affair with yourself. Luckily for me, and for many of the Tribe B people, I sleep next to a corpse-wife whom a clown with a comedy horn couldn’t wake, let alone the pathetic rhythmic desperation of a worn-out barely horny jester.

But all of these sleep worries in life are nothing compared to the nuclear strike on slumber which comes from sodding babies. A baby is the Kim Jong Un of sleep attacks. It means business. I’ve never known happy couples spiral and decay as quickly as around the issue of baby sleep and bed sharing. If you retain nothing from this article, at least please try and and remember this: BEFORE YOU EVEN CONCEIVE A SATAN (A BABY) HAVE A DISCUSSION ABOUT SLEEP. That’s what Lindsey and I did. Prior to the Marvelon pill packet being thrown in the bin, we made sure we were in harmonic agreement about our approach to night-nights. If you plan to have the kicking, gurgling, smelly thing in the bed with you, fine, brilliant in fact….so long as you BOTH agree. So long as you both embrace the yoga mat, hippy beard wonder of attachment parenting, all will be blissful. No approach to sleep is superior to another; the only type of couple who is actually superior, i.e. operating at a higher level, are those couples who can communicate clearly – and in advance, especially. Too many couples have a blissed out mummy and baby, with baby attached to boob in bed, while depressed Dad mainlines PornHub in the spare room, working up a pop-eye’s forearm and planning how to fake his own death. Whether you plan to encourage the baby to sleep through in its own space, or go full Mother and Daddy Earth – just make sure you know, or sleep will take your love, and shit on it.

There is one last divide which must be acknowledged: the morning Vs the night person. This decides who enjoys being up late, versus those other idiots who are chipper in the morning. Most of us, sadly, have to get up early, but only a strange percentage of us enjoy it, thrive upon waking, hang their hands out of the sunrise window hoping a gay robin lands upon a finger and sings. Well not me. I’m a night person; happily Netflixing on episode autoplay till 2am. I love the cosy feeling of having the house to myself. I adore eating late. My sleep clock is 2am to 10am. 8 solid hours of sleep, just taken later than others. Morning people are hard to endure – some of them, the most repulsively upbeat, even refuse coffee, chirpily declaiming how they feel lively enough without caffeine.

“A herbal tea is enough for me.”

Seriously, piss off. There is an even worse one than that; one which, if heard, I would encourage you to immediately apply for divorce.

“No thank you, boiling water with a slice of lemon in it is enough for me.”

Sleeping, dreaming – to do nothing is sublime, but to wake up and pour a vat of Starbucks onto a vile mood, that, at least, is something.

Sign up to our daily newsletters to get Russell's genius columns direct to your inbox. 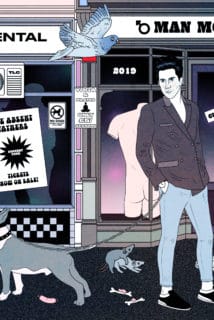