Adventurer and former soldier Aldo Kane tells us about his gripping new BBC documentary in which he looks into the illegal tiger trade in South East Asia.

Aldo Kane, fearless adventurer, former marine and highly entertaining podcast guest, is next going to be on our screens with a new BBC documentary investigating the illegal tiger trade in South East Asia. Tigers: Hunting the Traffickers is a seriously gripping watch as Aldo uses all his Commando training to search tiger farms, secretly film traffickers and discover freezers full of tiger bones and cubs. With under 4000 tigers left in the wild, the film shows how the tiger business in China, Thailand, Laos and Vietnam, where the animals are used to create luxury products with the old associations of sexual potency, is leading to an increase in poaching wild tigers as well as mistreatment of animals in captivity. All of it seemingly done with the collusion of governments who are failing to protect the species adequately.

We caught up with Aldo to find out more….

How did you get started on this project?

I work in adventure TV and keeping people safe in hostile environments – that skillset is from royal marines. We were chatting with the production team about using those skills for a subject that makes a difference. We were talking about this about 2 years ago, we thought we should look at anti-poaching conservation sphere, and to tell the story of an animal. The reason we chose the tigers is because its so time critical. It’s a matter of a handful of years as opposed to tens or twenty of years before they go extinct in the wild. It’s a call to arms that needed to happen. Even now it’s probably later than we would have liked to get the word out but it takes time.

Can you give us an overview the commodification of tigers that you looked into?

The premise of the entire film is not a finger poke at China and Vietnam about tiger farming specifically but that is part of it, but the main thrust is that wild tigers are being persecuted and made extinct because of the growing demand through tiger farms. So in south-east Asia there are several thousand tigers in captivity and they’re bred specifically for luxury products in Vietnam. The tiger will skinned, butchered and the bones boiled down over two or three days into stock cubes effectively. They call it tiger bone glue. That’s then scraped off and put into your liquor of choice whether that’s vodka, whisky or whatever, and then you drink it with friends. In China the market is slightly different and it’s more in the wine business when the tiger carcass is hung in a vat of wine and then matured for three or five years.

Effectively you end up with two products on the market in Vietnam and China, both slightly different, but both of them having a direct influence on the wild tiger population, because for the super elite rich, they want it from wild tigers, not farmed products.

So that’s what the film is about. 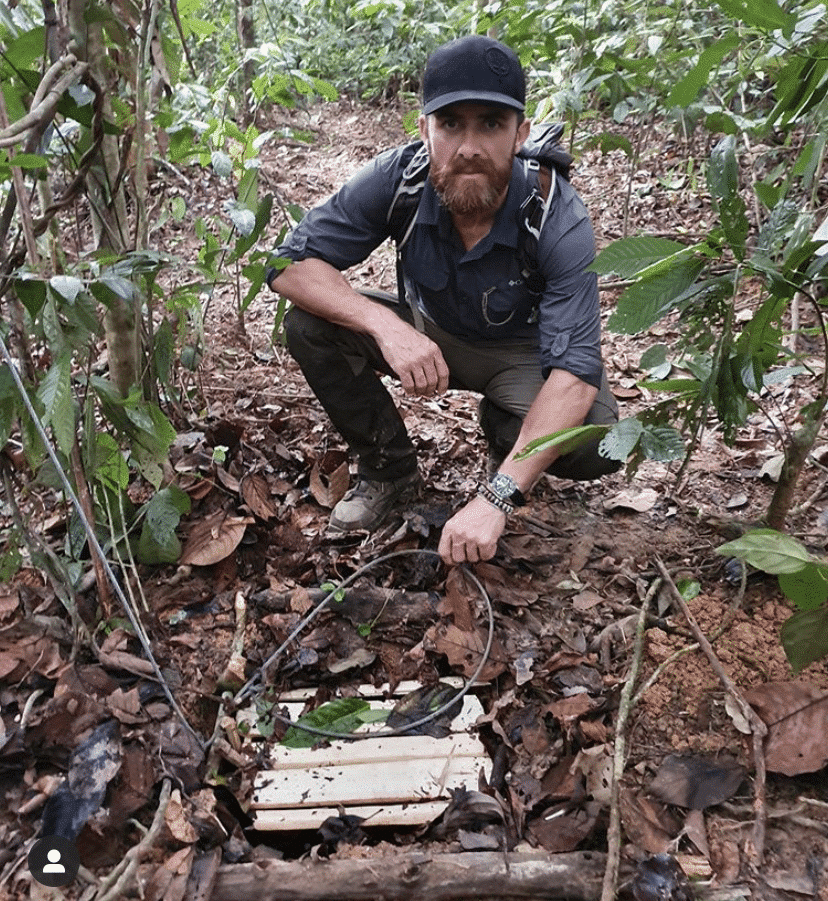 Aldo with a tiger snare used by poachers.

These rich guys want the most real, authentic product?

Exactly and the more free and wild the animal is, the more virile they think they’ll become by consuming it. What we’ve got to remember is, tiger is an apex predator in tiger range countries and when you remove that it’s not just tigers that suffer it’s everything in that eco system that then suffers. We’re in the position now where we know this is happening, we understand it and know what the effect will be if it goes unchecked and yet we’re still in a position where not a lot is happening. The government aren’t stepping up and stepping in.

Because of the rich clients who presumably have influence?

Yeah if you look at the smaller countries like Vietnam, like Thailand, like Laos, they’re very much beholden to what China says and what China does. And at the moment China is in full swing production of tiger bone wine. It has thousands of tigers being bred for that specific purpose. So China really does have the power to stop this and they’ve done it with pandas. And it’s a bit of a success story with pandas, though a lot of them are in captivity, but they still managed to stop the trade in them. So there’s a lot to be done.

How did you go about investigating all this, who helped you on the ground?

The film has me front and centre but that’s to get the story across but I was working with NGOs like the Environmental Investigation Agency, Debbie Banks and her team, and a team of investigators in every country. And they’re wildlife crime investigators, this is their work, and this is a live investigation, and their lives are very much in danger. Ours in certain situations were put in some danger but ultimately is was the team of investigators on the ground at most risk and putting themselves in the firing line to get this information and evidence against the country and against the tiger farmer.

It’s an exciting watch, what were some of the hairiest moments for you?

There’s some really heavy strict rules from the BBC and what you can and can’t do for obvious reasons. You can’t be breaking and entering wherever you please. You can only go and investigate people and property if you have reason to believe, and sufficient evidence to believe, that there is wrongdoing, so it took us a year of working with the EI, working with NGOs and investigators on the ground to build this big intelligence picture of how the trade was working across south-east Asia from the poaching to the farming to trafficking and once we had that picture it place it then allowed us to target specifically organisations or areas that there was illegal activity there. And the places where you see me jumping over walls and having a good look at, we had quite a big body of evidence that there was wrongdoing going on. Finding three dead tiger cubs in a facility within a country where all breeding of tigers is illegal, we proved that we were on the right scent.

What was it like seeing those caged tigers up close?

It was pretty brutal, you have to put a brave face on because you’re there to do a job, you’re there to collect evidence and information but really to go into a facility and see six, eight, twenty tigers – and not just tigers, lions, ligers, leopards, jaguars, all big cats – kept in pens no bigger than someone’s front living room and there’s eight or nine tigers in there. Even just as an animal welfare issue it’s wrong.

But the thing we had to remember was that the trade in farmed tigers is directly influencing and having a catastrophic effect on wild tigers.

And all this for the myth of sexual potency, it seems like the height of frivolity?

Its not really traditional Chinese medicine that’s the main culprit here, it’s luxury products. Like you say it’s the frivolity of scraping a bit of tiger stock cube into your whisky. It really is a luxury product and that’s due to the traffickers pushing these products and pushing new uses for them. Once it was to treat ailments, now it’s used to give you power, sexual power.

With this kind of heavy investigation is it hard to walk away from it once you’ve finished filming?

It is yeah, the investigation and the filming is stage one. We’re hoping for a legacy off the back of this, we want people to be enraged, we want people to rise up and denounce it. Really it needs an international audience who can lobby their governments to make a difference. As much as China has said its banning the use of bushmeat and wildlife products because of the coronavirus, it doesn’t at any point say they’re stopping farming tigers or stopping the use of them in luxury products or medicine.

You’re also about to film a new documentary about northern white rhinos for the BBC, what can you tell us about that?

It’s just been announced and we head out in a couple of hours. Basically it was in the news last year that the northern white rhino, a subspecies of rhino in Africa were extinct and there was only two females left. There was all sorts of IVF being worked on but effectively that subspecies was extinct. And this will have us going into south Sudan where war has raged for the last sixty years. People haven’t been in there, expeditions haven’t been in there, film crews haven’t been in there. The plan is to go in and spend a few weeks and have a good look around to see if there are any northern white rhinos left. The implications of this is to potentially bring a species back from the brink of extinction if we do find a breeding population there then it’s the biggest thing that will have happened in natural history news in years. That’s all we can say at the minute.

Why should people watch the Tigers documentary?

Because anyone who has children at this present time will be growing up without wild tigers. We will be responsible for not standing up and not lobbying hard enough, and wild tigers will become extinct. The only tigers that will we left are tigers in cages and effectively they’re just house cats. So people need to watch it to understand and raise awareness of the situation.

Also as far as film-making goes and getting the story told, it’s a pretty good watch.

Sign up to our daily newsletters for news, interviews and advice for modern men.