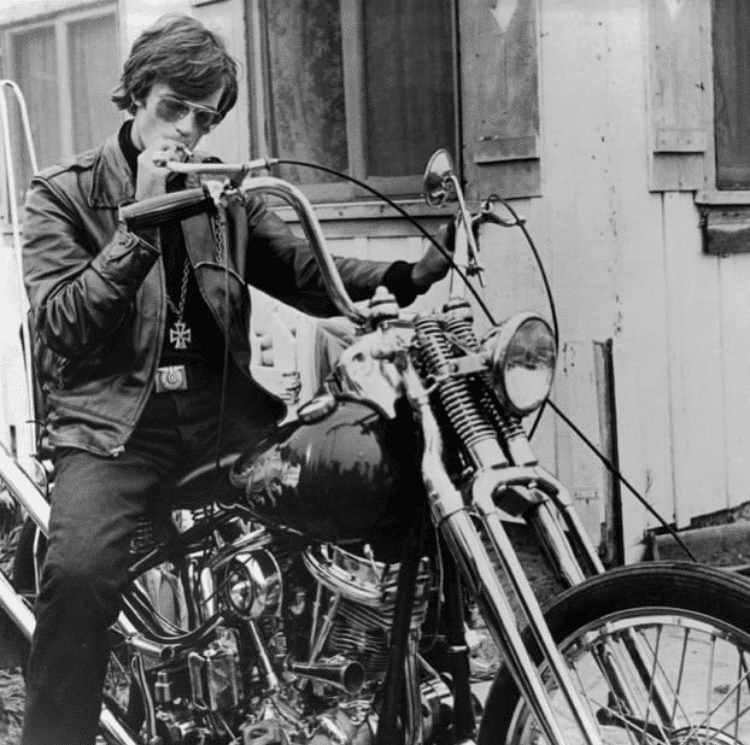 In tribute to the actor and film-maker Peter Fonda, who has died at 79, here's a collection of clips showing a man who changed the world.

Classic counter-culture film form 1967 directed by the king of low-budget b movies, Roger Corman, who later give first starts to Francis Ford Coppola, Scorsese, James Cameron and more.  The Trip was written by Jack Nicholson and featured Fonda as a TV ad director who takes LSD to help him over a divorce from his wife. It is of course very of its time, with inspired/hilarious groovy hallucination scenes and enough sex & drugs to make sure it was a hit in the States and banned in the UK until 2004. Fonda shows he has the natural screen charisma of his legendary father Henry, but with a neurotic, far out edge all his own.

Fonda was described as “the John Wayne of the biker flick”, those low budget exploitation films playing upon the notoriety of the Hell’s Angels in the 60s and of course to cash-in on Brando’s The Wild One. The Wild Angels (1966) was the first Corman/Fonda success, and paved the way for Easy Rider by making $10 million on a budget of $360,000 and giving Fonda and his long haired friends some serious movie-making clout.

These days, the film lives on in Primal Scream’s Loaded which sampled Fonda’s genius speech from the courtroom scene…

3. Coming up with idea for Easy Rider

According to Peter Biskind’s Easy Riders, Raging Bulls, Fonda was at Toronto Film Festival promoting The Trip, and was struck by an idea in his hotel room while he signed promotional photos: “I was a little bit loaded, and I looked at…a photograph from The Wild Angels of me and Bruce Dern on a chop. Suddenly I thought that’s it, that’s the modern Western; two cats just riding across the country…and maybe they make a big score, see, so they have a lot of money. And they’re gonna cross the country and go retire to Florida….When a couple of duck poachers in a truck rip them off ‘cause they don’t like the way they look.”

Fonda immediately called his friend Dennis Hopper back in California about the idea, and then and there they decided they’d both produce, write and star in the film and Hopper would direct. And lo, cinema was changed forever as Easy Rider destroyed the old Hollywood studio system and opened the doors for the 70s movie brats. Except it’s actual making after that phone call was far from easy.

4. The graveyard scene from Easy Rider

Before filming was properly greenlit, the Easy Rider ‘team’ headed down to New Orleans to shoot some footage at mardi gras as a kind of test, some of which made it into the final film as the legendary graveyard scene where Captain America, Billy and their girlfriends take acid and screw and cry on crypts. Legendary because everyone really was on drugs, and Hopper was at his craziest. On the first day of shooting Hopper sat everyone down, told them to stop being creative and screamed at them, “This is MY fucking movie! And nobody’s going to take MY fucking movie away from me!” By the time they filmed the graveyard scene most of the crew had quit, and Fonda never forgave Hopper for making him talk about the death of his real mother on camera as he hugged an angel statue – she had died by suicide and it was an issue Fonda hadn’t come to terms with. Yet the scene stands as a uniquely affecting moment in the film – as with the drug-taking, Fonda wasn’t acting. The blurring of documentary and fiction put the film a cut above anything else in American cinema.  Not that this would have been any consolation to working with Hopper, who prepped for direction by taking speed, weed and booze, and took loaded handguns into production meetings. Throughout the subsequent shoot violence was always on the cards. Fonda said, “I was never afraid of him. I was wearing a belt, the primary chain from the motorcycle, chrome. When you’re belted in the face with that motherfucker, you find that’s a skull crusher.”

One of the best stories about the shoot (and there are a lot) is that when they finished shooting, they had a typically wild wrap party, only for someone to realise the next day that they’d forgotten to film the entire second campfire sequence.

5. She Said, She Said by The Beatles

In 1965 The Beatles were staying at 2850 Benedict Canyon Drive in Beverley Hills as a base for their US tour. They received the Hollywood set at various points including , one night, Peter Fonda. John Lennon had taken LSD with David Crosby and been watching Cat Ballou starring Jane Fonda, when her brother Peter turned up. Fonda told Lennon about a near-fatal gunshot incident when he was 11. Fonda had been cleaning his father’s gun, and shot himself in the chest. He died three times on the operating table (apparently his heart contracted in a beat at the precise moment the bullet entered him, meaning it grazed the underneath of the heart rather than enter it; he survived by that small a margin) and said, “I know what it’s like to be dead,” which enraged Lennon. The Beatle was fearing a bad trip and snapped, “Listen, mate, shut up about that stuff, you’re making me feel like I’ve never been born.”

Fonda regularly popped up in films playing homage to his Easy Rider days, in the likes of Cannonball Run and Wild Hogs. Our current favourite is his appearance in the otherwise dreadful Ghost Rider, as the devil himself. “You run a show?” he’s asked by the Ghost Rider kid who’s polishing his hog.. “Greatest Show on Earth,” Fonda replies. Ok, it’s bad, but it’s Peter Fonda, so it’s good.

A late period high point, with Fonda appearing as the bad guy opposite Terence Stamp in Steven Soderbergh’s 1999 neo-noir. With a meaty role to get his teeth into, Fonda excels as LA crime lord Terry Valentine. Pleasingly both Stamp and Fonda frequently play upon the idea of the 60s as their glory years for their characters and themselves, particularly in this scene where Fonda muses on the decade to his young girlfriend…

If there’s a Fonda film you want to check out that isn’t Easy Rider, then go for 1974’s Dirty Mary, Crazy Larry. It’s a breathless chase movie not a million miles from Rider, in which Fonda plays Larry, a NASCAR driver who, along with his mechanic Deke, extort money from a supermarket manager then hit the road, taking Larry’s one night stand Mary, played by Susan George, with them. Notable for its amazing 70s muscle cars, a Chevrolet Impala and a Dodge Charger, and the chase scenes which smashed them up (legend has it that the low budget production could only afford 3 cars so mechanics had to patch them up every night after filming), and, thanks to Fonda, a raggedy cool. One of those cult classic best watched at midnight while loaded. In tribute to Fonda, who really did change the world with Easy Rider alone, maybe tonight should be the night.

Sign up to our daily newsletters for the best from the frontline of modern masculinity.