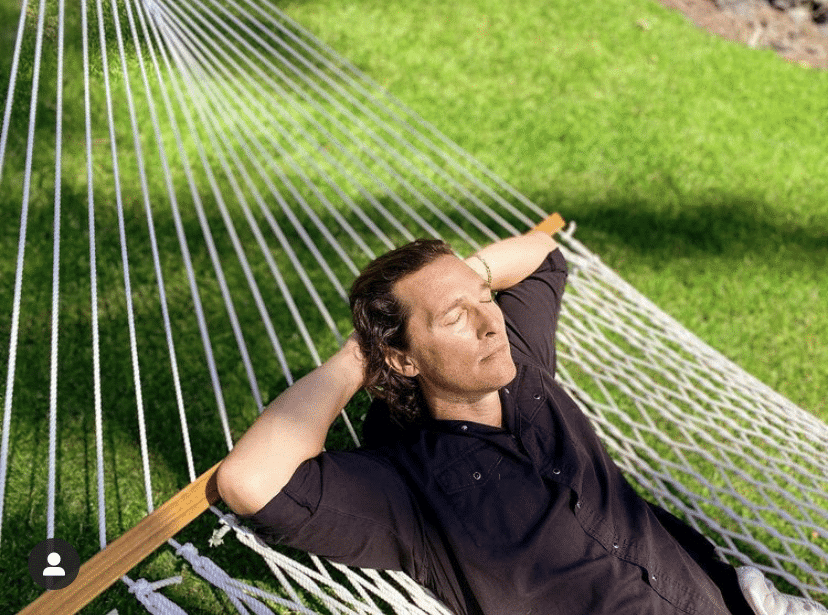 The genius of Matthew McConaughey

On the promo trail for his memoir/guide to life, Matthew McConaughey is proving himself to be the guru we all need right now.

Matthew McConaughey is a genius: I mean, we knew he was a great man, one of the best, most loveable actors of his generation, and the type of man you’d love to go for a drink, and a naked bongo session, with…but we didn’t realise he was a genius. Genius in this case meaning: a seriously eccentric inspiration.

Now it is very much apparent. Firstly, in an interview with Empire about his new book, Greenlights, he revealed his self-care techniques are off-the-chart. He told them he is an ‘Extremely talented fingernail clipper,” and that, “I’ll get a headlamp on, glasses. Sit down with a cocktail and have a nice 45-minute session. It’s very relaxing to me for some reason.”

Now, wait a second – 45 minutes to clip your fingernails? Nearly 5 minutes per nail? This is absolutely mind-blowing. Manicures may well be increasingly popular among men, but such an extreme manifestation, such detail, is quite something. If you’re going to do this self-care malarkey, then really go for it. Don’t just light a few joss sticks and shave off your pubic hair; really take your time over things. An hour spent on nostril hair clipping. 65 minutes brushing your teeth. All day baths. Well, given the amount of time we’re all spending at home now, why not?

But its not just his epic self-attention, it’s basically everything he does. Take writing the aforementioned memoir-cum-self help book, which is about turning “roadblocks into greenlights”. He wrote it during a 52-day exile in the West Texas desert with 36 years worth of journals, emerging with less of an autobiography and more of a guide to life, or a stimulus to a better life, filled with lessons which you can practically hear his Texan drawl as you read: “Truth’s like a jalapeno. The close to the root, the hotter it gets.”

We could read that stuff all day. Luckily, with him on the promo trail, the one-liners and the stories just keep on coming…

We love the way he deliberately puts himself into extreme situations or behaviours to change or shape his mindset. While preparing for dragon slaying film ‘Reign of Fire’ he spent two months on his brothers ranch doing a “dragon slayer mind, body, spirit daily workout regime.” This involved a shot of tequila first thing every morning – for dragon breath – running 5 miles in the desert barefoot – as dragons don’t wear shoes – and then wrestling cows at night – not sure if dragons do that, but who’s going to argue with the guy? This experience eventually ended with him getting concussion when a bull headbutted him. You can’t imagine Hugh Grant doing this shit can you?

He’ll also just take off on a whim, to go hitchhiking on his own if the mood takes him – or if a wet dream tells him to…

You won't believe how Matthew McConaughey chooses his holidays…

Watch The Russell Howard Hour tonight at 10pm on Sky One for the full interview with @McConaughey pic.twitter.com/QIQoVvhELU

The best thing is that all of this comes from a heartfelt place that is borne out of toughness. It’s not hippy dippy stoner nonsense, well not always. The wisdom comes from experience.

In an episode of the ‘Talk Easy’ podcast, he talked about the origins of his catchphrase, “Just Keep Livin”, which he famously improvised in his breakthrough film, Richard Linklater’s Dazed and Confused. It’s something of a studenty t-shirt slogan these days but actually came from a phrase which consoled him after his father died during filming. He said he realised as he was driving back from his dads’ funeral that his body may have died but his spirit could live on with him – and he vowed to carry that spirit with the phrase in mind – which subsequently made it in the film:

He says on the podcast: “The death of a father sobers you up as an individual…be less impressed, more involved. I was revering things because of my reverence for my father. Instead I the things I was revering, I lowered down, and the things I was condescending came up – I started seeing further, seeing wider, and standing ip straighter, without even knowing. My heart was higher and my head was higher. I was like: you can’t be the boy anymore, your Dad’s not here, it’s time for you to be a man. And those were the lessons I took from that time.”

Recounting the last words Paul Newman said to him –  “give em hell” – he went on to say how much that linked to his dad’s life lessons, and the message he is now passing down to his kids, and indeed everyone now: “Don’t half-ass it, give em hell…Life’s a rodeo, man, it bucks, so ride the damn bull, give ’em hell, don’t half-ass it, it’s not all easy street.”

Amen to that. Amen indeed to our god, our genius, our Texan maniac, Matthew McConaughey. Where you go, we follow…