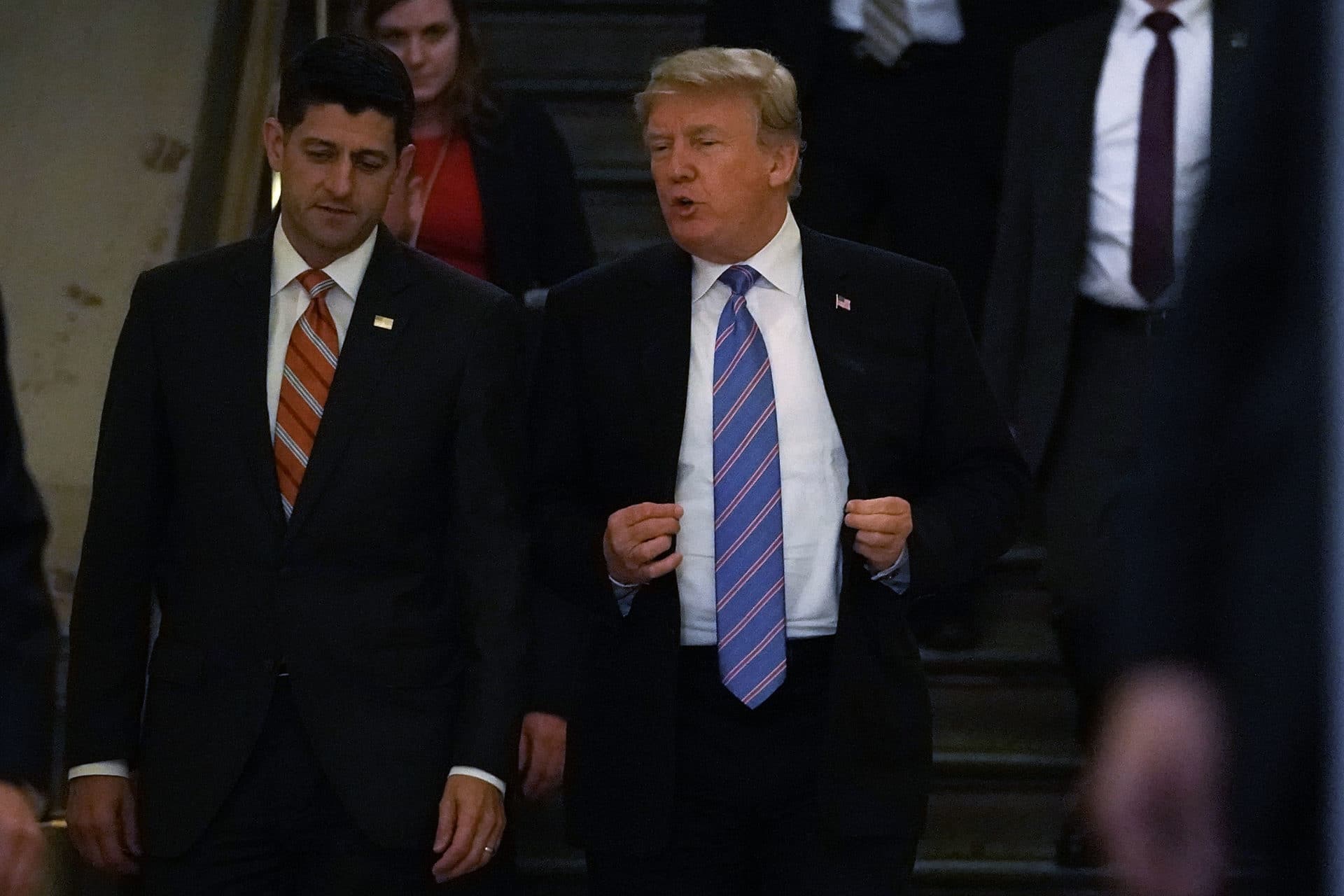 Phallus Of The United States

Donald Trump is a great man, and a few caged children aren't going to change that. But what's his secret? Well, it's his ties of course. Donald Trump's ties are the window to his soul. What a guy! 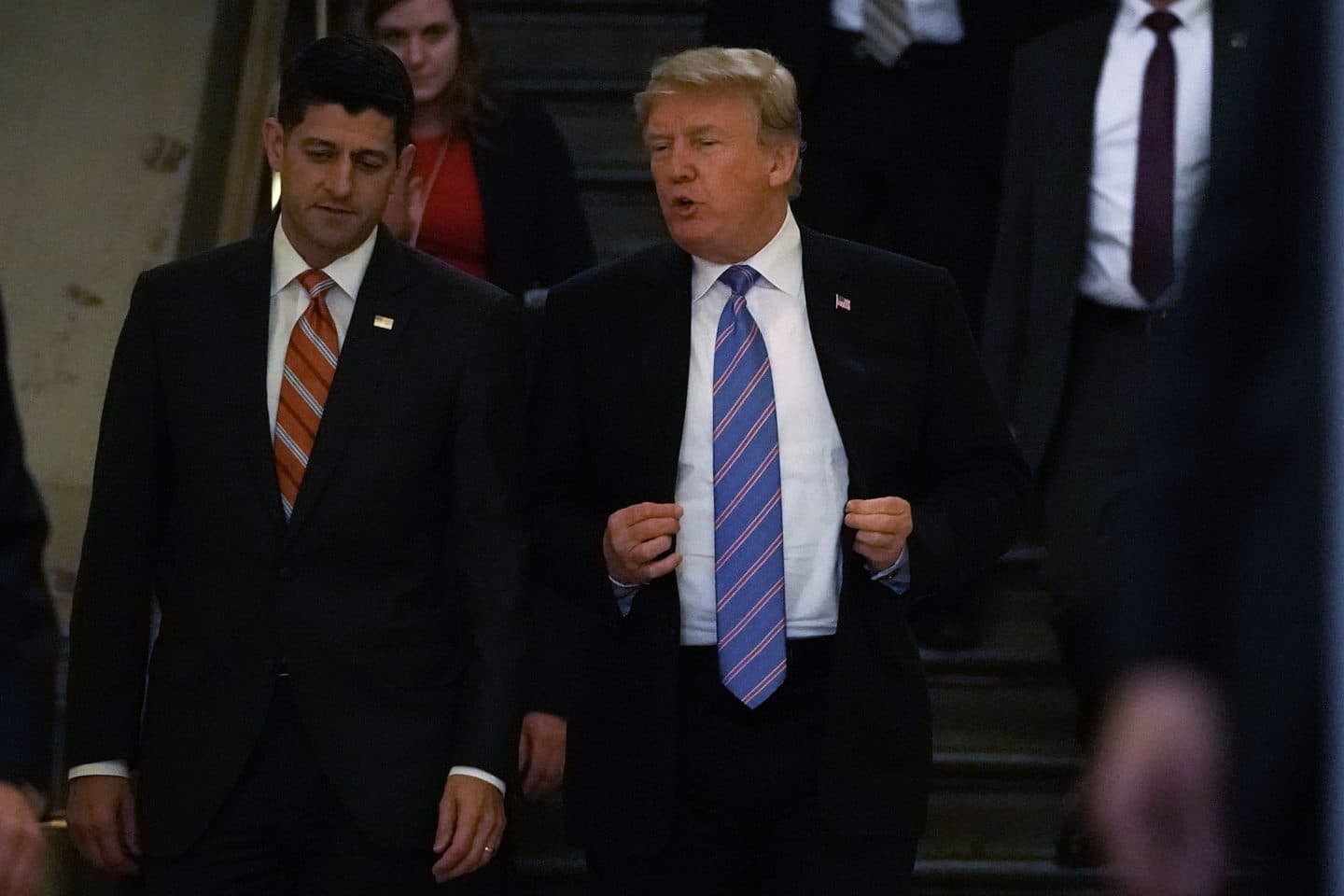 The tie Donald chose to wear to talk about his detainment of immigrant children in cages, was of course, masterful. Despite what the FAKE NEWS is saying, none of this ripping away of children from their parents and locking them in cages, was Donald’s fault. It was the fault of the parents who tried to illegally bring their families into the greatest country on earth, the U S of motherfrickin’ fucking A. Those immigrants practically asked for this treatment of their children the minute they broke Uncle Sam’s new zero tolerance laws. Besides, the cages the kids were in were pretty nice, with cosy foil blankets, and the warmth from the other children all crammed in there, particularly because they were all crying from the trauma, which generated further body heat. Maybe those kids needed to toughen up anyway, and be as tough as Donald, who had a hard knock life himself having been educated in one of the roughest private boarding schools in New York state.

But the tie he wore when dealing with all these questions about those whiney kids…well, it said everything. It had the usual Donald length, dipping well below the belt line, and the usual Donald girth, getting fatter the further it goes down – I mean, only by having Stormy Daniels trying to milk it’s flaccidity for six hours could it be any more like his cock. But on this day, the colour of the tie was a royal blue with a playful scarlet and gold stripe. It was jaunty yet authoritarian, as if to say, “Yeah the state-sanctioning of caging children is happening, and so what? What do you expect me to do about it, I’m just the President…”

I mean, you take one look at his tie and you know this is a well endowed man who is too busy running the world, FYI, to be bothered about some little crying children in a cage somewhere. Like, he’s got some golf to play, you know? Stop jabbering on at the Great Man. 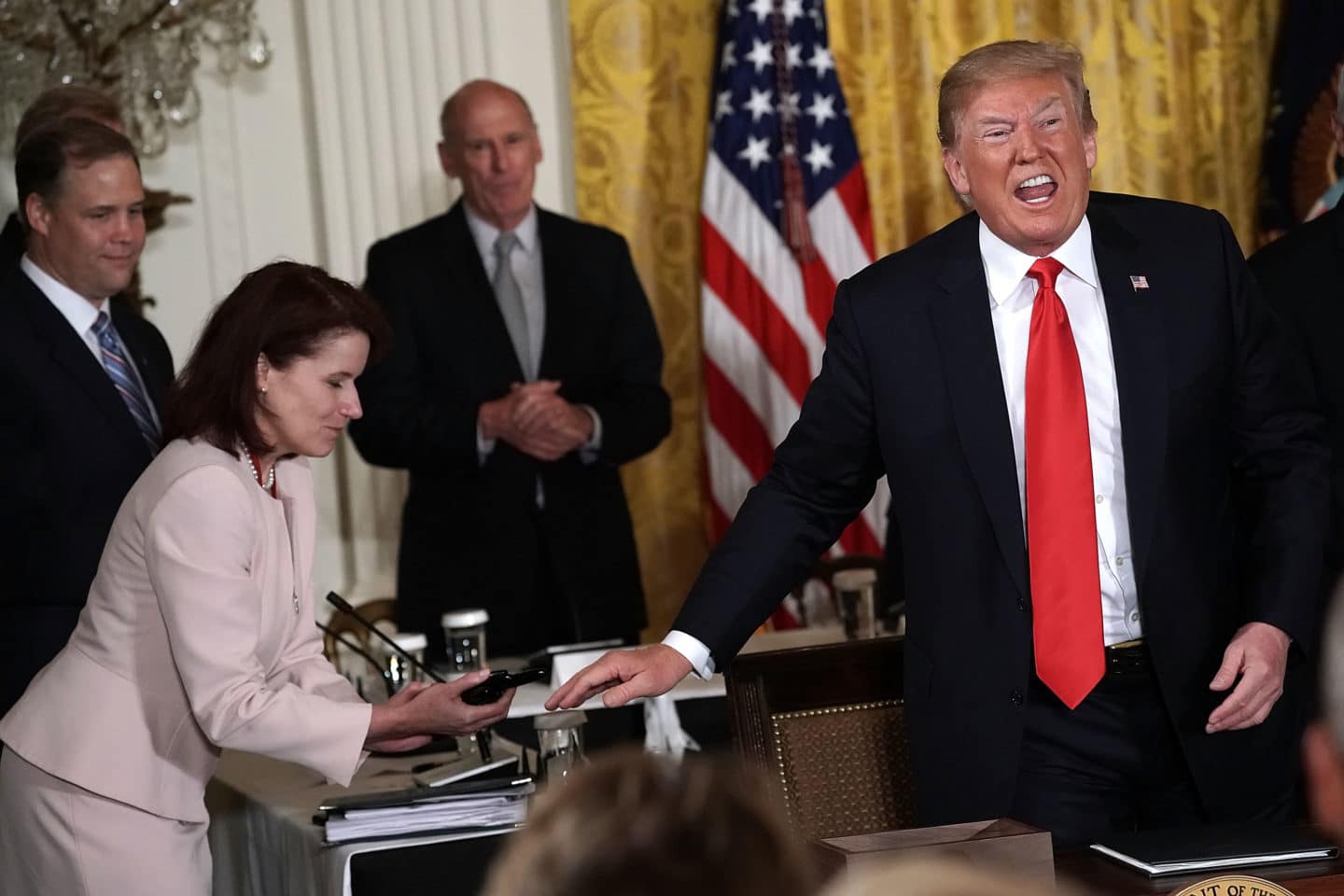 This is the classic Donald tie we all know and love from the massively attended Inauguration. It’s red, it’s massive, it’s dangling…yep it’s another huge donger hanging off his throat. The message is clear: “Listen, all you people from NASA, you may know some shit about rocket science and particle physics but in here, that means nothing. I am the boss, I am the big man, and I lead with my cock. Look at it. Look at it!” He’s so amazingly clever and subtle. His cock is big and red and it is leading the country, not some dumb-ass brain. A cock is the President of the United States. A massive synthetic cock. 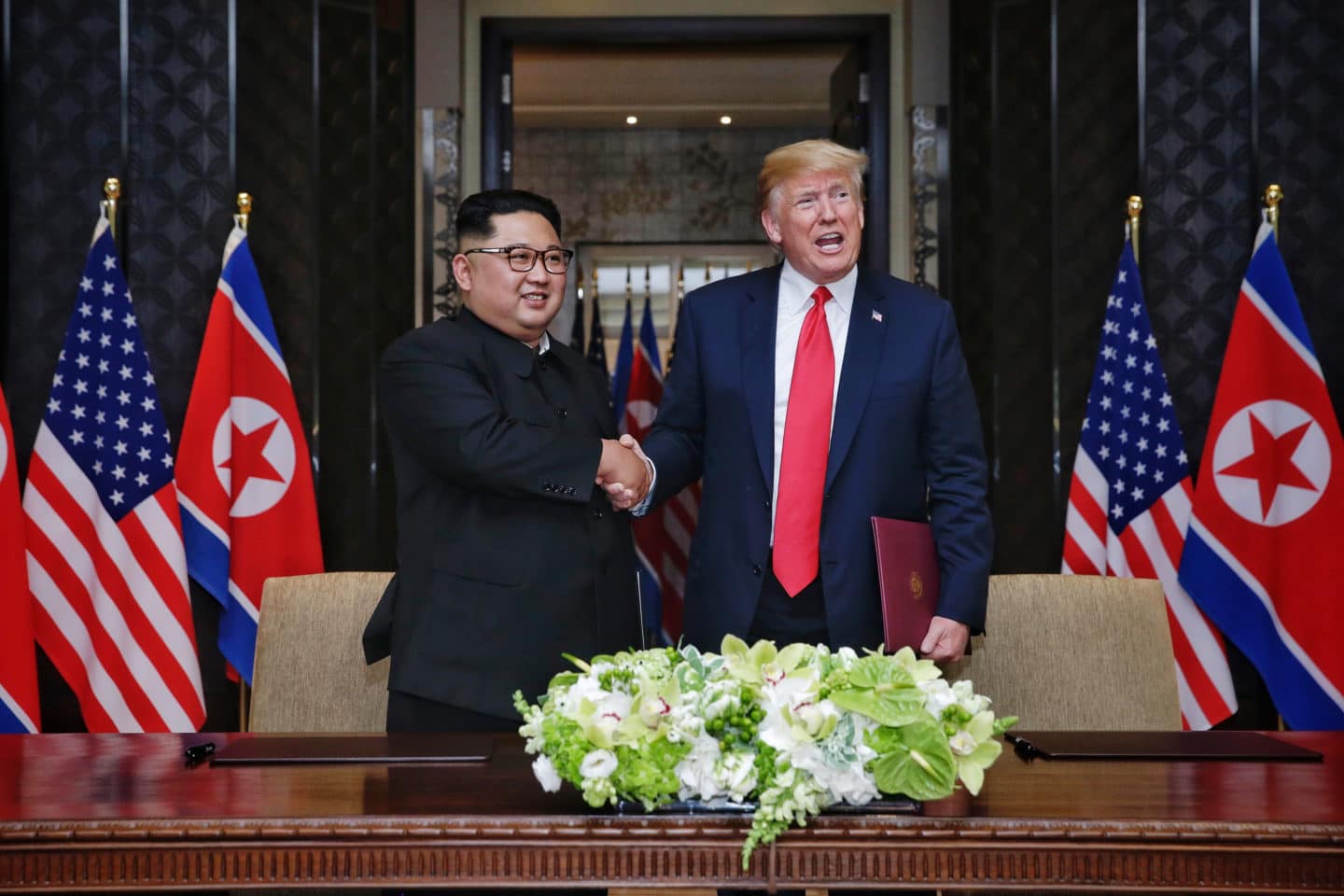 Donald was meeting the most evil man on the planet in Korea, so of course he was going to bring out the big guns, his big red cock. Look at Kim Jong-Un, all buttoned up in black like a commie Democrat SOB – he isn’t wearing a tie at all. He probably can’t even afford one, since he’s not a billionaire like Donald probably is.

Also note the way Donald never does up his suit coat. Why not? Well, it’s not because Donald is fat, if that’s what you’re thinking. Donald actually invented the six pack in Trump Tower in 1983 and still has one despite eating two cheeseburgers in bed every night. The reason he doesn’t do up his coat is because he want to let that red cock swing about in everyone’s faces – let it brush up against their hands, let it dip into their drinks, let it get caught in their damn foreign-ass mouths, let the fuckers choke on the Don-g. 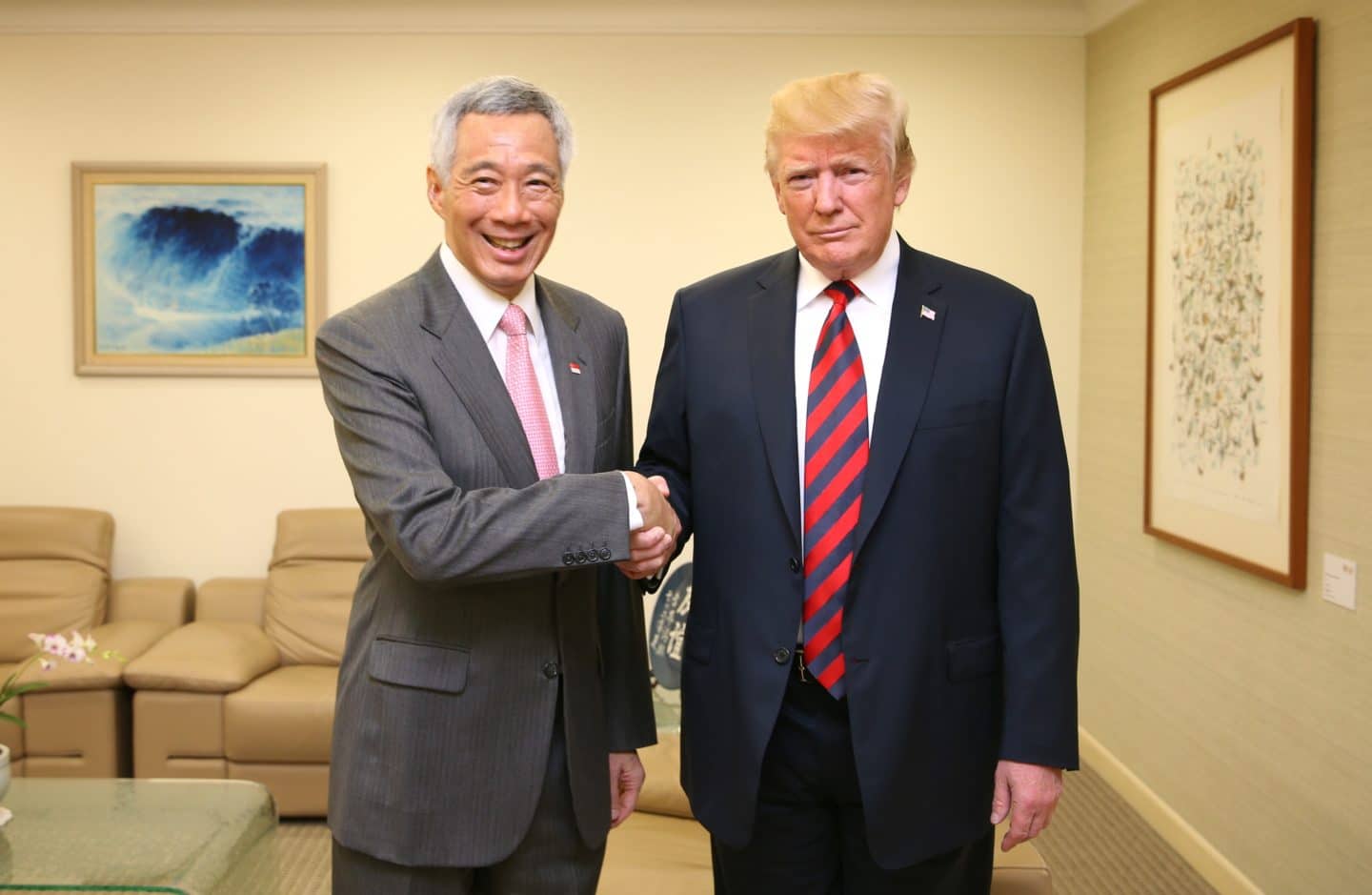 This is the snub tie, the “I’m not bothered about meeting you” tie. The other guy is the Singapore Prime Minister who was hosting the Kim John Un meeting, but you can see Donald doesn’t care. For a start he’s not wasted the red tie on him. The red tie is for big boy shit, not meeting some smiley-ass guy who has no nuclear weapons. I mean, it’s still a great tie, the navy and red stripe, but it’s the kind of tie that says, “I don’t even have to make the effort for everyone to know I’m the bad boy in charge of the world now.”

Tie worn during the G7 summit in Quebec 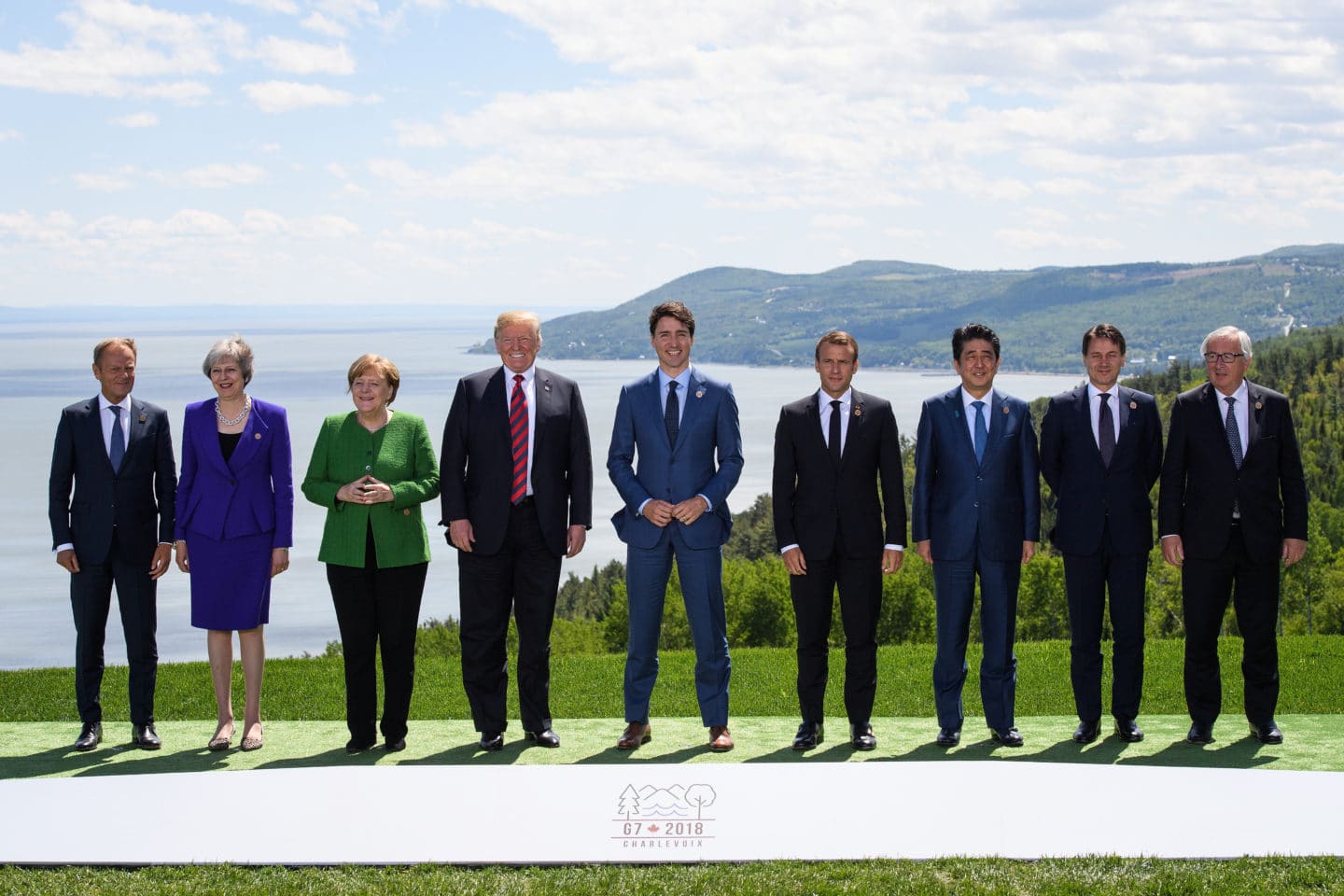 I mean, who won this summit? (And yes, it is there to be won, and if you don’t think it is, then you must be Canadian) Donald won the G7 summit that’s who, and not by his obvious statesmanlike poise or knowledge of all matters on the planet, but simply by having the biggest and best tie. Look at him here, letting his jacket swing open to reveal his stripey cock of choice. The rest of the men are laughable, all buttoned up like the prissy little pricks they all are. And look at the women – they can’t even wear ties. How can they ever expect to lead the world stage? No chance. But at the near-centre of it all is Donald, drawing the eye, a sight for the ages, and even if he is rejecting the UN Human Rights Council, and taking toddlers from their parents and putting them in cages, and dismantling the values of decency and respect that America once had, none of it really matters. What matters is he’s the Alpha of the World, and it’s all thanks to his big tie cocks.

Think Trump’s ties are not even his best attribute? Us too. Check out our story on the Trump Pump.

We're pretty sure Donald Trump loves us, so do what Donald probably has done, and sign up to our daily newsletters for more news, entertainment and Trump voodoo-ing.