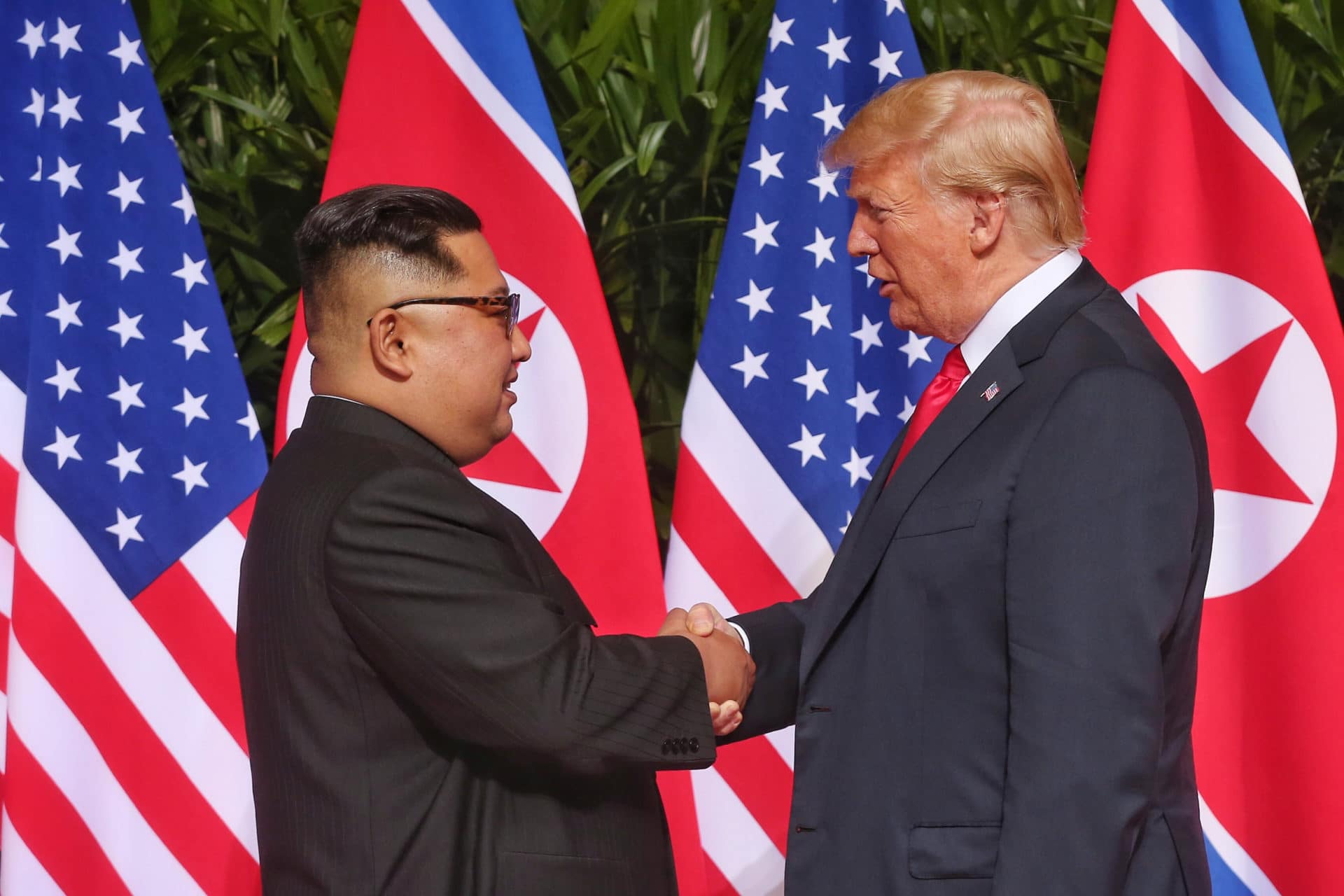 Could you handle the Trump Pump?

Donald Trump is not just the greatest leader ever, he's also the greatest hand shaker ever. Here is an analysis of his finest Presidential handshakes.

Yo, yo, guess what The Donald, The Don, the saviour of rootin’ tootin’ America did? He gypped the goddamn Speaker of the House before his Union address. You know what what kind of handshake Pelosi got? Not the Trump Pump, no sirree…she got no handshake at all!!!

That’s right, oh yeah, my golly god, my sweet baby Jesus – check it, POTUS goes into Congress, and everyone’s goin’ nuts and shit, everyone’s saying oh thanks man, thanks for turning around this country after that Muslin was in charge and ran it into the ground. Thanks for Making American Great Again!! And anyways, he’s swaggering around, John Wayne style, good ol’ boy, and he hits the podium, where the Veep and Pelosi are stood, and this chick sticks out a hand real quick for him to shake…

Well, that pretty little hand (not) just hangs there like a dead coyote’s tail, The Donald takes a glance then spins around in refusal. Oh man! Poor Pelosi – NOT!

That’ll learn her, that’ll learn her real good not to impeach the greatest men to ever hold that office. YEH YEH, DON’T MESS WITH THE BEST YOU CAN BE THE SPEAKER BUT YOU’LL NEVER BE THE HAND SHAKER!!!! WoooooooooooH!

Did Donald finally meet his match? Was the Trump Pump trumped?

Oh, say it ain’t so, but when some guy, Rebel Wilson or whoever, from Portugal came to the White House he pulled Donald from the doorway, yanked him right from the stoop. Like he’d been studying the Pump and hijacked it! The goddamn cheat. Donald is the inventor of the pull and yank, just like he invented the skyscraper and jokes, you can’t just steal it for yourself.

But for sure, Donald would have got him back away from the cameras. Grabbed Rebel Wilson in an old wrestling move and slammed him – BAM – to the floor, while his security guards formed a circle around the two grunting men, and Donald got that Portuguese ear between his teeth and bit down like a coyote on a jackrabbit till the guy hollered mercy. Yeah, that’s what would have happened. Go Donald!

Verdict: Donald wins, but we just didn’t get to see it, alright.

The two men approach each other from opposite sides of the podium. Donald is the first to raise his hand when the two men are still approximately 1.5m away from each other. This obviously puts Donald as the instigator here. But it’s a clever feint. Because at the last second, as Kim aims to land his hand there with a solid looking arm, Trump relaxes his hand a little, just a little, but enough to suggest, “Oh you need me more than I need you.”

Once Kim’s hand is in his though, Donald cleverly takes control again by using his other hand to firmly squeeze the tricep of Kim. Boy oh boy, Donald is the master again – he may as well have the fucker in a headlock!

But things aren’t done there, far from it. Fascinatingly, what follows is less a handshake, more a handjiggle. Kim and Donald hold hands while gazing into each other’s eyes and just jiggle gently together. One can only presume their penises are jiggling away too; hard to make out whether there’s any tumescence, but if there is, it’s probably Donald leading the way again, and with a bigger penis too. Anyway, as they jiggle Donald gives him a little of the famous Trump Pump, where he yanks on the other’s hand much like he would on a toilet chain after he’s just crapped out his two cheeseburger bedtime snack before he goes off to win at sleep.

Abruptly, they both drop their hands away, Kim a little more eagerly it seems. Maybe he was thinking about all the cheeseburgers Donald’s fingers pinch on a daily basis. Or maybe he’s just a wuss, right? You’re damn right.

So Emmanuel is this French guy, and you know what they’re like, right? So anyway, Donald is talking some real words of wisdom, as per- and suddenly this little monsieur sticks out on open palm, somewhere around Donald’s groin. Woah, careful of the tiger down there, Mani.

Donald spots it, and without missing a beat, plunges his hand down into that palm like a coyote onto a tray of racoon entrails. But then Emmanuel tries out the Trump Pump. WTF? Don’t mess with the best. Donald keeps a firm arm, gripping tighter and even when Emmanuel pulls a dick move and pats Donald’s handshake hand, with his other hand, it’s really lame, and Donald holds on with some hardy, clenched bicep whole friggin’ armshake, to win the day.

Verdict: Donald wins, despite all that untrustworthy French malarkey.

So this is it – the meeting of not just the most powerful men in the planet, but the most powerful men in all of history. These Gods – effectively Zeus and Apollo in sensible suits – go in for the handshake in a surprisingly tender manner, and start the shake gently, affectionately. But then guess what Donald does, right? He uses his other hand to jiggle the underside of Vladimir’s outstretched arm. It’s like a tickle. He tickles the most evil man in the universe! Donald is such a little scamp sometimes. Honestly. Wonder if it’ll result in all our deaths? Probs!

Verdict: Donald is the King of the world and totally hilarious, like some amazing Frat leader.

This was the first time these two met – Emmanuel had only just started his job as President, and boy, was he about to get a baptism of fire, Donald-style. Donald is the President, by the way, nobody else, they should give those other world leaders different terms, like Chief Janitor of France or whatever.

Anyway, so they’re sat next to each other and get the handshake going and the little guy has no idea the Trump Pump’s coming for him, so he’s got this smile on his little French face but then as the minutes pass and Donald’s still pumping away at him, it falters, the prick starts to look afraid. How long’s it going to go on for? As Stormy Daniels would no doubt say – even though nothing happened – Donald could go all night. Emmanuel rallies for the cameras and starts clinging on hard with no intention of letting go either now. Years pass. But guess who drops out first? It ain’t Donald that’s for frickin’ fuckin’ sure.

This is a greeting at the door to the White House. Now Justin had clearly been prepped for the Trump Pump, typical sneaky Canadians, so he takes Donald’s hand but then grabs Donald by the shoulder with his other hand, trying to ward off the power of the Pump. He has to use two hands to Donald’s one! It is hilarious. Donald is so strong, and this guy, because he’s Canadian, and basically French, is not strong at all.

Verdict: Donald wins despite what amounted to an ambush.

I mean, this is the classic. Poor Shinzo has no idea what’s going on as Donald makes his mark on the world stage with 19 seconds of pure Trump Pump.

It starts with Trump holding out his hand, then moving to the edge of his seat to get his body prepped for what is to follow. Which is a Pump-action shotgun, motherfrickin’ fucker. Donald just clenches Shinzo’s hand as hard as he can and shakes and shakes and shakes, occasionally adding in a tap of reassurance with his other hand, just to say, “Shinzo, it’s ok – I’m not going to kill you, you just have to understand I am the Johnny Big Bollocks round here, not you.” Because Donald is nice, you can’t ever forget that.

About ten seconds in, Shinzo starts grinning nervously, wondering What The Fuck Am I Doing In This Powerful Place They Call America, With This Impressive Leader? But Donald is in no mood for laugh, and gives him a couple of tugs to snap him to attention, just like he does with Mr Dinky in the bath, lolling there unsuspectingly.

Eventually Donald lets him go and Shinzo leans back exhausted, pulling some silly faces for the cameras. Dude, you can mug all you like – Donald gave you a lesson you ain’t gonna forget in a hurry. And what is that lesson? It is – well, I mean, it’s quite simply that: you mess with the best and the best is gonna mess you. Mess you up, that is. Not, like, smear you with his own faeces. Although if Donald did do that, you can bet his faeces would be the most delicious on the planet.

Here’s a story Donald would really hate: why Brexit is macho bullshit.

Sign up to our daily newsletters for the best of The Book of Man.