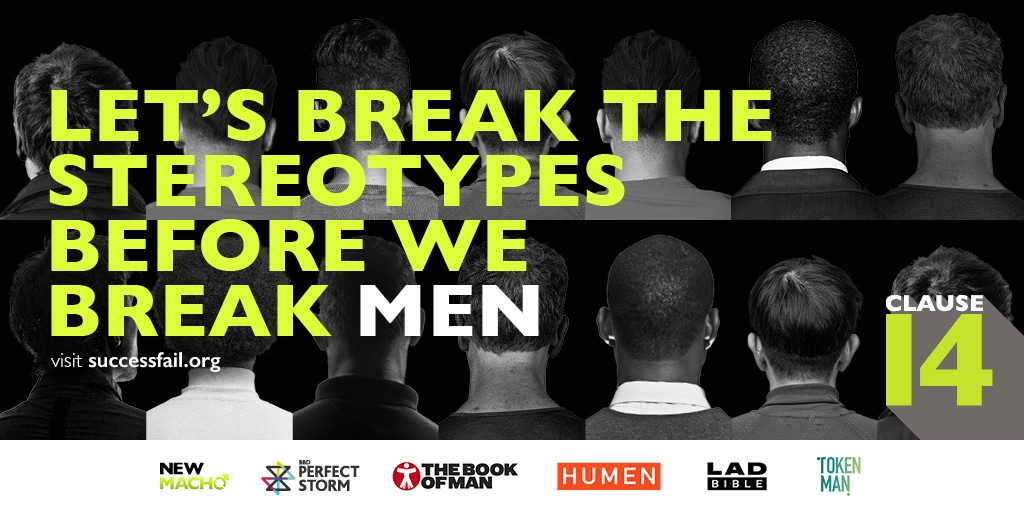 On International Men's Day, The Book of Man have joined a new campaign aimed at implementing a new guideline into advertising standards for the good of men's well-being.

You are cool. Ice cold. You stand on a mountain top being ice cold. Somewhere there is a car, or a watch, or a bottle of perfume shaped like a hand grenade. But none of that really matters, because you are ice cold, impervious to anything. Once you met a woman on your mountain top but she may as well have been a mountain too; just a thing, there to be conquered. You are a man in an advert. And we are sick of you.

We are sick of that guy, you know? And that’s why we at The Book of Man are joining forces with some of the other top men’s names in publishing to get behind a new campaign which wants the ad industry to acknowledge the degrading of emotionality in the depictions of men – and do something about it.

The campaign is led by New Macho, a leading media agency authority which is challenging brands to think about men in a new way. It’s managing director Fernando Desouches, writing in The Drum, said, “We’re all part of the problem, every one of us. Hand on heart, who among us in advertising can stand up and say we’ve not been guilty of easy male stereotyping, portraying men as either invincible and stoic or foolish and hapless?”

On the particular issue they have decided to address in their campaign, Fernando said, “Aspirational depictions  of success in men’s advertising are built on damaging stereotypes of traditional masculinity: distant, emotionless and sexually dominant over women. It’s a harmful typecast hiding in plain sight.”

Why does this matter?

Well we know through charities like CALM that part of the reason why 75% of all suicides are men, is that men find it much harder to reach out for emotional support with friends, colleagues and family until they are at crisis point. While there are various intersections which affect the circumstances leading to an individual’s problems, and a need to provide mental health support from education in schools to a shift in addiction treatment, such things have to be complemented by a rethink on how we socially think about men and culturally in the way we represent this.

Advertising has to play a part in taking on this responsibility – it’s kinda powerful, as you may have noticed. Now it is certainly more powerful than perhaps in the ‘glory days’ of glossy mag coverage and ultra-smooth billboard campaigns, since your phone can identify any dwelling on a brand’s ad and target you with it again and again like synapse-seeking missiles. Brands hit you with constant ‘content’ and it’s messages truly get under your skin. Which is why the messages need to have a layer of thought behind them, beyond ‘Sell, sell, sell’ and ‘Let’s get [insert Avenger here] to take his shirt off’.

How can this happen?

Well, there is a way to implement a new rule to make brands stop using the ultimate aspiration for men is to be impervious, cold, unemotional.

In December 2018, the Advertising Standards Authority introduced legislation banning negative or harmful gender stereotypes in advertising in the UK. They provided 13 examples for what constitutes a negative stereotype, including scenarios which featured pressure to conform to an idealised gender-stereotypical body type, and scenarios belittling people who don’t conform to a gender stereotype.

What New Macho is proposing is that ‘The Hidden Stereotype’ is also included in this as ‘Clause 14’: scenarios promoting emotionally unhealthy behaviour as an aspirational ideal. Which would include any ad ‘that implies to be successful a man must be emotionally impervious, distant and cold, isolated, or dominant over women.’

The Book of Man, along with LadBible, Humen and Token Man, are supporting this attempt to change the old school thinking around men.

You can support this by visiting the campaign hub at successfail.org

Here is a video which explains more:

For the latest on the campaign and the best of BOM, sign up to our daily newsletters.