Simon Gunning, CEO of the Campaign Against Living Miserably (CALM), talks us through what is an important date in the charity’s diary.

16 people take their own lives every day in the UK, leaving behind thousands of friends, family members and colleagues. Let that sink in.

That’s a harrowing statistic and one that the Campaign Against Living Miserably (CALM) strives to change every single day. We are leading a movement against suicide and, in October, we invite you to join us for something really special.

In line with the Autumn Daylight Saving Time, aka the moment when the clocks change and confuse us all for a short while, CALM will host its first ever fundraising event: the Lost Hours Walk. 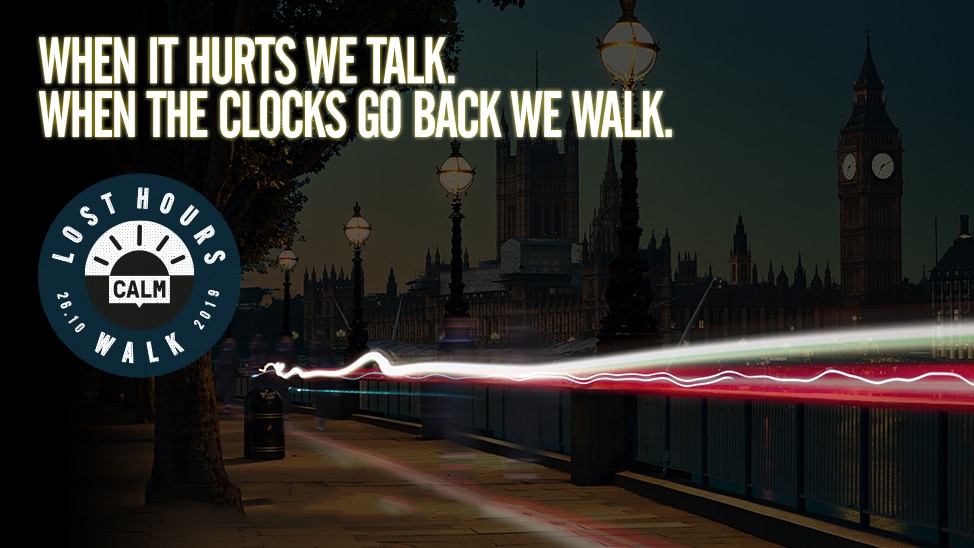 Hundreds of CALM supporters will gather in Greenwich – the birthplace of time – at 11pm on Saturday October 26th and we’ll walk together in defiance against suicide through the streets of Central London. As the clocks change and time goes backwards, we’ll march forwards and use the extra time gained to remember those for whom there wasn’t enough.

We’re going to unite and walk against struggling in silence, against being alone, against living miserably. We’ll walk against the single biggest killer of men under 45 in the UK: suicide.

With an average of 135 people directly affected by every suicide, the Lost Hours Walk is an opportunity to deal with grief differently and defiantly. It brilliantly sums up what CALM is all about in getting people together to celebrate life, to remember those we’ve lost, and to move forward together towards a more open and supportive society.

We aim to smash the silence around loss, and to provide a platform to remember our sons, daughters, brothers, sisters, mothers, fathers and friends out on the streets of London. The fact that we’ve reached a stage in which we are able to host our first ever CALM event, and on the iconic streets of Central London no less, shows how far we’ve come on this journey.

More people than ever before are accessing our free and anonymous helpline and webchat, which directly prevented 675 suicides in 2018, and it’s through the commitment and dedication of our supporters that we’re able to continue supporting anyone who is going through a tough time.

We urge you to join our movement against suicide and to sign up for the Lost Hours Walk.

16 people take their own life every day, leaving behind thousands of friends, family and colleagues. On the one day we are given extra time, we walk for all those for whom there wasn’t enough. Join us in London this October and walk against suicide.

Sign up to our daily newsletters for more on men, mental health and better living.