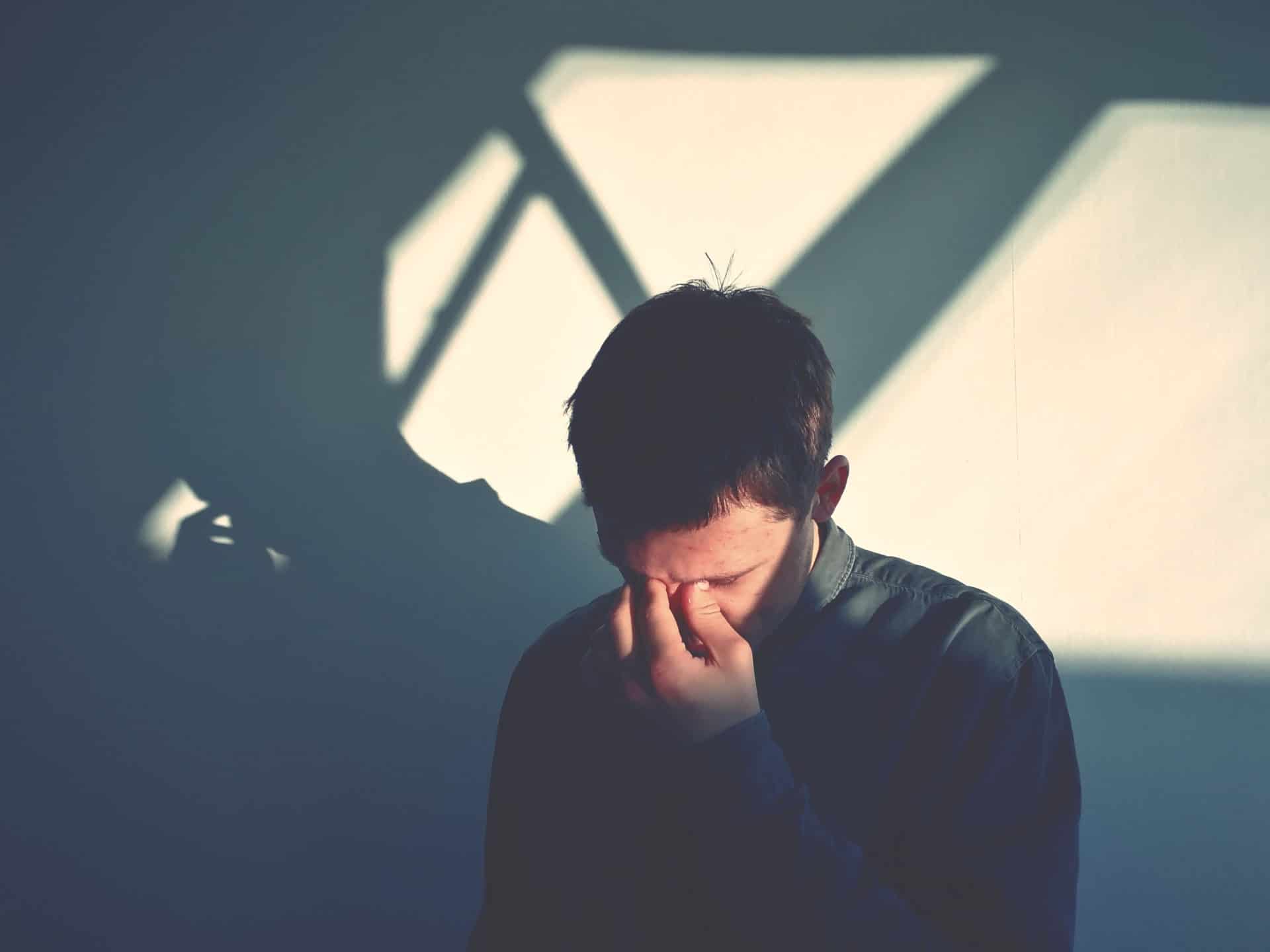 "Boys need to be taught it's OK to cry."

Suicide Prevention Activist On What Needs To Change

Matthew Smith, founder of suicide prevention charity, If U Care, Share, talks Project 84 and how we can do more to help put an end to the staggering number of young men who take their own lives in the UK...

Suicide is the biggest killer of men under the age of 45 in the UK. And while the recent momentum in raising awareness has helped shed light on the shocking statistics, it simply isn’t enough says Matthew Smith – a man who knows the heartbreaking effects of losing a loved one to suicide all to well.

At the tender age of 10, Matthew lost his 19-year-old brother Dan, after he took his own life leaving his family with an incomparable amount of  pain, shock and confusion. However, those emotions quickly inspired them to take action, and they’ve been supporting others in similar situations with their suicide prevention charity, If U Care, Share, ever since.

Launched in 2005, the charity has grown from a local wristband sale, to an effective organisation with 13 members of staff. “We have three main aims,” says Matthew. “Preventing suicide, training people to know how to intervene with those who may be suicidal, and offering support for those who have lost a loved one to suicide.” Since opening, If U Care, Share has worked with over 20,000 young people and  supported over 2,000 individuals who have lost a loved one to suicide. Earlier this year, they teamed up with CALM to work on Project 84 – a campaign representing the 84 men who take their own lives every week in the UK. Here, Matthew explains the birth of his charity, their powerful support methods and discusses the root of why so many young men are struggling.

“After I lost my older brother Dan to suicide at the age of ten, myself, my younger brother Ben, who was six at the time, and my cousin Sarah who was 11, really wanted to create a lasting memory of Dan. Before he passed away he was very outgoing, the centre of the party, always making people laugh and stuff like that. So we had no idea what he was going through, and still now really don’t know why he chose to do what he did. But we wanted to keep his memory alive while also helping others so we came up with this idea to create wristbands with the slogan ‘If U Care, Share’ – the idea being if you care about your family and friends you should share how you feel, and it had Dan’s name on the other side.

At the time we knew a lady who worked at the Samaritans so we contacted her and asked if we could raise some money for the Samaritans and we ended up raising  just under £50,000 for them by selling our wristbands at local football grounds in the North East of England. One of the reasons for that was that football played a massive part in Dan’s life. It’s a massive part of our family’s life but also we were starting to become aware that we weren’t the only family in the North East that had to deal with the aftermath of a suicide. Football has the ability to talk to so many young people and so many men so it just seemed perfect.

Then in 2011, it was my mum who grabbed a hold of the idea and took it to the next step. She spent time in my old secondary school working with some young people to see how we could actually make a real change. Fast forward to today, and here we are.”

On the work they do and the support they provide…

“When we lost Dan, people wanted to help us but they just didn’t know how to. Losing somebody to suicide is such an individual bereavement. So at If U Care, Share, we offer both practical and emotional support. I’ve worked here for six years and my main role now is on the prevention side. We deliver a lot of workshops about emotions and mental health, and I do talk about my own story, the impact of losing Dan and the importance of talking. We work in partnership with the Premier League, the Football League  and in local schools and colleges. Our main message comes from our name – we believe that sharing is important and that it’s OK not to feel OK. Everyone who works for us has been affected by suicide or has experienced a loss by suicide, so we can all relate to it and we use that to offer hope and a guiding light.

On the practical level, we offer support and guidance with things like an inquest because that can be one of the most traumatic experiences when it comes to suicide. But also, we offer different kinds of therapy such as aromatherapy massages for individuals who may be struggling with sleep or anxiety. We try to base our treatments on everything we’ve experienced but at the same time we do realise we as humans are all different. What I needed when we lost Dan was completely different to what my mum and dad needed. So it’s not about us going to the individual and saying this is what we can give you but actually instead asking what them what we can do to help them.

We have people who do boxing, we pay for people to go to the gym, some do cookery classes with us, others just like to go on long walks with their dogs, everybody’s different. We don’t force things upon people but help them find what will work for them.”

On why young men are struggling with their mental health…

“This is the million dollar question but for me, it goes back to education. I think we have had certain things ingrained in us that have sat with us and maybe subconsciously is till there. For example, when I was younger if I fell over I’d be dusted off and it would be ‘come, on be a brave lad.’ Whereas if it was my cousin who was a girl, people would be like ‘It’s OK to cry’ and stuff like that.

I think there has to be a break in the chain at some point where we just have to acknowledge from as young of an age as possible, that it’s OK for boys to cry. It’s not a weakness. We need to teach that from the ages of four or five because looking at the bigger pictures, these are the future dads, uncles, teachers and bosses. So if they’ve been taught throughout school and their time in education that it is OK to be in touch with your emotions and that it’s just as important as looking after yourself physically, that’s the only way we’ll see true change.”

On their work with Project 84

“On the day, Project 84 was out of this world. It was humbling to be part of but it was also a bit sour because one of those 84 people was my brother. And there are so many more out there every single week. We’re definitely not where we need to be yet. Someone said to me the other day, ‘stats are coming down slightly so is that not an improvement?’ But in my eyes, one suicide is too many.

We’ve got a petition going and the main goal from it is to have a political lead or a dedicated member of parliament for suicide prevention and bereavement support. The fact that we’re even having to do this petition is quite unbelievable. If 84 people in the UK died of Ebola next week, there would be a public outcry and you can just imagine the  amount of money that would be chucked at that to try and prevent it from spreading. But with suicide, it isn’t something that’s terminal, this is something that actually we can cure if we invest the time and the effort into people who need it. If we want to look at the economic side, research says that every death by suicide costs around 1.2 million on average. So when you  think of how this impacts the economy, it makes even more sense to invest the money into suicide prevention.”

“There’s a lot being done at the minute around kind of mental health problems and diagnosis’, and there’s a lot of awareness being raised that people are struggling. But the fact of the matter is, I don’t know if Dan was suffering from a mental health problem and I don’t think he was. I think sometimes life just gets tough and we need to give people the tools to actually deal with it. No matter how much you may feel like you’ve got your shit together, there are certain things that can happen in life that will completely knock you down. We need to be more resilient, we need to have more positive things in place so that if that does happen, we can act accordingly. Suicide is a permanent solution to a temporary problem, and we can prevent it from happening.”

For help and support visit CALM and the Samaritans.

Support the need to reinvent masculinity and end the silent suffering of men by signing up to our daily newsletters for the latest in progressive thinking.