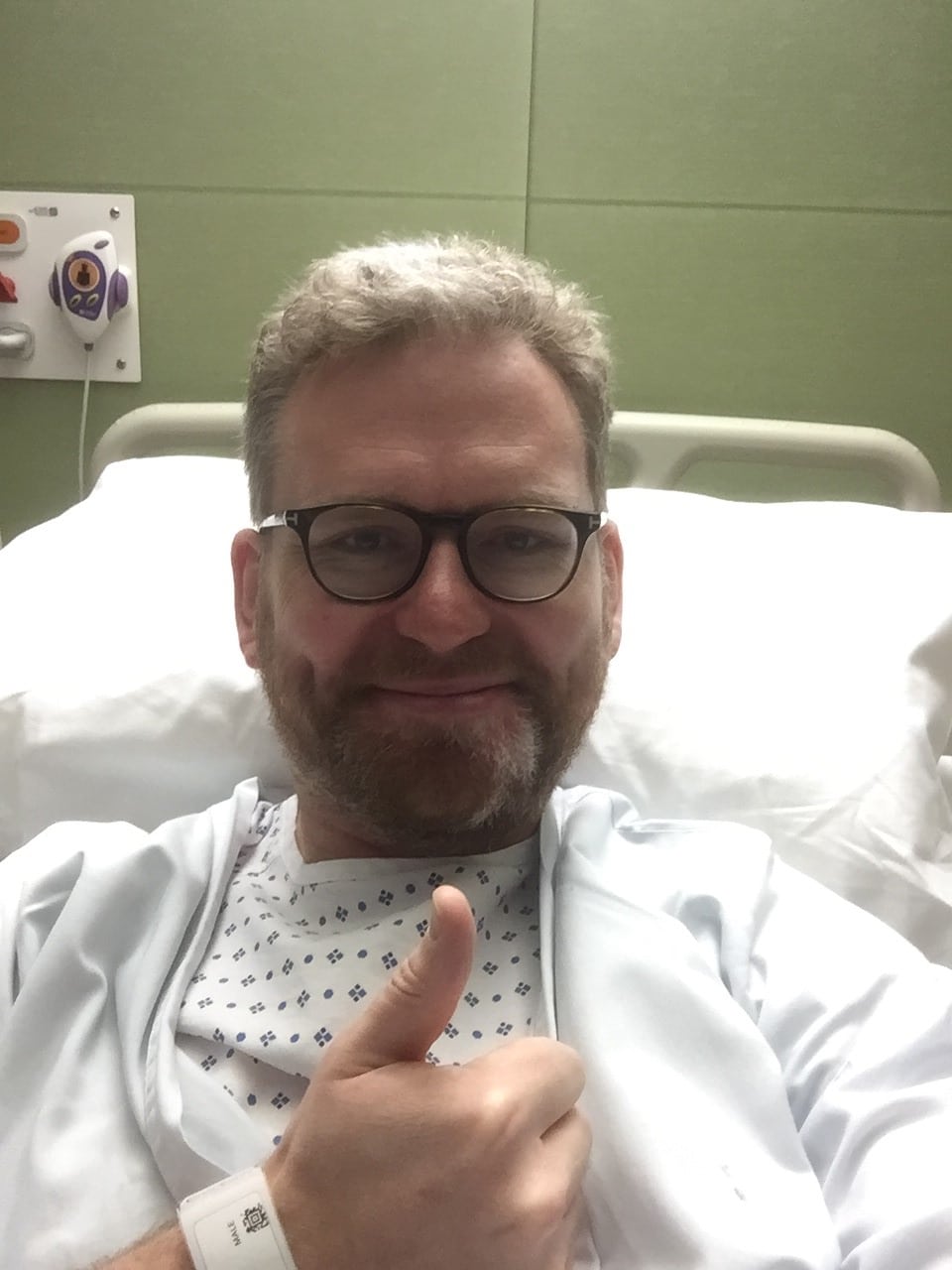 “No amount of embarrassment is worth dying for.”

Andrew is a lawyer, aged 35, who was diagnosed with testicular cancer. Here is his story of diagnosis, surgery, recovery, and the importance of men keeping an eye on themselves.

“It’s funny how you have very vivid memories of these things. I was lying on the sofa, watching TV. We’d got our son to sleep, it was mid-to-late evening. I was lying there and, when I moved myself a bit, something felt uncomfortable and out of place. I had a check and was like, ‘hang on, what’s that?’ I asked my wife to have a look and I think she thought I was trying it on – any excuse! But no, we both thought there was something there.

“Before I became a lawyer, I was at Cancer Research UK for 6 years studying for my PhD in chemistry, so, while it’s always been something I’ve been conscious of, I didn’t have a routine. From time to time in the shower I’d take a look and feel, but it’s not something you need to do in a set way or at a set time. It’s something people should have in their mind, that your body can change quite quickly and you know best what’s not normal for you.

Sometimes things can change fast so it’s really important to a) make sure you  are aware of your body, and b) if you do find anything, don’t hang around.

“When you’re first told, you don’t process it properly. No-one actually said the word cancer early on. My GP said it was probably a cyst that I should get checked out. No-one actually sits you down and says you’ve got cancer, it’s all very practical: you’ve got a tumour, you need surgery and this is what’s going to happen.

I found it more difficult telling other people. Actually forming those words, ‘I have cancer,’ is quite difficult to say. You don’t know how they’re going to react. I knew it was really treatable, and that’s usually the case with testicular cancer, it’s not as serious as it sounded – I could have surgery and be back on my feet fairly quickly. But other people worry when you say it and you have to deal with everyone else’s emotional baggage. I get that, but it makes things tough.”

“With the surgery, I was in and out in a day. I got to the hospital at about 10.30 in the morning, was operated on after lunch under general anaesthetic, but was in a taxi going home about 6pm. It was really quick.

I remember they came in before surgery and drew an arrow on my knee to mark which side they were going to operate on. You can laugh looking back: ‘Ok just check you’re not going to take the wrong one, guys.’ That would have been really distressing.

Recovering from it is more difficult. How they operate is by going in through your belt line from the top. It’s similar to where you’d have a hernia operation. They cut through a lot of your abdominal wall, so you lose a bit of core strength. And having a little boy, I couldn’t really pick him up. He had to spend time with his grandparents which was tough to have to go through that without having your family around you. But it wasn’t manageable having a hyperactive two-year-old around while I was laid up in bed. 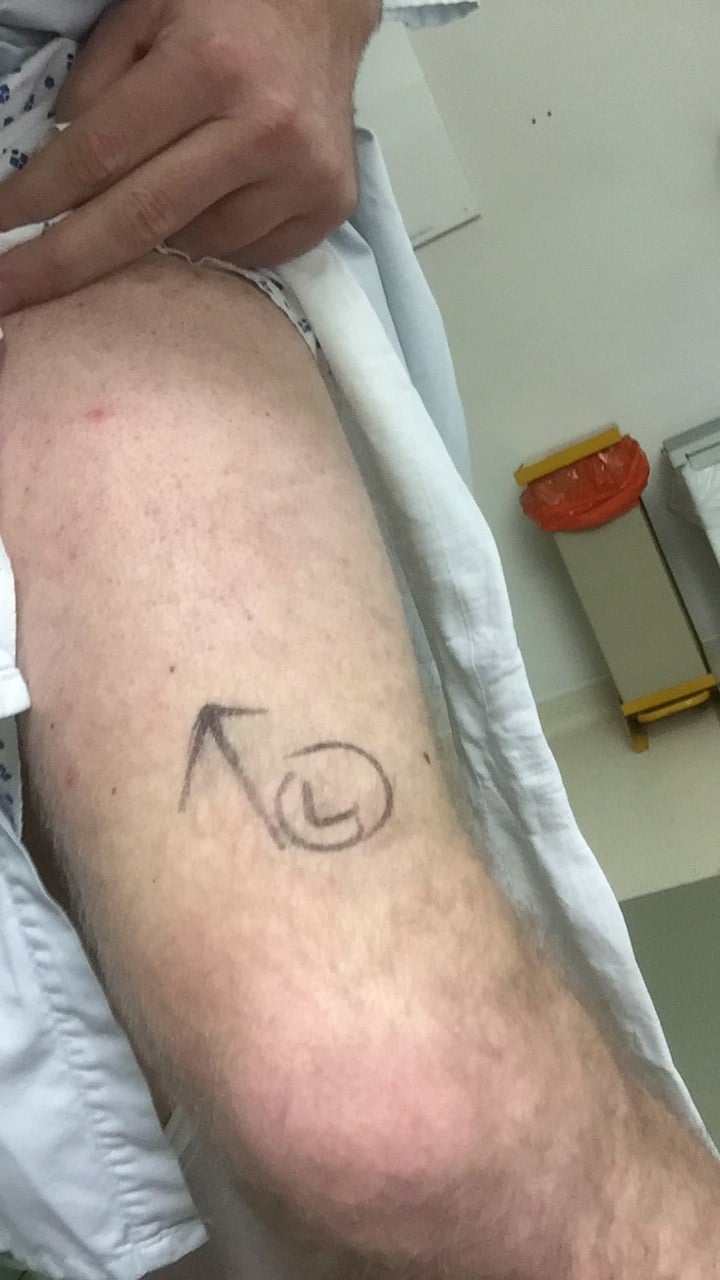 “In a way – my mum had breast cancer and she agrees with me on this – it wasn’t so tough when you face up to it and have the surgery, because you become very practical about it, you accept it and sort of get on with it. What’s tough is the aftermath. I didn’t need chemotherapy, I was lucky, although I might still need to at some point in the future. You have this five-year period of checks, including monthly blood tests and quarterly CT scans. It’s great to have such vigilance because if anything does come back, it’ll be dealt with quickly. However, you go for the first few checks feeling quite positive post-surgery but, once you get to three, four, five months out and you realise there’s this slog of another five years ahead of you, it can be tough to face up to. That was hard. I have a wife, a son and I’m self-employed. While you’ve got to get yourself better, you’re conscious of other people relying on you.”

“I was lucky that my oncologist referred me to a psychiatrist because it’s such a big life shock. I had a couple of sessions with a psychiatrist and it’s one of those things where you think, ‘who needs a psychiatrist?’, but actually it’s great – I really get why people do therapy now.

On men’s relationship with testicular cancer

Men don’t like to admit when there’s something wrong with them, and with testicular cancer, it’s about a part of you that’s integral to most guys’ sense of who they are. There’s no getting around the fact that the operation is taking away a part of you. Some people think it’s slightly emasculating, but I can still have kids and I’m not any less of a man than I was before.

I think a lot of men don’t want to put themselves through seeing a doctor about any health concerns – it’s the head-in-the-sand thing. But the problem isn’t going to go away. The more you leave it, the more of a problem it becomes. I went from seeing my surgeon to having the surgery in just six days and it was done and dusted – I was quickly on the road to recovery. I took a month off work after that but slowly eased myself in and life gets back to normal. If you notice any change with your body but leave it, the chances are you might need chemotherapy which will take you a long time to bounce back from. Even one round of chemo is invasive. So why would you put yourself through that because of a bit of embarrassment? 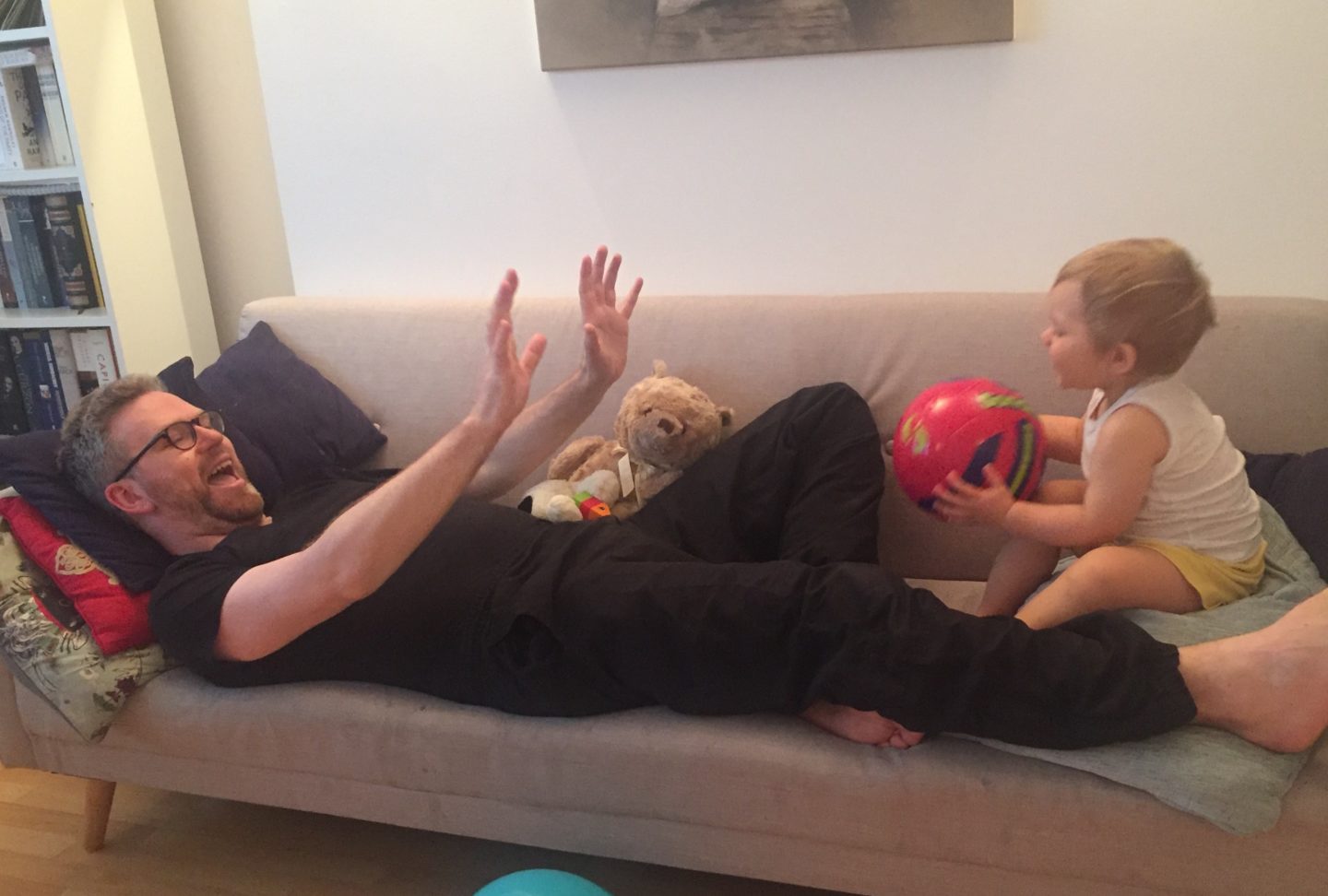 How it is today

“Now I’m living a normal life. I’m back at work, I went to the gym this morning. It took a bit longer than I expected to get back to being physically active – the surgery cuts through quite a lot of muscle so I had twinges and the nerves are still a bit frayed around there so I get numbness from time to time. But, in the grand scheme of things, I’ve had a tumour cut out and I’d rather have it cut out than still be growing inside of me. I can live with a bit of numbness and feeling sore every now and again.”

“I reached out to them because they funded my PhD in cancer research so I always felt a debt to them anyway. And, on top of that, I wanted to be an advocate for something that is treatable. Nearly all people with testicular cancer will go on to live a perfectly normal and healthy life. Campaigns like Stand Up To Cancer fund game-changing research, looking for brilliant treatments on the horizon which hopefully will be better and kinder for people.

“I was speaking to my oncologist about this and they said that testicular cancer affects mainly guys in their 30s and early 40s, and people who have had it can live longer, healthier, happier lives because they have been through a health shock early on in life. Some people cut back on booze, they eat healthier, go to the gym more, it’s a wake-up call early on – ‘hang on, I am mortal and I need to take a bit better care of myself.’

A message to men

“Don’t hang around. If something has changed down there or anywhere else, get to the GP. The quicker you’re in the system, the quicker you’ll get dealt with. Don’t mess about, get it checked out. No amount of embarrassment is worth dying for.”

Andrew is supporting Stand Up To Cancer, a joint national fundraising campaign from Cancer Research UK and Channel 4 to accelerate ground breaking cancer research and save lives.