The night before we talked, Thomas Hal Robson-Kanu had been promoted back to the Premier League with West Brom, following their draw with QPR, but the Wales International is surprisingly sprightly over Zoom. Well, perhaps it shouldn’t be surprising, given the professionalism of modern day footballers and also Thomas other career as the founder of an exciting new health brand. The Turmeric Co are disrupters in the ‘shot’ drink market, with a blend based on, yes, turmeric which has proven benefits on general well-being and the immune system. Proven on Thomas himself actually – the shot blend of the brand was literally a home-made recipe produced by his family at a point when a double cruciate injury as a teenager threatened to derail his career before it had begun; their desperate attempts to relieve his pain were not just successful but paved the way for this burgeoning business. Here are the highlights from our conversation about his life and business:

On West Brom being promoted

It was a big deal – this is the championship, and it is so competitive. The season has been something we haven’t experienced before, with lockdown happening. We tried to look after ourselves as best we could in that period, and came back in isolated pods of training of two players per pod. Then going straight back into the season with a game every 3 days for 4 or 5 weeks…it really does take it out of you. But in the end it was a massively successful thing for us.

On what Turmeric Co. is

The Turmeric Co was launched in 2018 as a health focused drink range which utilises natural turmeric root. It’s in a shot format with other superfood ingredients such as pineapple, pomegranate, watermelon, ginger…and it’s a blend I’ve been using personally for nearly 15 years. We as a family came across it because I suffered with two severe cruciate knee ligament injuries as a 16 year old.

On that severe injury as a young man

I required surgery for the injuries, so as a young professional I didn’t kick a ball for nearly 2 and a half years. After the second piece of surgery the surgeon told my father that I should probably look at a different career path. That I wouldn’t play at the level I was going to play at and also I would never play without restriction in my knees. And pain.

But being determined to achieve my dream of being a professional footballer, I committed to two and a half years of recovery.

On coming back, when I began to train my knees would be constantly swollen and I’d have severe pain in training, and afterwards. Really bad restriction. The physios at the club gave me the option of taking medication which helped with the inflammation but I began having adverse effects from these tablets. Passing blood, having severe nausea, and as a 17/18 year old experiencing that after having gone through those surgeries, it was quite a traumatic time.

It got to a point where I had to stop taking the medication, but we had to figure something out. I remember the day clearly: I’d just played a reserve game, and after the game I literally couldn’t walk up the stairs because of the pain my knee. I went to walk up the step and stopped and just broke down in tears. My dad was there and he said there must an alternative, there must be something we can use that helps me naturally without the side effects.

On discovering the healing powers of turmeric

We went on a research binge and looked at holistic medicine and natural remedies and came across all these natural ingredients which we were aware of but hadn’t really looked at in this context: ginger, pineapple, pomegranate, watermelon, and turmeric.

I had no other option so we made a commitment to it, we made a batch over a few days and started taking it. After 8 weeks of having it 2 or 3 times a day, one morning I got up and went into the shower and realised it was the first time I’d woken up in 2 and a half years without any pain in my knee.

It was mind blowing.

I thought, ‘Surely it can’t be that.’ So I stopped taking the shot mixture I was having and within 10 days the symptoms came back again. From that moment onwards I’ve had it as my secret weapon throughout my career.

I’d notice that I’d recover quicker than my teammates,  and in the winter seasons my immune system was really working well, I wouldn’t be getting sick.

I’d be taking the drink into training and have teammates ask what it was. I’d say it’s a turmeric shot blend, and then they’d want to try it. Everyone who had was shocked at the impact it had. 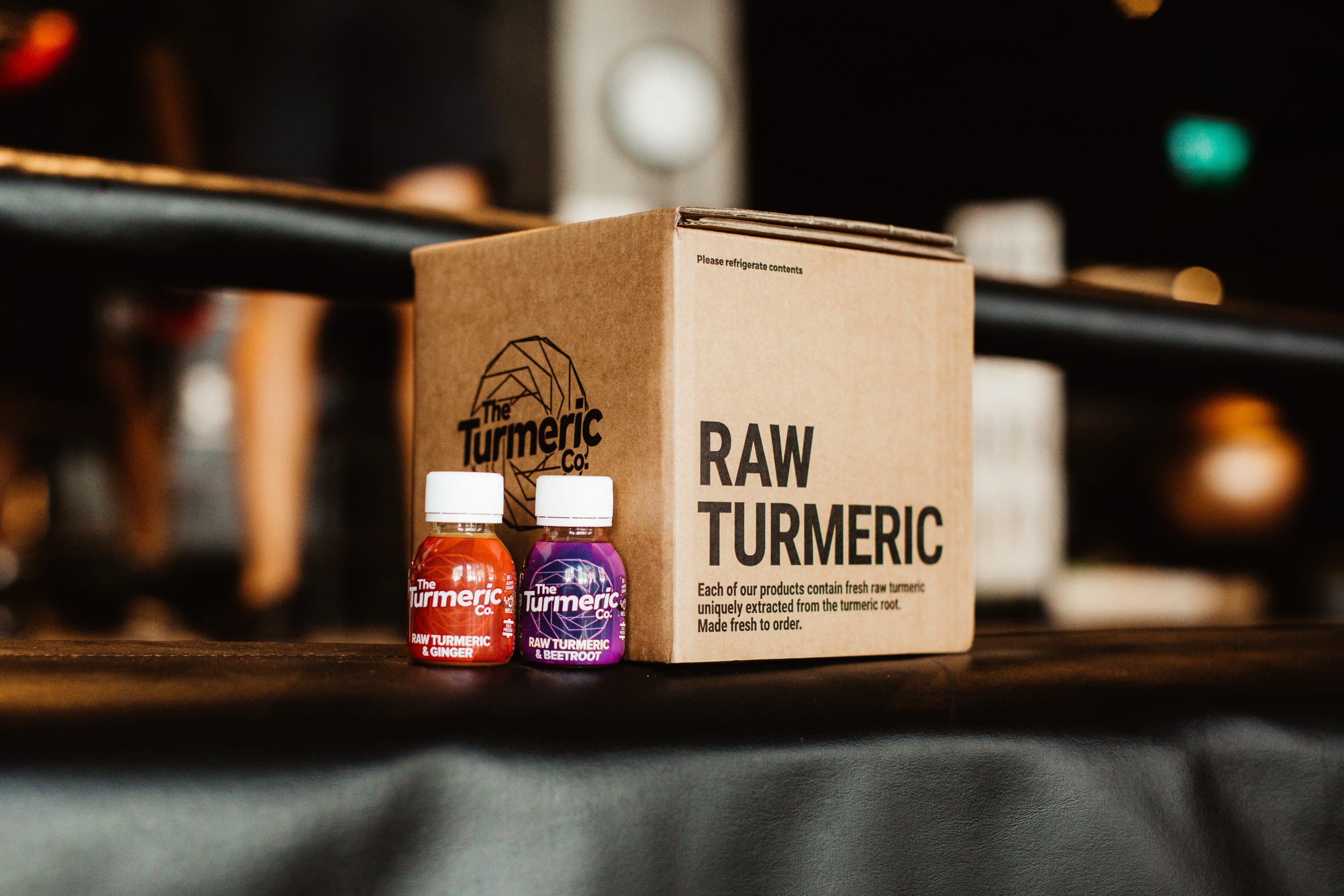 On making it into a business

Four years ago where I was in Harrods in the food market and saw a turmeric shot on the shelves, and thought, ‘Great, finally someone has realised that it’s incredible.’

And anyone who knows turmeric knows how difficult it to use as an ingredient, and anyone who has tried to blend raw turmeric will know it ruins pretty much any utensil that it touches. Seeing it on the shelves was like, ‘Finally we don’t have to worry about all that anymore.’

So I bought several shots, took them home, and we all tried them as a family. But we all spat it out pretty much, we couldn’t believe how watered down it was. It had been made with turmeric powder, which is not ideal and then the blend was about 80% apple juice.

Apple juice is a cheap sugary filler which doesn’t support anything nutritionally.

It was an eye opener to see that it was sold in Harrods when what we were making at home was far superior and was made out of functional requirements for me.

We made a commitment to bring what we made in our kitchen to the market. That was beginning of 2017 and it took us about 18 months to build the back end of the company. We wanted to build it so we could deliver direct to consumers, and build relationships with every customer. And in order to make sure every shot was to the standard that I was having.  we had to build our own production facility which was very costly.

But we believed in what we were doing, and in 2018 we released the Turmeric Co brand.  Within 3 months we were supplying the England rugby team and stocked in Planet Organic and Whole Foods. Our customer base has since grown to the point where last month we distributed 250,000 shots throughout the UK. It’s been an incredible journey.

On the new ‘shot’ culture…

The shot category is a new concept in western civilisation, but in Eastern Asia a corner shop would be full of health shots. Here the concept of shots is new but it has grown year on year by 300% whereas the juice category has fallen 5%. People are beginning to realise that instead of consuming 500ml of apple juice, that isn’t that beneficial, you can consume something convenient and more functional in its benefits.

On advice for new business owners

Doing something that matters and that makes a difference is really what will be the key.

We're absolutely delighted to announce we are in the finals of @TheGrocer Gold Awards 2019 'Start-Up Of the Year' category! What an incredible honour for our founder @RobsonKanu and the team following a successful first year 💪🧡#GrocerGold #Awards https://t.co/EowCZbP7pu