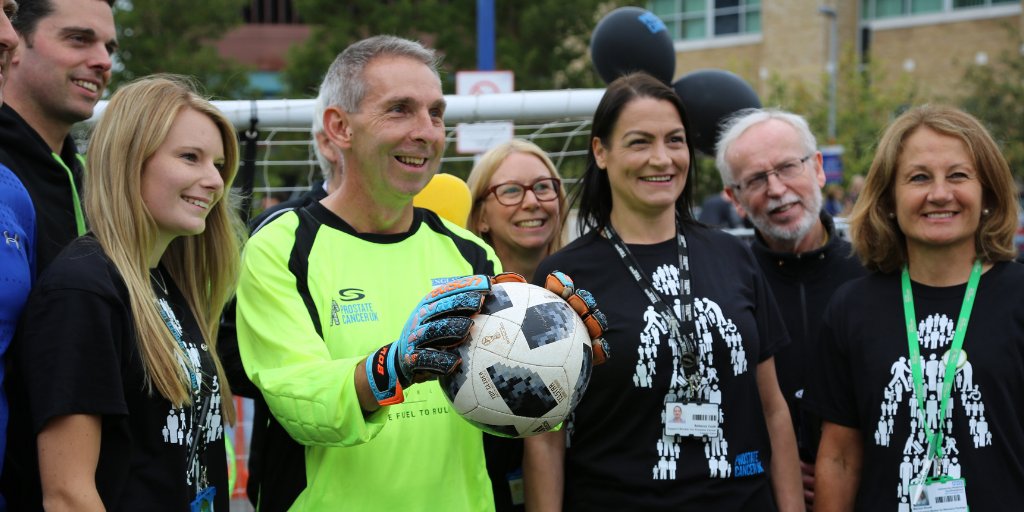 "Getting checked is important"

Why cancer diagnosis needs to be back on the agenda

Prostate Cancer UK are trying to encourage men to go back to GPs after an alarming, but understandable, drop in patients checking their health around non-COVID-19 matters.

The consequences of Covid-19 on the health of the nation have extended beyond the virus itself, with one of the most troubling knock-on effects hitting the diagnosis of cancer. Prostate Cancer UK have revealed that urgent referrals for urological cancers have dropped by half in England (49.5%). That’s the lowest in ten years, with the charity estimating there have been 27,000 fewer patients referred since lockdown began in March. This puts as many as 3500 men with higher-risk cancers in danger of being diagnosed too late to be cured.

As such, Prostate Cancer UK are encouraging men at increased risk of prostate cancer to contact their GP about a PSA (Prostate-Specific Antigen) test to indicate any problems. Men with an increased risk include men over 50, particularly black men, and those with a family history of cancer. The difficult thing is prostate cancer is often symptomless so it really does require personal impetus to tackle.

To shed further light on this we spoke to Rob Keating, a man who had a prostate cancer diagnosis in 2018 while being in the unique position of working as a prostate cancer clinical nurse at Southampton University Hospital…

Could you tell us how you were diagnosed, Rob?

I’d been a cancer nurse for 30 odd years, and I now specialise in prostate cancer as a nurse specialist in Southampton general.

Back in 2017 I had a blip on my PSA. I had no symptoms at all but it prompted me to do some investigations. More PSAs and an MRI – that wasn’t concerning but I went on a surveillance program within my own department.

Over a couple of years I just wasn’t happy with the trend of how my PSA was going, so they repeated the MRI and it had changed. At that time I had no symptoms or problems but because I had this expert knowledge meant I had it assessed again – and that’s what led to the diagnosis. I had biopsies of the prostate and the finding was that it was prostate cancer, and I needed to have treatment.

In June 2019 I went through surgery to remove the prostate and I’ve just recovered from that now and doing well – although I’m on surveillance.

But lots of good things have come from it. I do a lot of sport and one of the sports I went back to was walking football. We do a lot in relation to prostate cancer, mental health, cardiovascular issues, so that’s been a good outlet, another way of promoting men’s health.

Well it’s football where you can only walk! It’s a good sport, mainly for the over-50’s who want to be fit. There’s no contact, you come for a bit of fitness at your level, but it’s very social – you have a  chat after, with social activities. The game has got semi-professional, there’s a walking football association and they’ve developed international teams.

I got selected for the first ever England team and we went on to win the Euros and played in Italy and Greece. We have a world cup next May, COVID- allowing. It’s very competitive.

Can you tell us about the importance of mental health care when you have a diagnosis?

It’s really hard because you realise as you go through the diagnostics that your life might be shortened. So you look around and find family is massively important, and friends and colleagues. What I found is your social side, football or whatever, is crucial. If you’re able to talk about it and express what you’re going through it’s amazing the people who come forward and give you that tap on the shoulder to say, ‘I experience this or that too.’ They start sharing with each other.

I’ve never known such a change with men. With sport and even in my job more men are starting to talk about their problems – mental health or physical disability from this kind of treatment. I think it’s been a big shift in the last few years, that men are more willing to talk about these things.

How was it at work?

My professional colleagues were good, I was able to tap into them. But they got stressed looking after me. We put in a strategy for that – as they were worried about me, I decided where I’d go for treatment, to come away from where I worked, because I was feeling the stress I was causing in everyone else, and that then helped me cope with mine.

It must have been scary for you?

But talking about it, keeping fit and healthy, and using the people around you has been key. Using Prostate Cancer UK, Macmillan, there’s some great people out there.

What has been the impact of COVID-19 on your work?

Prostate Cancer UK are doing a new initiative to try and raise awareness about this – my referrals have tailed off massively since COVID. I used to be seeing 15 new people a week to be diagnosed, and I’m seeing 3 or 4 now. So all these campaign to get people back to their doctors or aware that they need to get themselves checked is really important.

Prostate hard to diagnose isn’t it, and people are presumably less willing to have a check up?

Yeah a lot of it is ad hoc as a lot of people have no symptoms – so they might be at their GP having a repeat medication or different problem, and the GP might say you’re at that age where you should get checked. Or they might mention a little, apparently unrelated problem – a waterworks problem – and that can be enough to do a PSA.

About a third of our patients don’t have cancer but were knowledgeable enough to be screened out. People think they have to come for quite invasive investigations but they don’t now. Some people you can screen out quickly and some people need a few more tests before you can do that.

Now people aren’t seeing their GP and a lot’s being missed, that ad hoc ‘have an extra blood test’.

We were doing so well! Prostate cancer wasn’t that well known years ago but it’s done massively well in getting the awareness there, but like a lot of cancers its struggling to get the numbers back through. 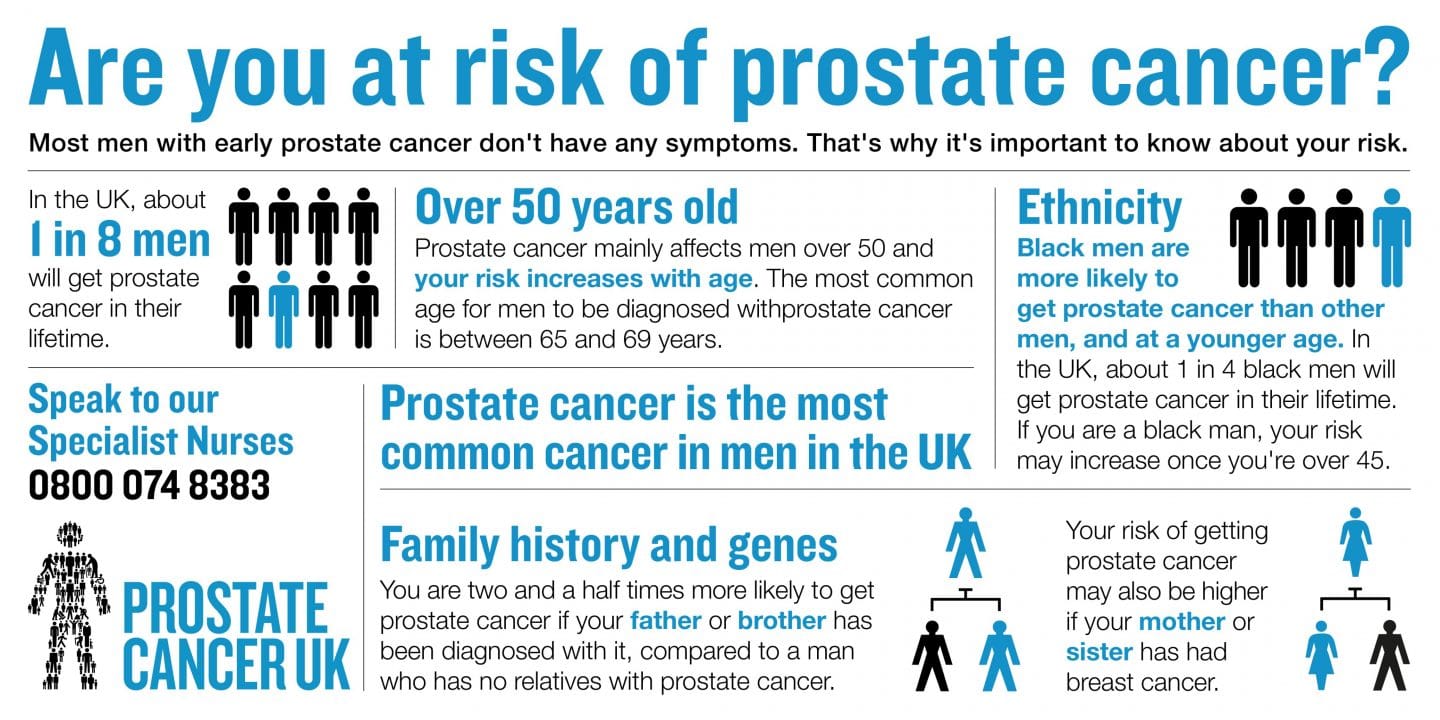 What happens in the tests?

The PSA test is not the greatest test but it gets you through to be assessed by a urologist. And then he can do a family history. If need be, he can do a rectal examination of the prostate, to help us decide if an MRI, the next step, is needed.

It’s less invasive than people think, but the earlier you see them the better. Generally prostate cancer is more common in men over 50 but if it’s a more aggressive type of prostate cancer it will eventually spread and we see that, we see people presenting with advanced cancer which is not curable.

From 50, anybody should have a PSA test, and it could be just an annual PSA test. But if you have an increased likelihood, a family history, if your dad had prostate cancer or if your mum had a breast cancer. Black men over 45 should be having a test .

People are living longer so it’s important. You want to stay healthy and well.

What else can people do?

It’s good to ring Prostate Cancer UK because you get a little bit of advice about how to talk it over with your GP. Also with their family – often you find with families you don’t know about each other in the past. Because people didn’t talk about it years ago you wouldn’t know there was a history of cancer. Then there’s people who have been adopted or lost family members – lots of people don’t know about their family history.

How are you with work now?

I don’t think there’s a precedent for someone having the cancer in the area in which they work. You just carry on back in the job. I’m reminded of it more than I maybe should be on a daily basis, but I’ve learned to deal with that. Regularly I’ll have patients who are quite similar. I don’t share my experiences with them directly – I am professional with them because people need to go through the process themselves – but I have that extra bit of insight to help guide them without influencing them to do what I did.

Because there are loads of options for treatments, and people need to understand that with their diagnosis, they can choose different treatments, they don’t have to do what I did. It’s an interesting cancer, you can almost choose your treatment. Some cancers require one way of treatment but with prostate cancer if you diagnose it early enough you almost have a catalogue of options. 4 or 5 options of what to do.

You have to help people to get a point where they feel comfortable and confident in what they’re doing.

I’ve used my experience to help people going through it themselves. It’s definitely helped me to support people now and in the future. I’d like to carry on being a support to people in some way who are going through cancer care.

To help men find out whether they are at increased risk of developing the disease, Prostate Cancer UK has launched an online risk checker, available at prostatecanceruk.org/riskcheck 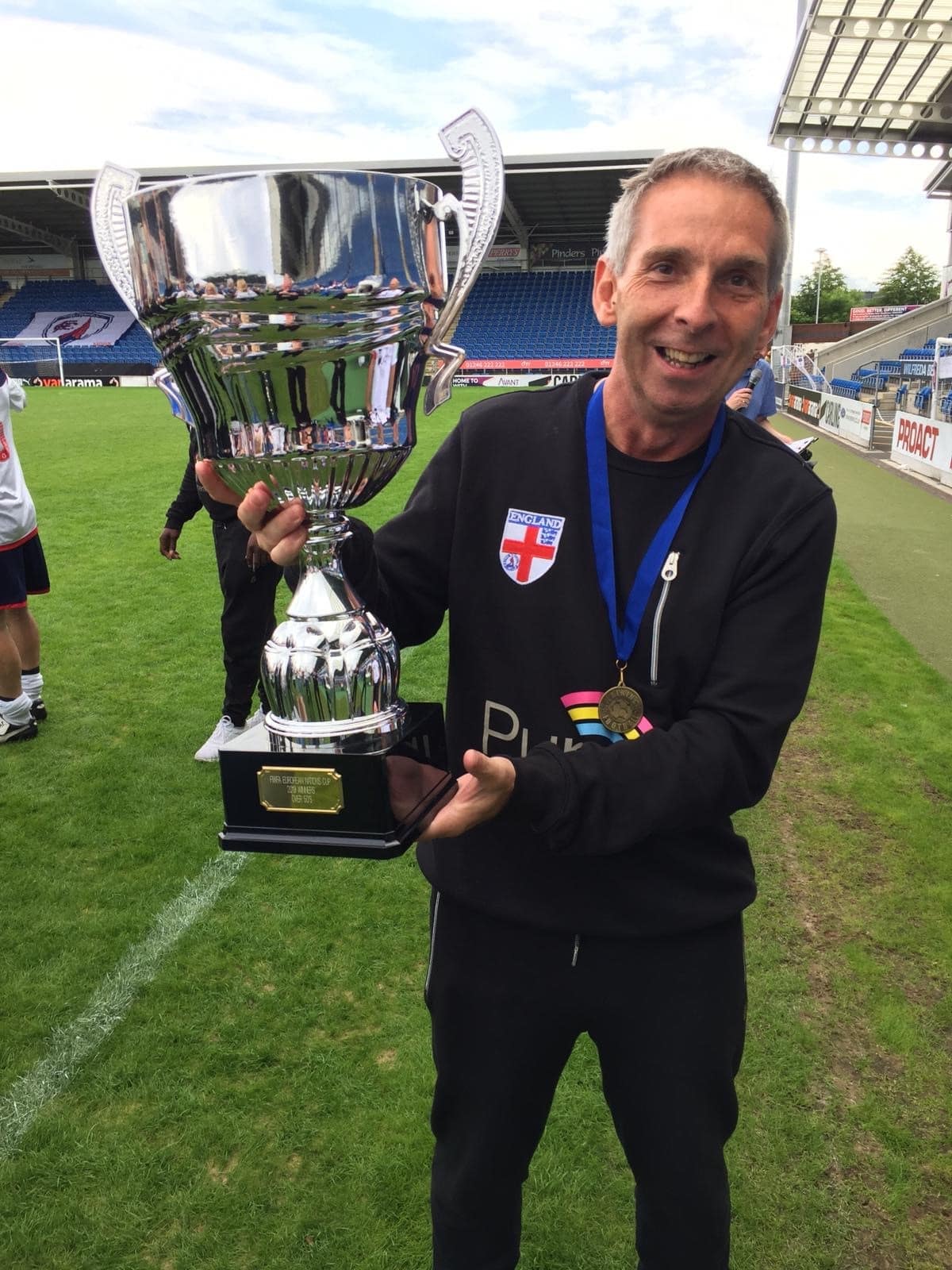 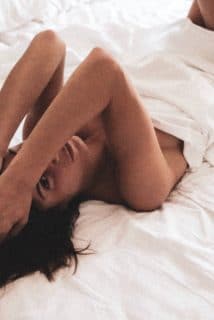