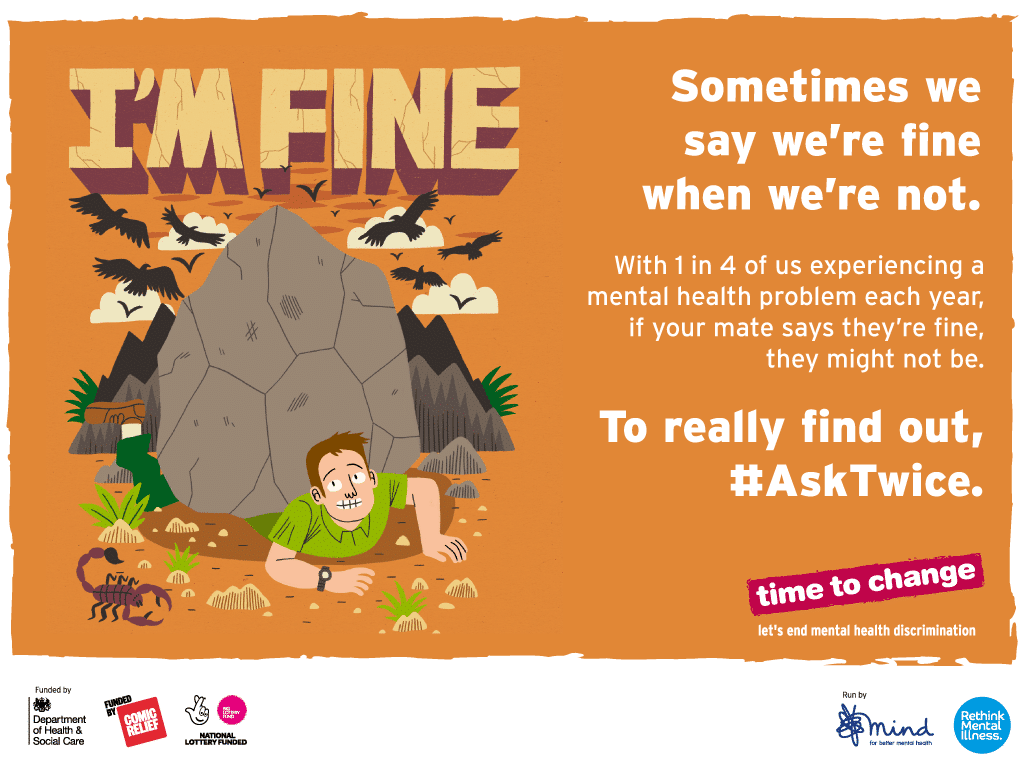 Government cuts are curtailing the work of one of our favourite mental health organisations. Time To Change is going to leave a big hole...

We are saddened to hear of the closure of the esteemed mental health campaign, ‘Time To Change’. Over the last 15 years it has been a shining light in campaigning for better understanding and action with regards to mental health; without them, it is unthinkable that we would have come so far as society in dealing with this problem.

In an announcement on their website today, they put the closure down to the government pulling its funding; a worrying sign that mental health support will not be prioritised in the economic challenges caused by the pandemic even as its effects on mental health are one of the biggest risks to the nation.

All is not lost, though as the charity will continue to work on two events each year: the Ask Twice campaign in November and Time to Talk Day on Thursday 4 February 2021.

Here is the statement by the charity, which looks at their remarkable achievements:

‘It is with great sadness that Time to Change, England’s globally respected mental health anti-stigma and behaviour change campaign, announces it will close on 31st March 2021 after 15 years.

Since the campaign launched, 5.4 million people now have improved attitudes towards those of us living with mental health problems. Not only that, research shows people’s willingness to live, work and continue a relationship with someone experiencing a mental health problem has also increased by 11.6% – a remarkable behaviour change. Despite this impressive track record, and identifying that the job is not yet done, the Government has confirmed it is not in a position to fund the programme into the future.

When Time to Change first began, mental health problems were truly taboo. Headlines in national newspapers mocked people living with mental illness; many people were afraid to speak about their experiences to their closest friends and family; and the vast majority of people needing time off sick with a mental health problem would tell their employer they had a physical health problem instead.

Since then, over 9,000 champions with experience of mental health problems, 1,600 employers, 3,000 secondary schools and a network of regional Hubs have joined Time to Change’s social movement. Together with its Champions and supporters, Time to Change has achieved a significant reduction in mental health stigma and discrimination in England: a true sea change in the way people think and act.

In the remaining months, Time to Change will continue to encourage people to be more open to mental health to help end the isolation, shame and worthlessness that too many of us feel when experiencing a mental health problem. The campaign will continue to deliver two peaks of national activity: the Ask Twice campaign in November and Time to Talk Day on Thursday 4 February 2021.

While Time to Change has been the principal mechanism by which its partners – Mind and Rethink Mental Illness – have delivered behaviour change at individual, organisational and community levels since 2006, the charities have always challenged, and will continue to challenge, stigma and discrimination in their own work. Over the next few months, Time to Change will turn its attention to embedding anti-stigma outcomes into the work of Mind and Rethink Mental Illness, while continuing to highlight the importance of tackling mental health stigma and discrimination to the Government.’

Jo Loughran, Director of Time to Change, said: “Over 13 million adults in England, that’s 1 in 4 of us, will experience a mental health problem each year. Thanks to the Time to Change movement, we have seen an outstanding improvement in the way we all think and act about mental health. Many more of us are now comfortable disclosing a mental health problem without shame or fear of judgement. Ultimately this is the very first step in getting the help, support and treatment we need, and deserve.

“Time to Change has created a strong legacy where more people living with mental health problems are able to live their lives to the full without stigma damaging their relationships, education, career and ambitions. But despite phenomenal progress, our research shows that certain groups have not yet felt the benefit of improvements in public attitudes or behaviour change – including those living with less understood diagnoses such as schizophrenia or people from black and minority ethnic communities*.

“We had hoped to continue to fight for equity and end discrimination, working with these communities and others whose lives continue to be severely impacted. Sadly, we will not be able to carry out this vital work but will spend the coming months making sure that our ambition is driven forward within the work of Mind and Rethink Mental Illness.

Jo added: “We know that in times of financial hardship, attitudes towards people with mental health problems tend to deteriorate, so there is a real threat that the improvements we’ve achieved will slide backwards. Right now, the true impact of the pandemic on our mental health is still unknown. What we do know is that there are difficult and uncertain times ahead and it has never been more important to look after ourselves and our friends and family: to talk, to listen and to check-in. That is why we will be working with individuals, organisations and communities right up until the last moment of our current funding and encouraging them to continue campaigning into the future.”

Sadly, after 15 years campaigning to improve attitudes and change behaviour around mental health, Time to Change will be coming to a close on 31 March 2021. We want to thank everyone who has joined us in the fight for equity. Read our full statement at time-to-change.org.uk/update Although we have been unable to secure funding, we will continue to campaign right up until 31 March 2021. We’ll also be working closely with our charity partners @mindcharity and @rethinkmentalillness to make sure mental health anti-stigma work continues.