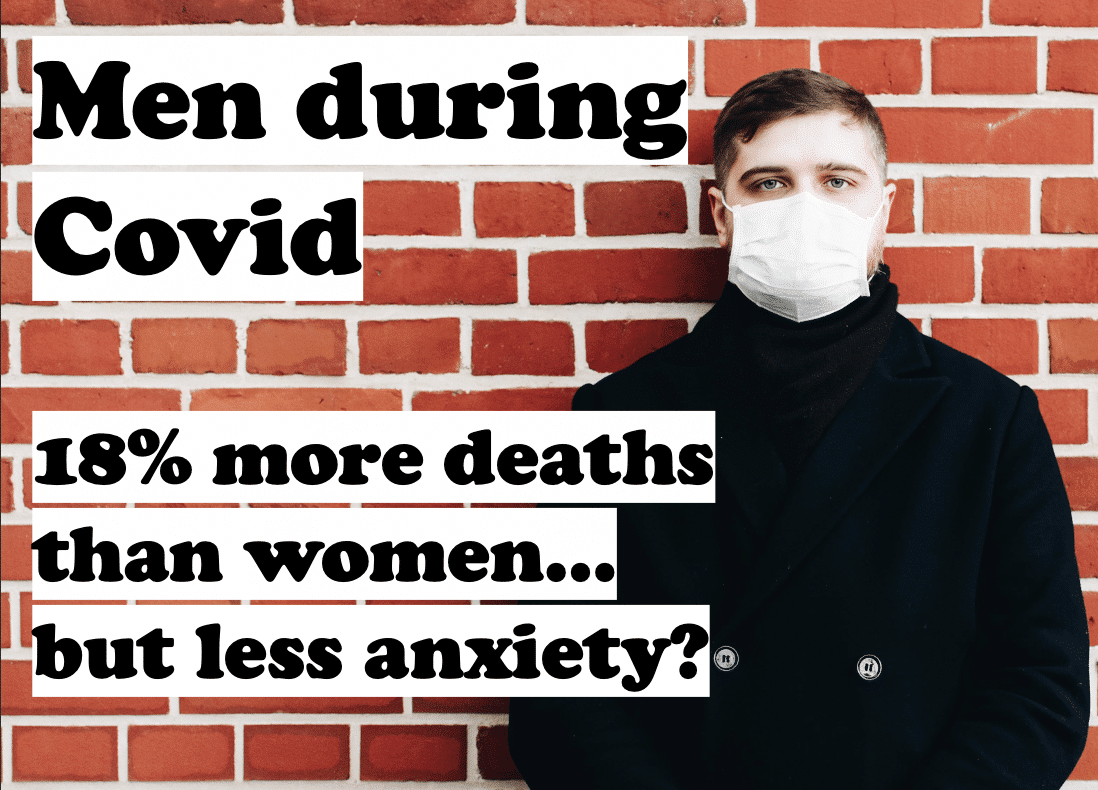 Research is showing that a higher mortality rate for men during Covid - but also that they were feeling less anxiety. Why is that?

New research by the Office for National Statistics has revealed that more men died from COVID-19 but women’s well-being was more negatively affected than men’s during the first year of the pandemic.

The research is very interesting for discussions around men’s health and masculinity. 18% more men than women died in the UK, but the stresses and worries of life during lockdown tended to affect women more, according to these statistics. You’d think that the higher threat to our lives would make men more anxious but on average it wasn’t the case. Because men are braver, stronger people? We jest. No, it is perhaps due to a significant gender separation in how we were living during lockdown: the ONS made a link in their research to associated data that women were more likely to be furloughed and were doing significantly more unpaid housework and childcare. The weight of home life was seemingly lighter for men.

Experts have reasoned this is the case because men are more likely to have heart disease, type 2 diabetes, chronic lung disease, and other cardiovascular diseases, and also be obese – all conditions that significantly increase risk.

According to virologists in one report, women’s immune systems are also generally more resilient than men’s due to oestrogen, which helps the immune system to act faster and more aggressively against pathogens, whereas testosterone can inhibit the body’s own defences.

Likely more insight on this will come out as scientists continue their investigations but  there is a lifestyle implication here as well. The World Health Organisation have detailed that men die younger than women worldwide because they are more likely to engage in high risk activities: more likely to die from alcohol and drug related deaths and car accidents, and also from diseases like TB because they are less inclined to go to the doctors. Masculinity, then, plays a role is the mortality rate – male behaviour rather than any biological destiny to die young. Therefore some of the more traditionally masculine behaviours such as high-stress work, heavy drinking, aversion to seeking help with symptoms, may also be a contributing factor to more men dying from COVID-19.

What’s intriguing is that while there is this notable higher risk, according to the ONS research, during lockdown men felt the stress and anxiety less than women. This was linked not to any different perspective on the pandemic, or a different way of handling pressure – like admitting it! – but to specific issues splitting the genders.

For instance, a consistently higher number of women were furloughed from work than men. In July 2020 there were 2.9 million women on furlough compared to 2.7 million men.

It seems also to be the case that women were taken on most of the burden of childcare and housework. While in the early month of lockdown men were taking on an extra 13 minutes of housework a day than usual, from an average of 1 hour and 45 minutes a day to 1 hour and 58 minutes a day, that dropped to 1 hour 40 minutes by October. In terms of childcare, men were taking up more of a burden in March and April, although women were still doing 49% more; but by October women were spending 99% more time than men taking care of the children.

Now whether this was men getting somehow bored by all this ‘caring’ and deciding to simply put their feet up and enjoy themselves, or if, due to average male salaries being higher, it was a family necessity to have the higher earner working at the expense of other duties, it’s unclear. Certainly men have been suffering with their mental health, even though they may not be talking about it. Sometimes that can be forgotten and these subjects do seem to get framed as if men aren’t interested or that it’s based on prejudice where they secretly believe women should be 50s housewives. Sure some societal beliefs and gender roles run deep, and are hard to shake, but we do believe there has been a reflection by men on their lives and priorities, and a new engagement in family time and duties. That’s not to say all men are goodly housekeeping saints-in-waiting – the domestic abuse figures during lockdown have alarmingly showed that – but the chance to have a break and a reassessment has had an effect, even if a lot of men are beholden to trad work practices and hamstrung by current financial position. But the exodus away from big cities – with London’s population set to fall in 2021 for the first time since 1988 – shows men are looking at home working and flexible working as a viable option. It’ll be interesting to see how many people will go back to work on fewer days when everything is reopened, and if the old office overtime is ditched in favour of family time and domestic duty.

At this stage, anything approaching pre-pandemic life will feel like a glorious return, but what values must we hang on to from this time? It would be a shame to simply dive back into the old life, and not adjust it to our will. Wrong in fact: there’s potential here for a more equal society, if we want it.