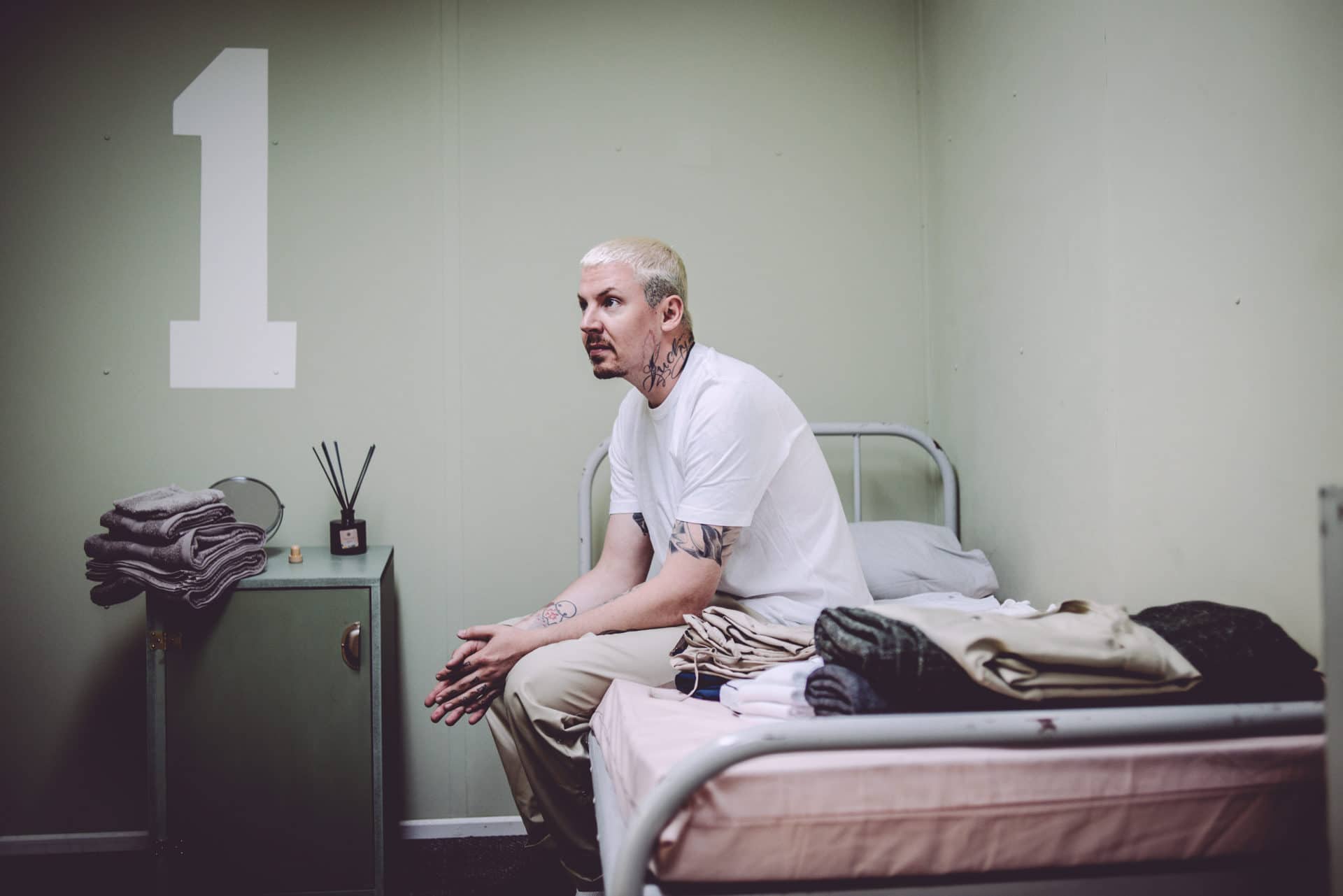 Stephen Manderson writes about his experiences on the show 'Celebs in Solitary': the isolation, the boredom, the scrutiny - and the eventual triumph, on his own terms.

‘Shall I politely decline on your behalf?’

I received an e-mail from my manager of 14 years, Ged, asking if he should ‘politely decline’ to ‘the below’ on my behalf.

‘The below’ was querying my interest in being part in a social experiment where I’d be removed, for up to five days, from all forms of incoming streams of information and stimulus: I’d be in solitary confinement without even a book to read.

I can’t think of any other opportunity to be away from absolutely everything – I would by all accounts be alone.

Just me, myself and I.

On my tod with just my thoughts.

Why on earth would I not want the chance to spend five days away from everyone and everything?!

Well, maybe because the world might end and I’d leave solitary to find myself in post apocalyptic Belfast.

Maybe because I’ve been plugged in for so long the isolation would drive me crazy.

Maybe because I was on an incredible run in the studio – I was leaving every session with something exciting, normally a nigh-on finished song, or in some cases two or three; what if this was the end to the run?!

Or maybe because I’d miss my dogs.

I had to weigh the possible positives/negatives up.

If I was going to do it it was going to be for me, and not for the enjoyment of producers or viewers. I’d use the time to re-centre, to re-group and to process.

I could miss calls and no one could moan. I’d be free from the horrible device that so often induces panic by way of 263 unread whats-app messages or missed calls from people I can’t quite ignore but that I sometimes wish I could. The bastard thing about this panic inducing device is it also induces anxiety by way of separation; damned if you do, damned if you don’t (have your phone in your pocket).

I could relax, truly relax, if I could let go of the worries relating to the world I’d be taking a brief break from. I’ve spent years trying to master the art of not worrying about things outside of my control and this would be a perfect opportunity to do just that: worrying would serve absolutely no purpose and would only cause me stress as I’d be somewhere I couldn’t do anything about. . . anything, apart from jot what I thought or felt down in one of three ‘luxury’ items I’d be allowed to take into solitary: my pen and my pad. I also took a vape (been off the fags for months now) and a diffuser (which they’d later take away, but not before I ‘accidentally’ spilled loads of all over the disgusting carpet so it smelt half decent in there).

A blank page is a brilliant thing, awaiting your first stroke in indelible ink as you begin to express an idea that you’ve been incubating.

But it can also be the enemy, especially when it’s an actual pen and pad and not just ‘notes’ in an iPhone, where you can look back on and over anything written to correct and/or change if necessary. Ink is permanent, and my handwriting is terrible. 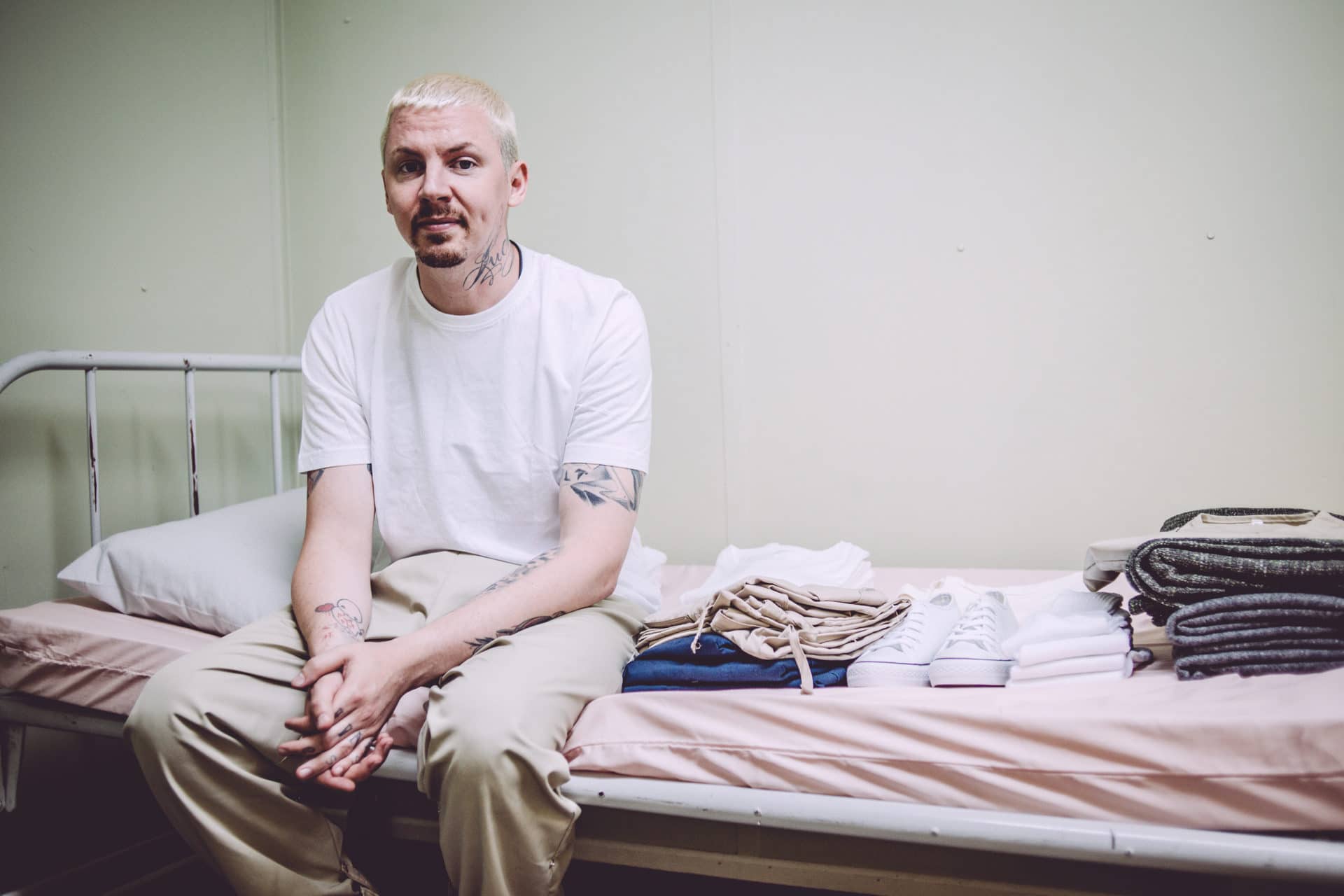 Fuck it, it’s worth it if even just for the break from myself, or the self that I am depending on who you are and what you need, or what our encounters require.

Here’s where it gets interesting.

Who am I? Who are you? Who are any of us when we’re not the self we project onto peoples perception of us?

i.e. we have a conversation and I say something that you laugh at. I walk away thinking, “he thinks I’m an idiot,” but you walk away thinking, “he’s a laugh.” Part of how I see myself is influenced by an assumption I’ve made based on how I was feeling during that conversation and afterwards, without ever consulting the person I was talking to for confirmation either way.

In the first 24 hours I didn’t write a single thing, I just looked at my friend/enemy ‘the blank page’ and. . . nothing.

The first page in the book reads:

‘I imagined solitary to leave me feeling alone, to leave me feeling lonely. Instead there’s a constant feeling of being watched, of being monitored. It isn’t the isolation, the surgical lighting, the filthy carpet, the psych-ward bed or the non-flushing toilet (even the toilets at Glastonbury flush) that’s making me feel uncomfortable: it’s the prying eyes. It’s being aware that I’m anything but alone; not wanting to do, say or even write anything because someone’s watching. I’m on my own but without the privacy I’m normally afforded when I shut my bedroom door.’

‘I’m a little bit concerned about eating a chicken dahl out of a packet that has a best before date nearly three years from now’.

In combination with a toilet that didn’t flush I really didn’t want to tempt fate.

I’d got beyond boredom. I thought I was bored for the first however long I was awake but actually I just was without stimulus. I was still. I was writing.

A few random thoughts on the second page:

As I was without a clock or daylight I could only really measure my time in there by how many times I slept and woke up.

Time is a concept, and something I have no concept of.

I spent quite a lot of time sleeping.

Apparently everyone copes with isolation differently but I think my sleeping 17hrs upon entering the container was more than a coping mechanism. I’ve never been a good sleeper and I’ve never really delved into why this might be, but through wondering about why I might have slept for so long upon my entry, I realised it was a completely safe space – although being monitored had initially hindered me creatively it had given me security that few of us have in real life.

I’d succeeded, I could put my head on a pillow and close my eyes knowing there was nothing to worry about, founded or otherwise.

I wasn’t worrying about anything out of my control.

I started what turned into an article on ‘Self Sabotage’ after the ‘red button’ I had to press to leave caught my eye.

I wrote a list which started with the songs I had to finish and what was needing doing to finish them, and ended with ‘• write more lists’.

I wrote a song. I actually wrote contributions to several songs, but without an instrumental I plucked a melody out of thin air for what looks to be the last song on my 4th album. A track called ‘ashes’ which quite conveniently begins ‘there’s only so many ways to say, goodbye, so goodbye’.

I didn’t initially have the last line of the chorus, so i got ready for bed, turned the light out, and put my head on the pillow to go to sleep for which by my count would have seen me almost, if not through, the remainder of the 5 days.

And then it happened.

‘Ashes to ashes and dust to dust’

The last line of the chorus. Done. 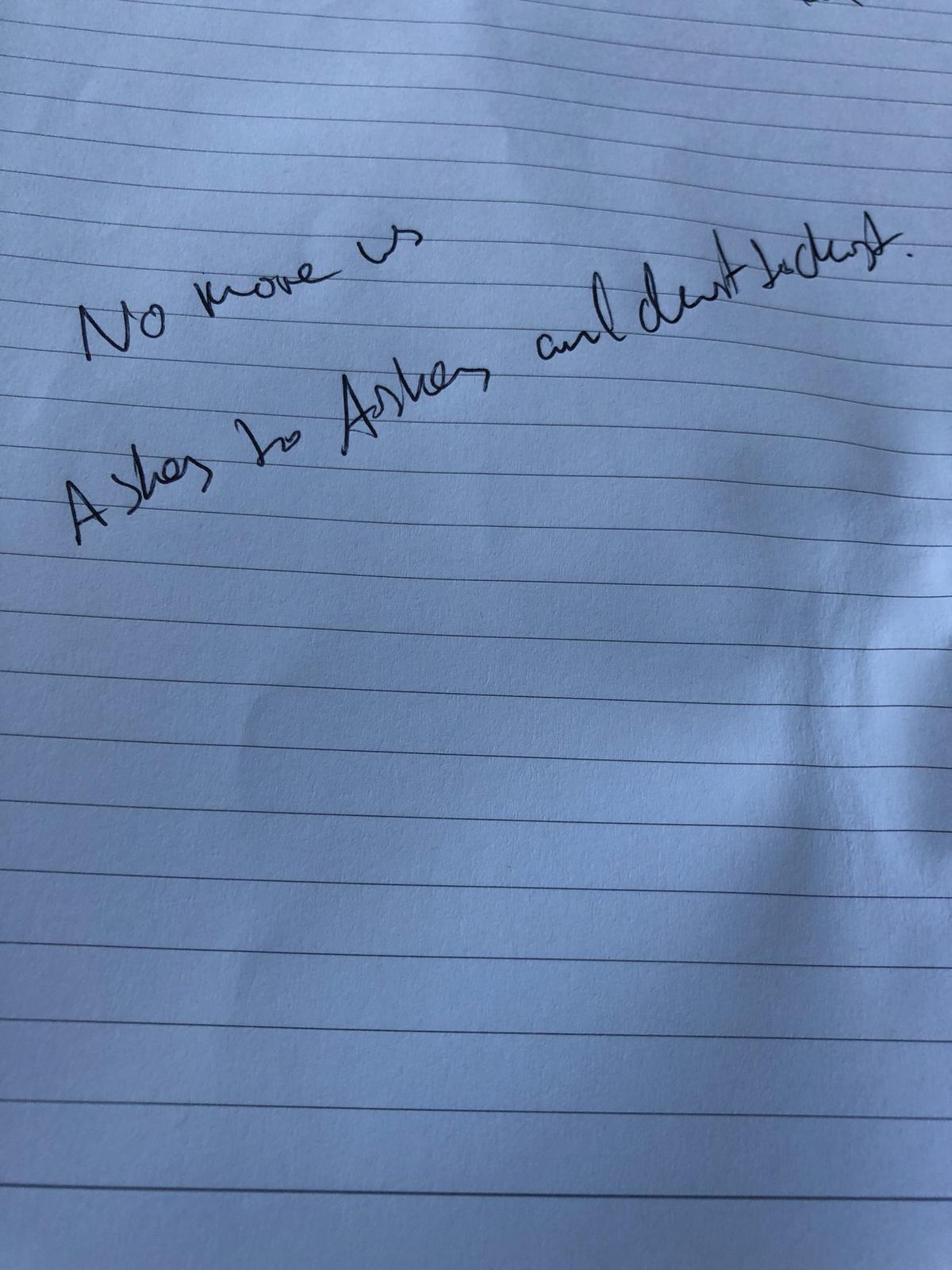 I got out of bed, tidied my room (always leave somewhere how you find it!) and pressed the eject button. I didn’t know what the time was, but I knew it was time to pull the chord.

I’d taken all I could from the experience, all of which was incredibly positive: a better understanding of self, a reminder of how important time in your own company is, a newfound appreciation for flushing toilets, and a song. A bloody song! I’m not sure it’s going to be the number 1 single my Nan asked me to write while I was in there due to its explicit content, but its a song all the same.

I left the container, called my Nan, grabbed my possessions and. . . went to bed. Only this time in a hotel. With the TV on.

Watch Stephen in ‘Celebs in Solitary’ on my5.tv 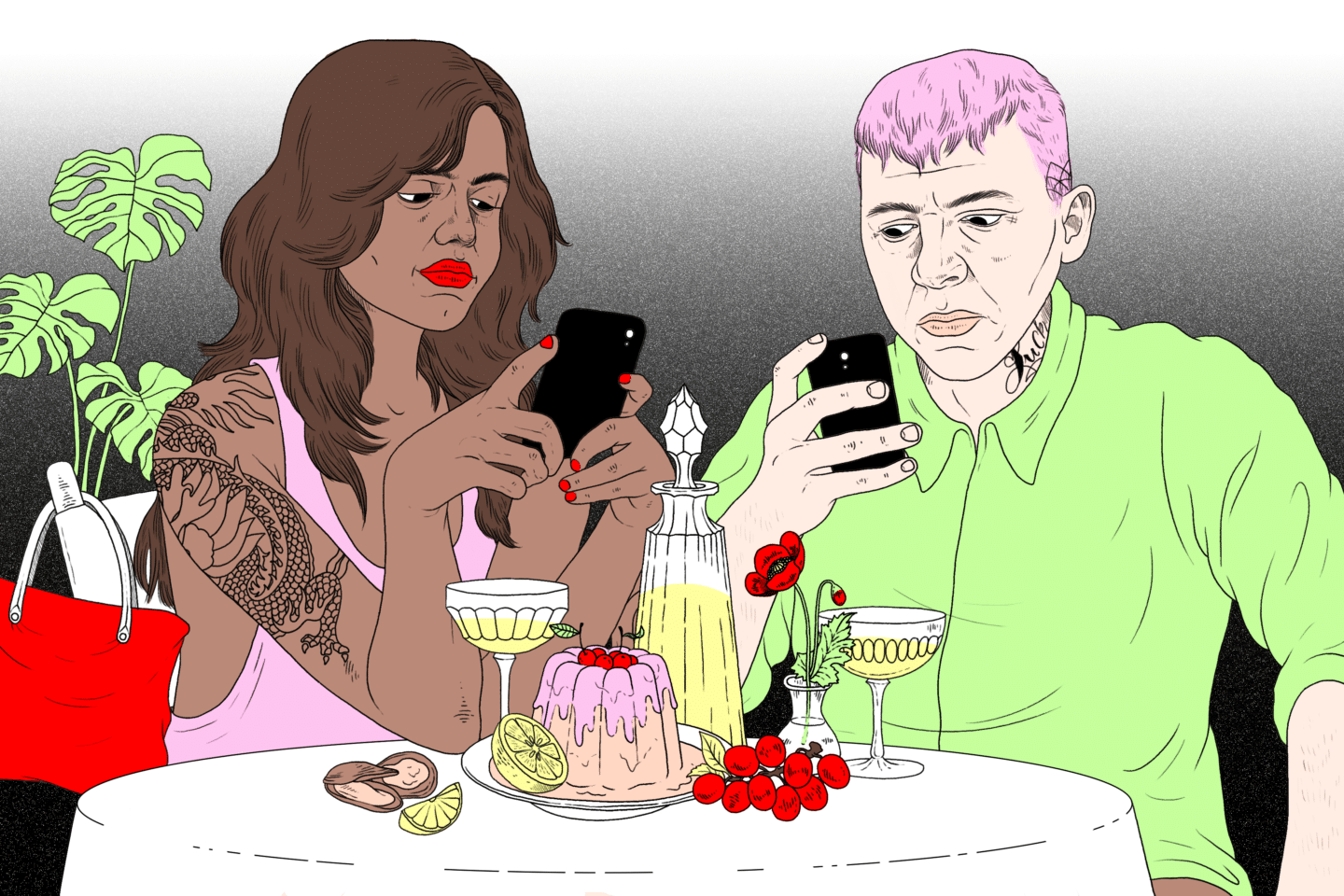 Sign up to our daily newsletters to get Stephen's columns straight into your inbox.