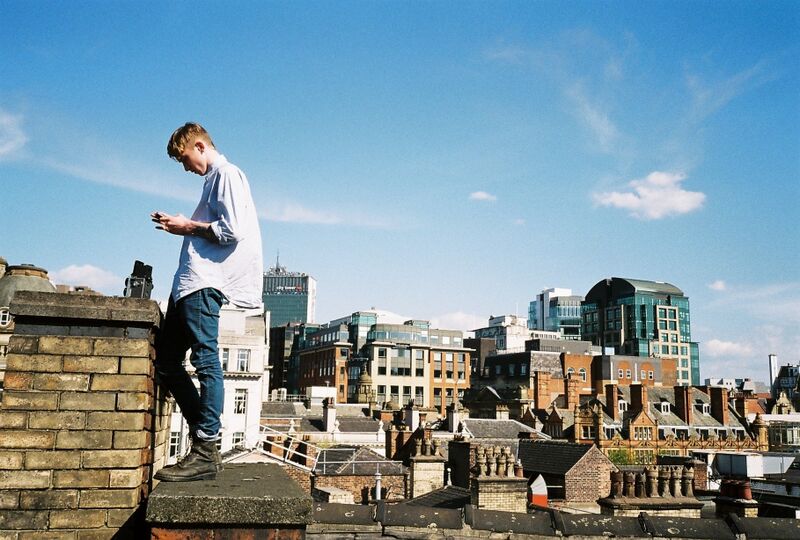 Melanie Anderton, whose son took his own life, writes about wrestling with this question in the depths of her grief. And why we need more than talking to tackle mental health problems.

Five years ago my life changed forever when I lost my only child Jake to suicide, he was just 23 years old.  Like any young person Jake had masses of potential, and was a talented photographer with everything to live for.  Jake did not fit the mould of a male who didn’t talk, Jake did talk and he reached out: in fact he could not have been more open, honest and have shouted any louder, he was desperate for help.

Jake trusted and confided in me and between us we went to appointments, wrote letters and banged on many, many doors. Sadly the help was disconnected and despite Jake fighting hard to live, he was found hanged on 23rd August 2015.  I still find this so hard to say and I still wake in a morning with that warm fuzzy feeling that all is well in the world, just for a fleeting moment, then reality hits and that day comes back to me all over again.  This is my new life.

The question ‘is suicide preventable or inevitable?’ – for me, this really does depend on whether or not missed opportunities of the past are today’s lessons learned.

So much hard work and effort over a number of years has gone a long way to raise awareness, change perceptions and diminish the stigma around mental health.  Charities, like Papyrus and Mind have informed and educated us and offered a lifeline to so many.  The celebrity collaborations of the Heads Together Campaign and the documentary ‘Suicide and Me’ by the rapper Professor Green, have been hugely successful in reaching wide and diverse audiences, quashing myths and inviting us all to join the conversation and open our minds. We would not be where we are today without all of this. This momentum must continue.

So what next, what happens when we do talk?  Jake talked. In fact, he talked a lot. The fact that we now have more people reaching out and seeking help sadly is not the ‘thing’ that switches inevitable to preventable, it is merely the impetus, the starting point to suicide prevention – a hugely important point to have reached but for me this is now where what we might call phase two of ‘it’s ok not to be ok’, really should come into play.

Jake was studying Contemporary Photography at degree level.   He was confident, articulate, warm, quirky, creative and good company, but all of this changed in November 2014.  His mood changed, he became impulsive, challenging and incredibly difficult to deal with.  It was bizarre. 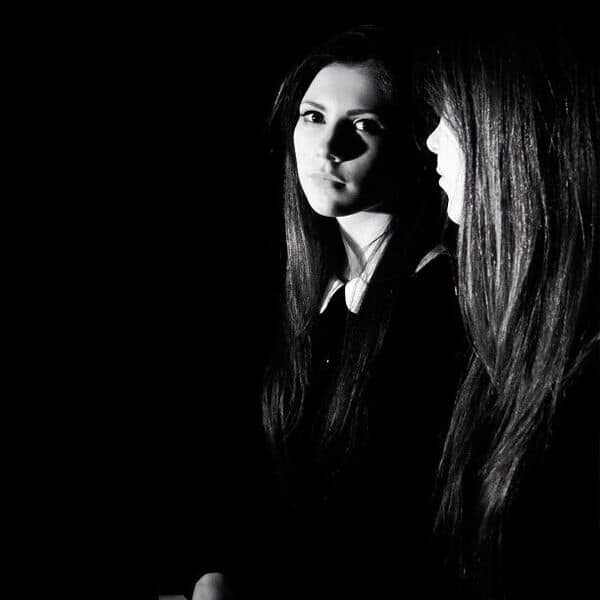 Jake was a talented photographer: this is a picture he took of one of his friends.

It is difficult for me to go back to those 10 months when Jake was so desperately unwell and in need of help, but the flow chart below will hopefully give you an overview of just how desperate the situation was.

Where is this going to end? 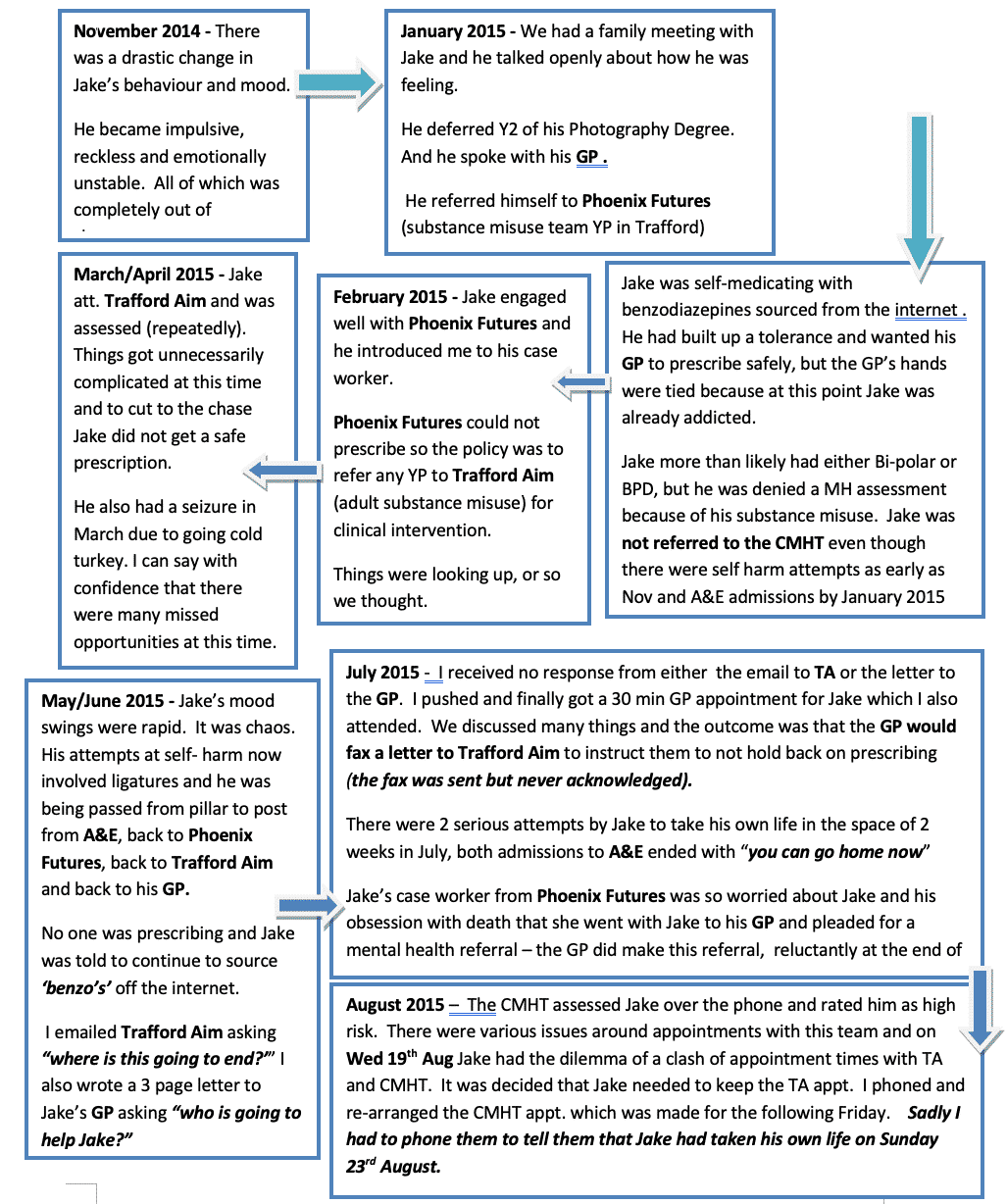 The Serious Incident Review and the Inquest into Jake’s death triggered a Regulation 28 which is a report issued by the Coroner with recommendations to prevent future deaths.

The Coroners findings and recommendations

1.         Phoenix Futures could not prescribe (which meant that Jake had to engage with Trafford Aim who at that time, were inexperienced at dealing with young people).

2.         The Coroner questioned the role of Trafford Aim (Jake was under 2 substance misuse teams, one of which couldn’t prescribe and the other didn’t prescribe).

3.         Disconnected referral pathways (not only was the Coroner referring to Trafford Aim here, but also issues around dual diagnosis and the fact that Jake’s case worker was not aware that she could have referred Jake directly to the CMHT).

4.         Acknowledgement and receipt of important correspondence (Jake’s GP faxed an important letter to Trafford Aim in June.  The investigation into Jake’s death and the inquest found no receipt or acknowledgement of this fax).

For about 2 years after Jake’s death, I found myself, totally consumed by the findings of the Inquest and spent a lot of time following up the recommendations with the relevant agencies. I know that GM MH Trust, Phoenix Futures, Trafford Aim and CMHT literally got their heads together before the inquest and implemented some changes almost immediately.  I know what the immediate changes were and I know what the plan was for moving forward in relation to the recommendations. I felt a sense of achievement and accomplishment that I had left no stone unturned and I was able to let go of some things and find time to take care of myself and to grieve.  I was exhausted.

My healing continues and I find different outlets to keep me occupied as I take on my new life without Jake.  My grief is complex and challenging at the best of times, but when I constantly hear that suicide is preventable, it just conjures up conflicting thoughts that are, intricately entwined with grief and guilt, and when people tell me that I could not have done anymore to help Jake, then I can only think ‘there must have been something because suicide is preventable’.  That is some weight to carry, it really is.

What would Jake’s experience be today?

This is a really important question for me as my journey through grief continues as does my concern for others.  Have lessons been learned?  If I don’t have change then I don’t have anything.

Back in 2015 Phoenix Futures were the commissioned Substance Misuse Team for Young People in Trafford.  They were a team who were innovative, flexible and they had the skills needed to work with young people.  Jake quickly built a good rapport with this team and he introduced me to his case worker.  I cannot fault Phoenix Futures.  The issues as the coroner pointed out were the disconnected services.

In 2018 retendering happened and Early Break, (not Phoenix Futures) are now the commissioned Service for Young People with substance misuse in Trafford.  Initially this worried me that everything that everyone knew and had been working on since Jake’s death would be disbanded and fragmented as restructuring happened and staff take on new roles in different organisations.

I could not have been more wrong.  This change in Trafford fills me with hope. Early Break like Phoenix Futures are a person centred organisation and they offer the same values and high standard of service to young people in Trafford.  Service users can expect psychosocial interventions such as talking therapy, motivational Interviewing techniques and support in understanding their moods and behaviours and the tools to make changes.

Jake’s case worker from Phoenix Futures now works for Early Break and I contacted her and the Service Manager to find out just what is different today.

Early Break work in partnership with Achieve Partnership and are commissioned partners with GMMH Trust.  They are able to access GP specialist support from clinical leads in GMMH, and where appropriate work with partners in community detox or rehab.  All members of staff have link worker roles, and are linked into teams in Trafford such as complex safeguarding team, criminal justice, LAC and care Leaver team.  All staff attend multi-agency meetings around the clients that they are working with.

If Jake walked into Early Break today with the same issues that he had in 2015 then things would be very different and I can say this with confidence.

His case worker would know that he/she could refer Jake themselves directly to CMHT.  This would offer early intervention for mental health support in the form of ‘dual diagnosis’ to Jake and valuable support to a case worker dealing with complex issues that go beyond substance misuse.

Early Break are partners with Adult Achieve who offer clinical support around prescribing.  This would mean that today Jake would be directly referred for clinical intervention with the potential to be prescribed safely both timely and when appropriate to do so. I am told that the Doctor who works with this team ‘gets the young people and their complexities’   This, is good to hear, it really is.

Jake would today be supported by a well practiced and established, multi-professional team who work together, attend link meetings, share knowledge and concerns and who all come under the banner of the Greater Manchester Mental Health Trust. I strongly believe that points 1-3 of the Coroners recommendations have been addressed.

In 2012 the government launched the Suicide Prevention Strategy that was to be implemented by all local authorities.  At the time that Jake was so unwell and before he died in 2015, this initiative was clearly a long way from being effective. The House of Commons Health Committee Suicide Prevention Interim Report 2016-17 criticised its failure to translate suicide prevention strategy into actual improvements. To find out what does happen at a local level I contacted Cllr. Joanne Harding who chairs the Suicide Prevention Strategy Meetings for Trafford Council.   We spoke on the phone and I was invited to attend a recent online suicide prevention strategy meeting as an observer/visitor.

To see for myself what happens at these meetings and the number of agencies and partnerships involved was quite overwhelming, but in a positive way.  It was clear to me that these meetings were regular, well planned and even as a visiting observer I could pick up the momentum of what had gone before.  At the heart of the agenda were of course discussions around recent local deaths by suicide and identifying any impacting factors in relation to COVID-19. A number of tasks and activities were discussed on the agenda and what really struck me was the enthusiasm, the productivity and the passion to share ideas and knowledge and to bring about change.   I am interested to see what happens nationally at these meetings and find out how information is shared.

When I was supporting Jake through those traumatic 10 months before he died, I felt completely alone and as a mum totally responsible for trying to save him, and I feel ashamed to say that I had not even heard of Papyrus or Young Minds (possibly because I did not use social media at this time), but also no one signposted me, no one offered me any help and this is something that was so difficult for me at that time. I don’t know how I got through each day.

Raising awareness of mental health and reducing the stigma must continue, but there needs to be a next big step and we must look at how we support not only those individuals who are experiencing a mental health crisis, but also those of us who are desperately trying to help a loved one in what can  feel like an impossible situation.

Taking suicide from inevitable to preventable is fluid and will always need courage, imagination, compassion, resilience and determination, but that’s ok.