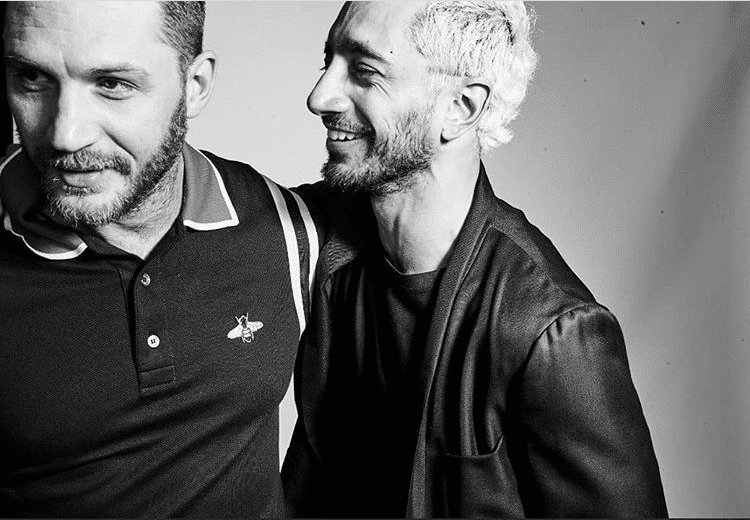 An interview with Riz Ahmed about starring opposite Tom Hardy in Venom, and why Hollywood must improve its representations of masculinity.

Riz Ahmed is the kind of man who makes you proud to be a man. An intelligent, articulate dude with great warmth and humour, he may just be ideal role model we’re all looking for in this toxic wasteland. We managed to sit down with Riz on the promo campaign for Sony’s Venom where he talked to us about masculinity, diversity on screen, and Thundercats. Getting information about Venom was tricky – as is now customary for any major comic blockbuster, the finished film and most details about it were being kept under wraps to a military-level degree. But from the ten minutes of footage we saw this looks to be a different, weirder kind of superhero movie. As such, we’re interested. And we’re interested in everything Riz has to say regardless.

BOM: We’ve not seen the film yet, so we need some information

Riz: Well, what do you want to know?

The name of your character, what he does, and how he feeds into the story…

Great. My character is called Carlton Drake and he is based on a character in a comic book, and in that comic book storyline Carlton Drake is alive at the time of the Cold War – when a lot of these comic books started out – and he says, “Look nuclear war is going to destroy civilisation but if you’re rich enough you can give me a couple of million dollars and I’ve got this completely protected underground bunker for you.” Fast forward to the present day and the big threat facing humanity is global warming and environmental collapse – so he’s trying to find a future for humanity that is on another planet, once we’ve destroyed this one. That’s quite true to life and contemporary. We have everyone from Jeff Bezos to Richard Branson to Elon Musk sending rockets into space to explore that new frontier. So it both draws on the comic books and our contemporary reality. And Carlton Drake is a character who basically thinks he’s doing the right thing, it’s just that to make an omelette you have to break some eggs.

So he’s not a straight ahead bad guy?

He’s not out there to be bad, he’s out there to try to save the world, even if you might have to die in the process. Or even if it means he’s the overlord of humanity in the new tomorrow. But still, the intentions are good.

The tone looks pretty fearsome with horror elements. Is it the right time, after all these superheroes films, to have something a bit harder and more complex?

Does your character experience that too?

I can’t tell you about that.

When you’re prepping for a big film like this, is it very different to a drama?

It’s different because the script always changes a lot on these big films because they’re always trying to tweak and perfect it and get it right. Even if you’ve shot some stuff you’ll have to go back in and shoot it again a few days later. So you’ve got to be able to roll with the punches, be ready to improvise, keep it loose. Interestingly there’s less you can do to prepare for these type of films than there is for those really small ones, because everything has to be decided up front for those.

How was it working with Tom Hardy?

It was nice, I’ve known him for a long time now, we met back in 2007 – he did a cameo in one of my music videos and we kept in touch. He’s someone who is very passionate about his work, he gives 110%, he’s very physical, and he cares about the people around him. He’s always been good to me. And I enjoyed it, I really enjoyed it. It was a new experience doing more action stuff.

Did you have time for hanging out after work?

Do you feel like you’ve broken into Hollywood now?

Well I’ve broken in but I haven’t stolen anything yet. I’m locked in a mansion and I’m yet to locate any of the valuables or the exit route. Without any gloves to safeguard my prints. That’s it for that metaphor.

At least you’re in there.

I am in there but I’m not sure if anyone’s home. The owner might be lurking around with a baseball bat.

Do you feel weight of responsibility to represent diversity on screen – do you have that sense of duty?

I’m aware of it, of the fact that many people feel unseen and unheard. And that sometimes seeing someone like me can make them feel like their experience is valued. That’s a privilege. And to be honest the responsibility side of it, of don’t put a foot wrong, and don’t represent us in the wrong way – I wouldn’t want to do be doing that kind of work anyway.  So I’m aware of this stuff but it doesn’t dictate my choices or paralyse me, because I’m one of those people too. I just follow my own instinct. That thing of the focus group of one. You can never please everyone. I think a lot of the work I did early on was controversial and I built up quite a thick skin because of it.

With a New Masculinity movement happening, do you see a shift in the way Hollywood is representing men?

I wonder. I wonder. Maybe not enough. There’s still a way to go in putting multiple narratives of what it means to be a man. I think a lot of us still feel the burden of expectation, of meeting a mantle of manhood that’s totally outdated. And leads to mental health issues and the astronomical suicide rate that we see amongst adult men. It’s something I think we all struggle with isn’t it? What does it mean to be a man? It used to mean this but now it means this…or does it mean both and how can we do it all? And I really welcome narratives that allow us to question what it means to be a man and be seen as a valid man. And this adjective ‘manly’, what does it mean, really? Can we try and unpack that? Because you realise it’s quite a narrow mould that we’re all asked to fit into. So I think that that’s something we can do a lot of work on, for the sake of men and women. 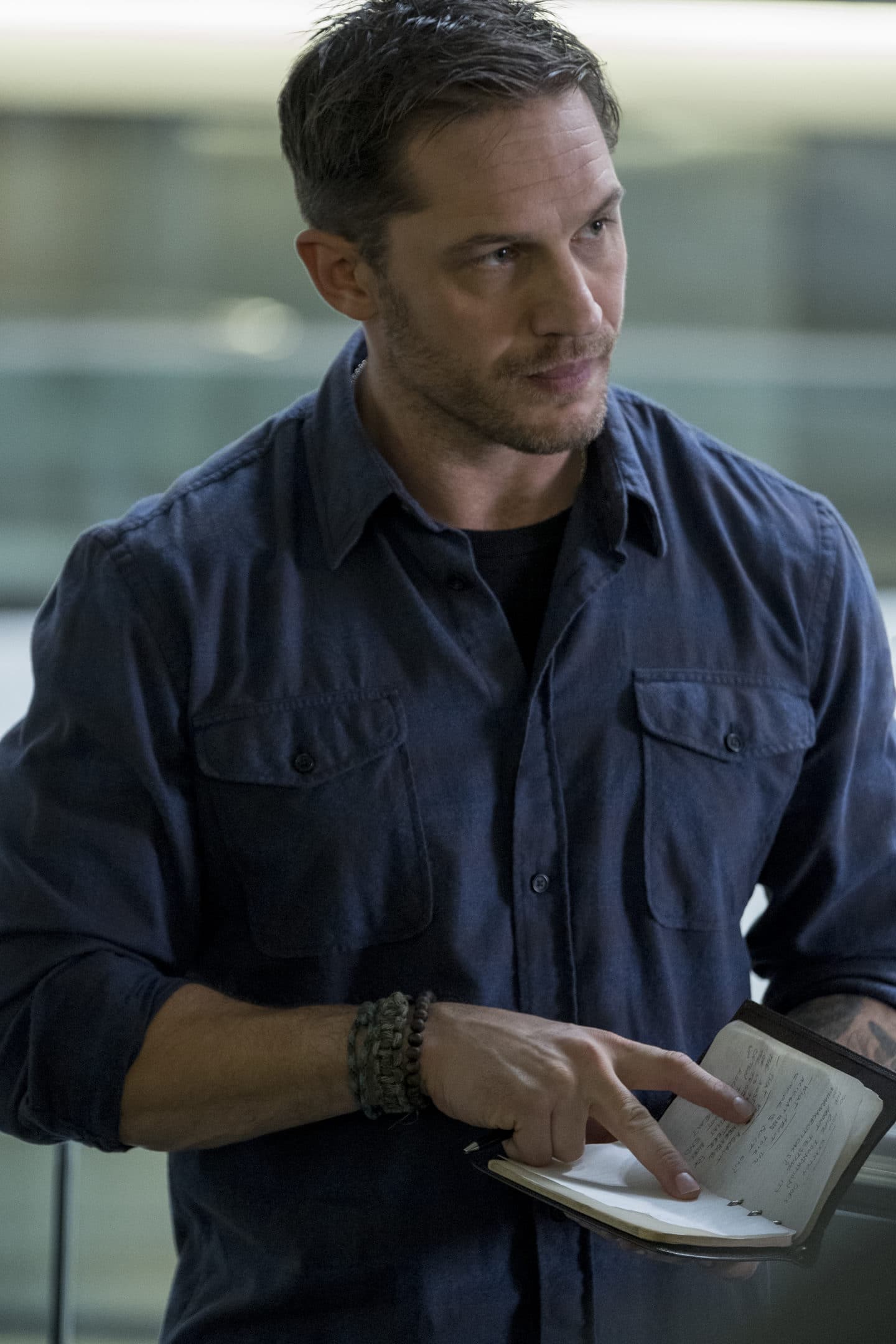 I’m not sure how Venom quite fits into that?

Well Eddie Brock is someone who is a bit down and out in some ways, he’s just broke up with his girlfriend, he’s just lost his job, he’s in that dark place where you sometimes find yourself where you think about ending it all. And against his will he’s overtaken by this alien creature and through each other, Eddie and Venom learn to see things differently. So I guess it’s about trying to find a new perspective in dark times. And a way of doing that is to try to have a more expansive sense of self. Not think that you’re in it alone, but that you’re actually connected to other people. And of course in Venom there’s a very literal manifestation of that, where it’s about two entities sharing a body. So really it’s this idea of: you’re not alone.

Were you into comics as a kid?

I wasn’t really a big comic book fan, but I watched a lot of cartoons. Thundercats, X-Men, Mysterious Cities of Gold and Ulysses. But I got into quite hardcore films quite early. I watched Nightmare on Elm Street when I was seven. And Robocop at 8 or 9, so the interesting thing about this film is that it does cater to different ages. Me and you could go and see it, and a 12 or 14 year old could really enjoy it as well.

Are you studied up on Venom comics and storylines for the real comic books fans?

No, I’m not going to pretend I’m a big comic book buff. I’m not. I’ve tried to bring what I can to this character, and I hope they like the film. That’s all you can do. Between being offered the role and starting shooting I had a month, so am I going to spend that month reading every comic book or am I going to try to nail my lines or the character? I’m going to do the latter.

What’s next for you?

Next I’m going to release some music – I’ve got my first solo single out for 3 or 4 years. It’s called Mogambo, and it’s out around the same time as the film. Mogambo was a supervillain in a famous Bollywood film from 1987 called ‘Mr India’. Mogambo controls the serum that can render you invisible. And I just thought it could be fun to play with this idea of visibility, when so many people want us to vanish right now in this Us and Them political climate. It’s about this idea of we’re here to stay.

Quick final thing, how do you feel about Brexit?

Just a quick final thing! Can you unpack the most intractable political situation of the century? It’s easy really…I don’t know how to solve it man, I think it’s just a mess. A lot of people were lied to and voted differently to how they would have voted now. I think that the current Prime Minister doesn’t believe in what she’s being forced to put through. And I just think it’s going to tank our economy and reduce our place in the world. I hope it works out, somehow.

Venom is out in cinemas on October 3rd.

Sign up to our daily newsletters to be on the frontline of progression.