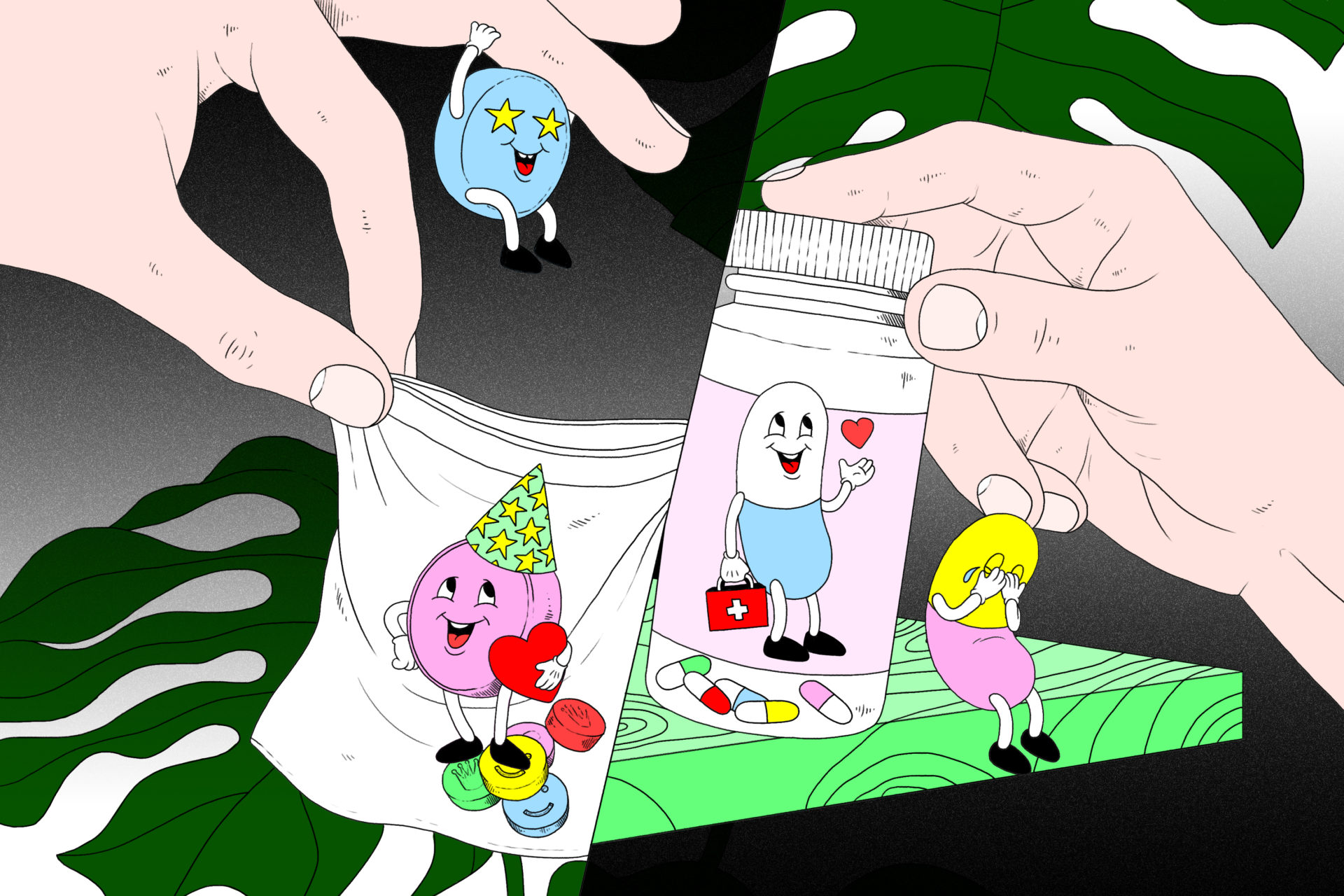 Stephen Manderson writes about his life on medication, of every sort, and how he's finally made the move into anti-depressents. Incredible and important piece from The Book of Man's columnist.

It being Mental Health Awareness Week and me being ambassador of CALM I thought I’d speak about something not many of us do: contradictions, hypocrisy and anti-depressants.

I’ve done a lot of work raising mental health awareness and trying to help remove the stigma that surrounds it, but something I’ve always been quite neglectful of is my own mental health – especially when it comes to drugs. You might think this makes me a useless ambassador, but bear with me.

I don’t know if you’ve ever seen the meme about the girl who’s ‘afraid of hormones in milk’ but ‘takes acid off strangers’, but it’s similarly as perplexing as for-ethical-reasons vegans who spend their weekends shovelling shovel, telling you about all the damage industrialised farming does to the planet while blissfully unaware of the bodies attached to the lesser part of what he/she is shovelling.

Not to mention the damage being done environmentally by producing the devil’s dandruff for the masses – as a very small island the UK still manages to take third place on the world’s leader board of cocaine consumption (there’s some very hungry noses out there).

My pal was on his way back from a show. After reluctantly waking up and letting him in, he asked if he could, “rack one up.”

I went to make a coffee and offered him one, to which he replied, “Nah – that stuff’s bad for you.”

Similarly, I’ve come across more than one person who won’t take paracetamol because it’s “bad for you,” let alone anything prescribed by a Dr – “Don’t you know what antibiotics do to your gut biome?! They don’t just kill the bad bacteria you know!”

But to be fair I have probably taken more pills than pills too.

Probably due to the laughable-in-hindsight theory that I knew where I was at more with controlled substances and was safer with what was in them, than something a doctor might give me. Right.

I remember waking up or going to sleep with that ‘tummy ache’. The sort of tummy ache that you rock back and forth and cry with as a child. Especially around times that I found particularly stressful, but I was 5 and too young to be finding patterns in things.

By particularly stressful I mean having to go to school. Which became even more stressful after a few days off, and the thought of having to explain why I’d taken time off, which I must have known deep down I didn’t really think I had a reason to – otherwise it wouldn’t have been so stressful. No one feels guilty about genuinely being ill, do they? And you can’t be genuinely ill if they can’t find something genuinely wrong, can you?

The crippling feeling I had in my stomach would get worse with each day I’d take off, and all the while I’d be being taken back and forth to the doctors just in case they came across something. It was these visits to the doctor which really fuelled my wondering mind – if the doctor saw a reason to keep looking then surely there must be one? This feeling must mean I’m ill?! This feeling would eventually lead me to believe I was, and so began a life of, I wouldn’t say hypochondria, but health awareness.

My friends and family would all say hypochondria.

After years of self-medicating with marijuana, a brief stint experimenting with chemicals around 21, reverting back to only drinking alcohol at 24, then doing some more experimenting at around 29 when it had all become so common place it was inescapable – my journey with Pills had been quite extensive.

Especially once I discovered the rose-tinted world of benzo’s.

I was 27 when I found Valium/Xanax/Benzopadines. The wonderful chemical cuddles that finally got rid of that ‘tummy ache’ I’d had since I was a child.

After a car crash in 2013 and an operation in 2017 I had to take a lot of pain killing pills too, ranging from codeine, to tramadol to oxycodone and normally a mixture of the three. Both times I had to stop the pain killers before the pain had subsided because the nodding and dribbling – albeit accompanied by a lovely feeling of ‘everything’s okay’ and ‘nothing really matters’ – wasn’t all that attractive, and all of the being stationary wasn’t good for an active mind such as mine. It began to push me into a depression.

I don’t know if you’ve ever had any kind of drug withdrawal, but the nutty dreams I’ve had after quitting weed don’t quite compare with having to taper off of 100mg of prednisolone (steroids) or by far the worst thing I’ve ever encountered: benzo withdrawal.

I’ve never known anxiety or detachment like it. After a prolonged period of my anxiety being ‘looked after’ with it and ‘treated’ by it, when I’d ripped the plaster off and wriggled out of the chemical cuddle, I experienced what can only be described as hell. Proper hell. Actual hell.

Twitches, tics and jolts, detachment. If you’ve ever pulled a whitey on green it’s like that bit where you question if you’ll ever feel normal again, where for those few hours you feel like a visitor in your own body… for weeks. Waves of your pulse racing, your heart beating like it’s trying to escape your chest and your brain working at a million miles an hour, while you’re unable to tolerate your thoughts and feelings, wanting to get out of your skin.

All of this from something you can get from your doctor, or your less responsible mate who’s been to Thailand.

You can understand why it took me a while to properly consider SSRI’s – or ‘anti depressants’ as I feel less comfortable calling them.

Less comfortable because no one wants to be ‘the guy on anti depressants’ do they? It doesn’t have a nice ring to it.

I was considering it.

Having not taken a pill since Glastonbury 2015, serotonin still feeling regularly lower than average, was I, in 2018, about to sign myself up for a course of more pills?

Could another drug in place of all the others really be the answer?

Want to hear more? Check out Professor Green’s brand new podcast ‘Learning to Adult Slowly’ below. Or listen to episode one here. 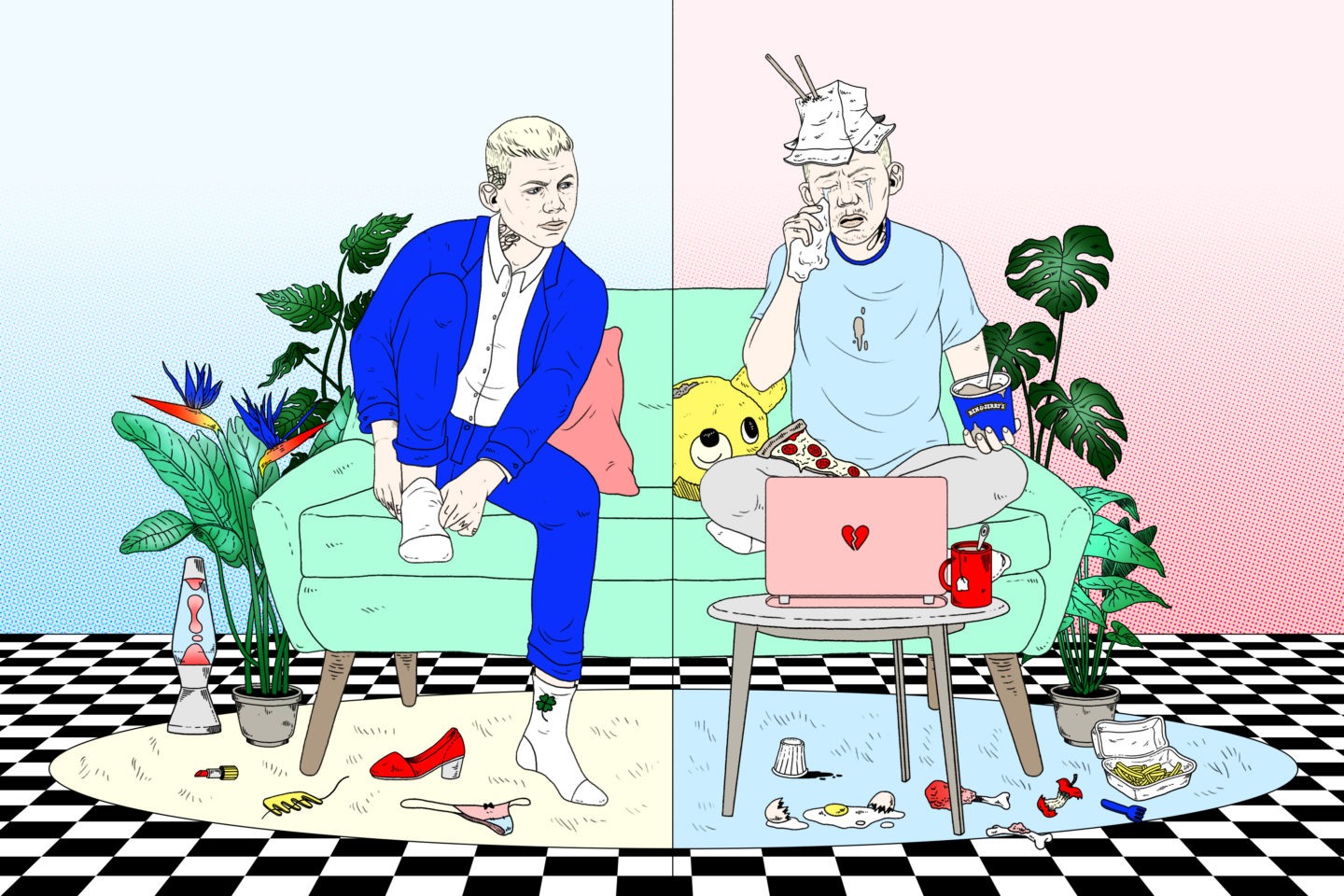 Sign up to our twice daily newsletters to get the Professor's column straight to your inbox.