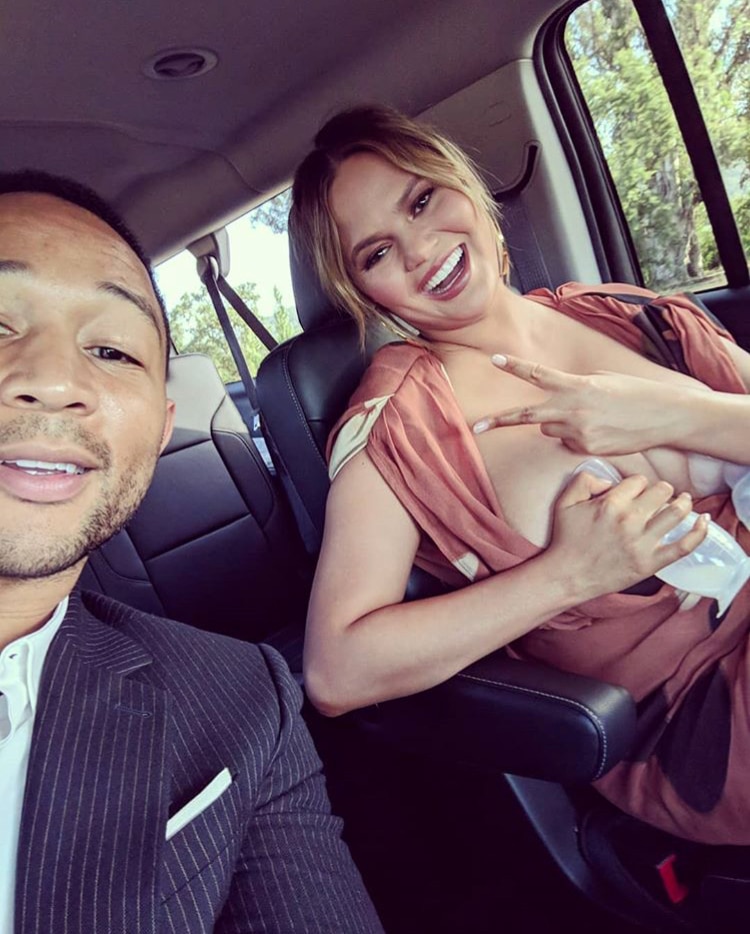 What men can do to support breastfeeding mothers

Because it’s not just up to the women, it’s our responsibility to help too – as dads, employers, and nice guys.

During World Breastfeeding Week it occurred to us that there wasn’t much discussion about men and breastfeeding – what we can do to help. Seems to us some of the issues around breastfeeding, particularly in public, stems from the fact that men just leave it to the women to sort out – their boobs, their baby, their problem. Not quite fair, especially if it’s your baby too. But even if you’re not the Dad, as simply nice empathetic human beings, there must be more men can do to support breastfeeding women at work, in public, and on a campaigning level – don’t worry, you won’t look like a pervert. We spoke to Emma Pickett, chair of the Association of Breastfeeding Mothers, to find out more.

What can men do to support their breastfeeding partners more?

Those of us involved in supporting new families know how valuable partners are in the breastfeeding journey. Having the breasts is not the entire story. It’s very much a joint effort. It starts with dads understanding how breastfeeding works. The breastfeeding class and all those books are for you too. When we visit a mum, it’s reassuring if her partner stays and listens and takes notes. He gets that he is part of this journey. We worry about the dads who seem to think that the breastfeeding bit doesn’t involve them. Do your research. Spend more time on learning about breastfeeding than you do decorating and learning about prams. How does milk supply happen? What is normal for the first few days? What does it look like when a baby is breastfeeding effectively? Who can help when things are challenging? Why is ‘skin to skin’ important after birth?

It’s about knowing why breastfeeding matters but also knowing HOW it works. Dads are best for finding the helpers. Even in pregnancy, find out about the local breastfeeding support groups, the local lactation consultants and the helpline numbers.

One of the most important things is to understand what is normal newborn behaviour. Modern research has told us much more about the importance of responsive parenting. Newborn humans are primates. They want to be held and stay close. They also want to breastfeed a lot – not just for milk but for comfort and reassurance. A supportive dad understands that and reassures their partner it’s not forever.

You may also be the gatekeeper when it comes to the rest of the family. Limit visits from guests who might cause stress – especially in the early days. If your partner is upset by Auntie Gladys saying, “How can that baby be feeding for so long?” – you are the one who politely sorts her out. You may even need to talk to the grandparents before baby arrives and make sure they understand what’s normal. New grandparents may want to see baby as soon as possible but your partner will need to recover from birth and get breastfeeding established. I regularly talk to mums who talk about how upsetting it was to have the wrong guest too early on. You may need to direct them.

Feed the new mum. Direct visitors. Know what’s happening and know who to ask when you aren’t sure.

I’ll handle this business 😉💪🏾 Mama @laurenhashianofficial has her hands full nursing/feeding Baby Tia, so I’m feedin’ mama her dinner. My pleasure. So much respect to her and all mamas out there holding it down and running things. Just landed and good to get all my girl’s settled in. Now, I gotta go satisfy my own appetite.. Iron Paradise, here I come. #EveryoneGetsFed #DaddysGottaGoToWork #ChivalryIsToughOnTheKnees

What are the key things that men should remember about the difficulties of breastfeeding?

Breastfeeding might take a bit of getting used to, but it shouldn’t be painful. If your partner is in pain, particularly if the nipples are coming out misshapen and squashed, get some help. Many problems can be fixed by small adjustments in the way baby is attaching to the breast. There may also be videos online that can help.

A lot of the early stresses are about parents simply not understanding what’s normal. Some new parents imagine that babies will feed only every three hours, or they might sleep for several hours at night. When parents understand that babies may cluster feed for several hours at a time; or they might not sleep unless they’re being held; or they might wake for a feed quite regularly at night until they get an understanding of day or night – it can be reassuring. The panic of “What if my baby is not normal?” can be the most stressful bit. And being able to say, “This is normal,” is where you can provide reassurance and calm.

Few difficulties can be solved by giving a bottle – talk to someone if you want to go that way. It can confuse the baby’s feeding technique and impact on the development of mum’s milk supply.

Some dads think that giving a bottle is an important way that they can support in the early days. But it’s also worth remembering that giving a bottle isn’t necessarily a relaxing experience for a new baby. The flow is likely to be fast. They may be more likely to get windy and uncomfortable. The best way to support is having a lovely skin-to-skin cuddle with baby and developing a beautiful way of comforting them that doesn’t necessarily involve food, while mum rests.

When your partner is in pain and emotional (which might mean extra tears in the early days), it can be tempted to want to ‘fix’ things and find quick solutions. Sometimes the best way forward is about taking a moment to find people who can help, going back to them again and helping your partner to work through problems. They will never forget your support at such an important time. When someone wants to run a marathon, we don’t support them by driving behind them in a car in case they get tired, we empower them to reach their goals.

What can men do, whether dads or not, to support breastfeeding mothers in public spaces?

Men are often the business-owners and the employers. In a society-wide sense, we need new mums to feel welcomed. In a cafe, have a simple sign. Train staff to offer drinks and a warm smile. At any work, support your colleagues who need to pump milk in a working day. Don’t wait for a new mum to find out what your workplace can do. You can be the one to ask where the pumping room is and how your place of employment can develop a supportive policy. What a massive relief that would be to a new mum to know someone has gone before her, so she doesn’t have to.

On a personal level, encourage your partner. Thank them for feeding your baby. A mother who feels she has to stay at home is an isolated one. It may not be comfortable to always smile warmly at every mother you see breastfeeding but you can encourage your partner to do so. Think about where your antenatal group can meet up once babies arrive that is a breastfeeding friendly space. Compliment the businesses that are supportive.

I know it's Father's Day and all but my wife is pretty awesome. She's taking me to dinner but still on mommy duty

Why is there still this stigma attached to mothers who breastfeed in public? Where does this disapproval come from?

It’s worth remembering that many mums breastfeed in public with no problems at all, never receiving any negative comments or even a raised eyebrow. But we know new mums worry about it and a minority do experience problems.

We live in a society where breasts are primarily sexual. Breasts are perceived as being about attraction and when our breastfeeding rates are so low, breastfeeding isn’t always seen as ‘normal’. Some imagine a new mother is being provocative and sometimes the fear of potentially seeing a breast is more the worry than the reality. Breastfeeding rarely shows anything, but people fear otherwise.

Many people in the UK didn’t get to breastfeed for as long as they wanted to. Or they may have lived at a time when breastfeeding wasn’t promoted and bottlefeeding was seen as the way forward. When they see a mum breastfeeding in public that can sometimes bring up feelings which cause them to subconsciously behave strangely. It certainly isn’t just men who have problems with breastfeeding in public. When we hear of the rare cases of people making comments, it can often be a woman.

It’s also about new motherhood generally too. The public often rolls its eyes at a new baby being restless in public or a new baby in a public space. We often forget that babies are little people who are allowed to be part of family life, feel emotions and eat when they’re out and about.

And for the record, what are the benefits of breastfeeding for mum, baby and dads too?

How long have you got? The benefits for baby are immense and lifelong. We are learning more every day about the constituents of breastmilk and the amazing things they can do. In the short term, the baby that is breastfed is less likely to experience colic and gastroenteritis and be re-hospitalised in the first year of life. They are less likely to have infections and allergies. The Lullaby Trust also explains how breastfeeding reduces your baby’s risk of cot death. Even if a baby only receives some breast milk, they will receive antibodies tailor-made by that by their mother to help protect against infections in the environment. Breastmilk contains stem cells. It contains something called alpha lactalalbumin which is a protein that kills cancer cells. This is perhaps one of the reasons that breastfeeding is connected to reduced risk of childhood cancer.

For the mother, it protects against breast and uterine cancer and osteoporosis. There is also evidence that suggests it protects against diabetes for both mother and baby. It also has a protective effect against developing postnatal depression. You can read more about the research around breastfeeding on the UNICEF Baby Friendly website.

For the dad, it means a baby that’s less likely to get unwell, a partner that receives protection, less faff when travelling, loved ones who can stay in bed at night, less cost, less impact on the environment.

Breastfeeding is much more than a medicine and some food. It’s also nature’s way of creating a secure trusting comforted baby with bonds to its parents, protected against the world when its immune system is just getting started. It’s true that not every mother can breastfeed exclusively. And when someone can’t breastfeed, there are ways to bottlefeed in a way that are as responsive as possible. But for the vast majority, breastfeeding works out with access to the right support, both in terms of breastfeeding expertise and particularly in terms of support at home.

Visit the Association of Breastfeeding Mother.