An extract from a remarkable new book about what a man goes through when a couple loses a baby. With an intro by the author Richard Ellis.

Baby loss happens every day but men hardly ever talk about it. And if they don’t talk about it they certainly don’t write about it. I learnt this when my former partner and I lost three babies over three years and I was looking for something to show me that I wasn’t the only wannabe Dad in the world facing these problems. The majority of the attention when a couple lose a baby goes, rightly, to the woman. But there’s a man’s side to the story too, one that’s often kept inside, swallowed and never told.

In the midst of it all, I often felt that I would have liked to have read how another man had coped with it, what he thought and how he felt. So instead of hoping someone else would solve the problem, I wrote about my own experiences to try to help other men in the same situation. When I started to write I found I wasn’t just writing about the sharp end of losing the babies. With each new disappointment the voice of my paternal instinct got louder and more insistent. I realised I was also writing about how I had always wanted to be a father and beginning to face up to the creeping fear that it might never happen.

Losing a pregnancy and frustrated fatherhood are topics that often remain so private that men barely even discuss them amongst themselves. In my book, The Phantom Father, I provide my account in the hope of giving a voice, and some comfort, to this silent army of wannabe Dads.

Excerpt of The Phantom Father, by Richard Ellis:

I’m dressed and standing in the flat. My phone rings, it’s Natalie again. I answer. It’s not her voice. It’s the voice of a well-spoken, well-educated young man. He sounds respectful, sympathetic, pained almost. He introduces himself as a doctor. Whatever he says next is unnecessary because I have already understood the message. The implications of hearing his voice on her phone are that I know what’s happened before he has to tell me. We have lost the baby. The third baby in three years.

I ask the voice if Natalie is ok. Partly out of reflex, but partly to make some contact with her. So she can hear him responding to my question, so she knows I’m asking about her. I want to make some connection with her before I get to the hospital. I know she’s too upset to come on the phone and that hearing my voice will make her worse, tip her into an even sadder place. As if the act of us engaging with our shared grief will explode it into something exponentially more awful than the prosaic details of the last couple of hours that I’m now grasping to take in. I tell the doctor I’ll be there immediately; he tells me please not to rush. I think I must be sounding manic.

I ring a taxi, no answer. I’ve used this firm a hundred times and this is the only time they
haven’t answered after two rings. I ring their alternative number. Still no answer. I Google another one nearby. Finally, someone picks up.

‘Can I have a taxi to King’s College Hospital as soon as possible please?’ ‘Fifteen minutes.’

Eventually, he hoves into view, in taxi cruise mode, the driver ducking and craning his head simultaneously, squinting to make out the house numbers. He seems to sense the urgency and thunders down the steep hill from where we live and towards London. The roads are quiet, the lights are green, the descent is sharp, he gathers speed. We approach Peckham Rye Common. We’re travelling so fast that the cars coming the other way look slow and quaint like a toddler’s fairground ride. At one point I see the speedometer nudge 70 as we surge through the residential streets of South London.

4am in early summer: not dark and not light, not quite day yet but not still night. Bunches of straggling clubbers swig cans on the way home from Peckham’s hipster night scene. They blur past the window, looking like photo snapshots of carefree, overgrown children. Then we’re up and over Dog Kennel Hill. The taxi driver overtakes someone just after a sharp bend and we wait for the lights to change. As soon as the hospital is in sight I ask him to drop me out of the car. I’m desperate to get out and moving. I pay him and start running down the street to the main entrance. He drives off languidly, looking bemused as he comfortably overtakes me pelting down the street to the entrance. He’s in no hurry to get to the next emergency, his excitement quota for the night met. I think to myself that maybe he thinks I’m running to catch the birth of my baby; my son or daughter.

There’s not a soul at the hospital entrance and the large automatic sliding doors which are barely ever given time to close by the constant hospital traffic, are locked. I scan around for some instruction, and glance at the same notice three times before being able to properly take it in. I press the security intercom, explain who I am, and they buzz me through. The usually thronged reception area is deserted and sterile, absent of people. We’ve been through those doors scores of times in the past two years but never have I seen it without the rolling cast of hospital faces: chirpy porters; preoccupied doctors; imperious consultants; smoking patients; worried visitors; scanning taxi drivers; gaggles of nurses, convivial and correct.

The lift lumbers and clanks up to the 3rd floor. I remember they tell me Natalie has been moved to a different ward. I head straight to the midwife station. There are loads of them behind the desk, talking and bustling amongst themselves. ‘I’m looking for Natalie..?’ On hearing this two of
them immediately snap to attention, the mention of her name electrifying them into action. This comforts and worries me equally. One of them addresses me with a demeanour of equal parts efficiency and empathy and leads me to a private room.

The door opens and I see Nats sitting on the hospital bed, her feet not quite touching the floor. She manages to smile when she sees me. The saddest smile I have ever seen in my life. The smile that communicates a thousand things, shares the breadth and depth of everything we’ve experienced. Everything leading up to now and losing this, our third baby in as many years. Expresses the hope and disappointment and everything that we know and have learnt and shared and lived through and that no one else will ever understand. It’s all there. And we both know it. And we don’t need to say anything.

That night had been the high watermark of the turbulence of the past few years. In about a 24- month time span we had experienced three failed pregnancies, surprising the seasoned medical staff of one of London’s biggest hospitals with their odds-defying bad luck. We’d been trying to start a family for a number of years before this but without any sign of anything happening until it all came at us so fast we barely had time to think.

You learn plenty at times like this but sometimes you don’t appreciate how much until you find a way to climb outside of events. You can spend years wondering when your story is going to turn up and when it does you barely recognise it, but it’s already built up such a head of steam your only choice is whether to get on and ride it or get run over by it.

I felt I had to do something to try to make sense of it all, so I wrote a book about it. I wanted to explain how it feels to be a man trying for a baby, how it feels for a wannabe Dad to lose a baby and how he gets on terms with the creeping fear that fatherhood is never going to happen. 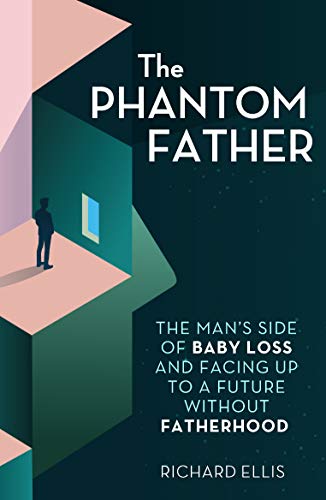 The Phantom Father by Richard Ellis

The story of what a man goes through when a couple loses a baby.