We can change the world

A new study by positive men’s organisation Promundo and Dove Men+Care proposes a world-changing reframing of parental responsibility and calls for full gender equality at work and at home.

50 minutes a day. That’s the amount of additional time men would need to contribute every day to caring for children and households to make a leap toward achieving gender equality in unpaid care. This is the stat and the goal revealed in the third-ever State of the World’s Fathers report, which has been by put together by Promundo with Unilever Dove Men+Care.

The Book of Man was lucky to be invited to the UK launch of this report at the House of Commons this week, to hear an inspiring and challenging series of talks on the issue of fatherhood today, from the likes of David Lammy MP, Marvyn Harrison from Dope Black Dads, and Kathy Jones from the Fatherhood Institute.

This was all led by Gary Barker, the founder and CEO of Promundo and Nikki van de Gaag, Senior Fellow at Promundo. Promundo is an organisation that works around the world to promote gender equality and preventing violence, and the report is part of their global MenCare campaign which works in over 50 countries to engage men in positive parenting, equitable caregiving, violence prevention, and maternal, new born and child health.

Their new report has a big ambition: it calls for full equality between men and women in the workplace and at home. Globally, women spend significantly more time than men on unpaid care and domestic work, both in developing and developed countries. It is one of the key barriers to equality, mothers are paid way less at work, take on the majority of the responsibilities at home, and have to deal with expectations around what constitutes ‘women’s work’. At the same time, the report is clear that there is an eagerness for fathers to do more at home, and that equality in this sense would be greatly beneficial for women, men and children. However there are significant difficulties in making this happen, including financial worries, cultural prejudice and legal and policy barriers. 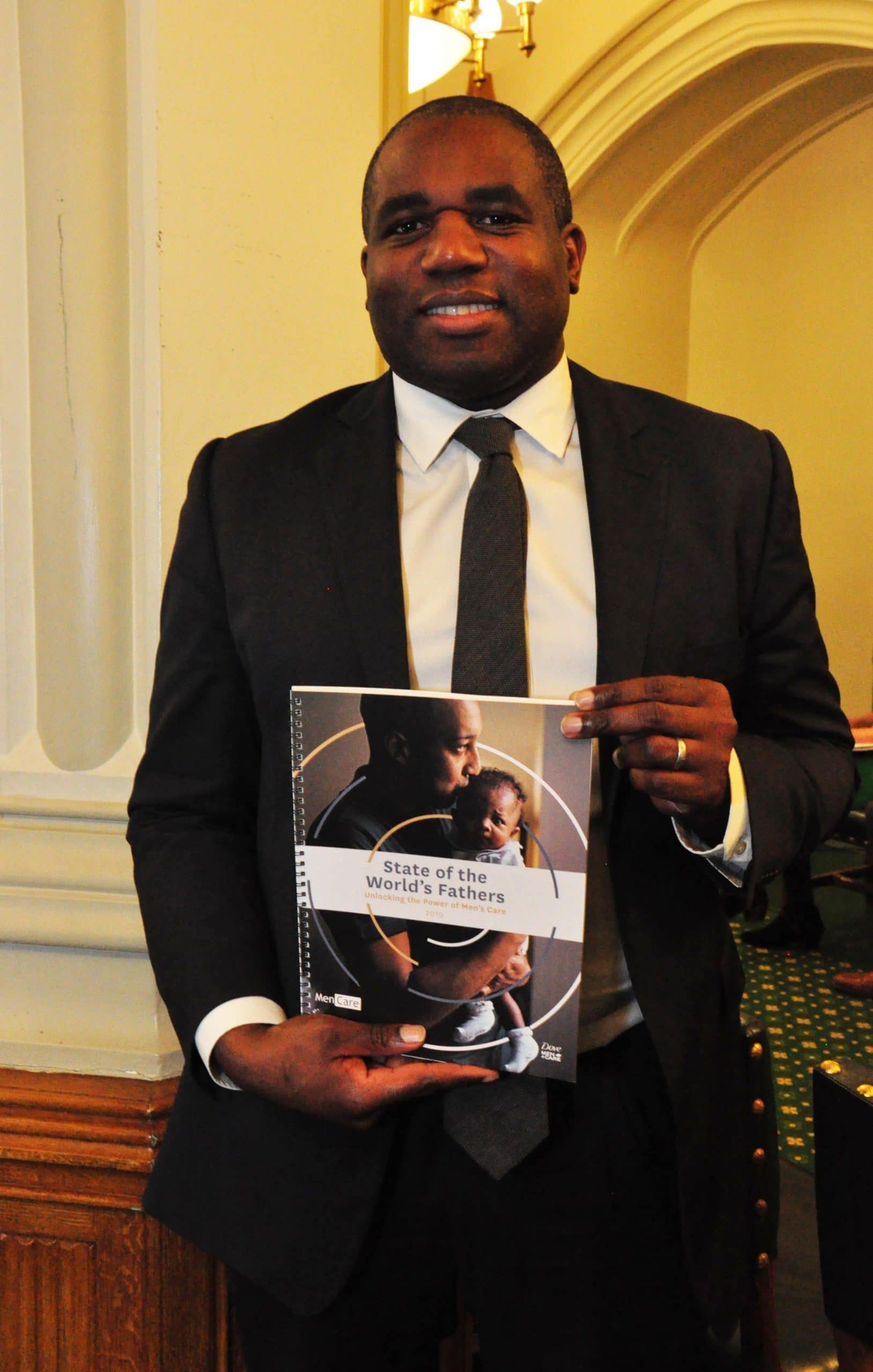 This report identifies these issues and also provides impetus for how they can be dealt with. Make no mistake, this is potentially life-changing stuff for men and women everywhere, and is a conversation happening at the highest levels as well as on the ground. In a time when there’s a resurgence of old school male buffoonary – TrumpFarageJohnsonbloke – it’s crucial there are men on the more liberal side making the case for a different viewpoint, where our kids can grow up without being trapped in gender boxes.

Here are the key points from the State of the World’s Fathers report:

New research across seven countries (Argentina, Brazil, Canada, Japan, Netherlands, UK, and US) finds that 85 percent* of fathers say that they would be willing to do anything to be very involved in the early weeks and months of caring for their newly born or adopted child. In the UK, 93 percent of fathers say this. So, what’s holding them back? The report identifies three major barriers:

(1) the lack of adequate, paid paternity leave, and low take-up of leave when it is available;

(2) restrictive gender norms that position care as women’s responsibility, alongside the perception of women as more competent caregivers than men;

(3) a lack of economic security and government support for all parents and caregivers.

No country in the world has achieved equality in unpaid care work – or pay equality – between men and women. The progress is incredibly slow. Across 23 middle- and high-income countries, the unpaid care gap has closed by just seven minutes over the past several decades. Globally, women spend significantly more time than men – sometimes up to ten times as much – on unpaid care, volunteer, and domestic work. They also spend more time on unpaid and paid work combined). Analysis of time use data finds that if men took on at least 50 minutes more care per day (and women did 50 minutes less), we would tip the scale toward equality.

One proven policy solution to support the redistribution of unpaid care work – equal, paid, non-transferable leave for all parents, including fathers – has yet to see universal uptake: Less than half (48 per cent) of the world’s countries offer paid paternity leave, but when available, it is often less than three weeks – or sometimes only a few days. In the UK only 44 per cent of fathers say they have taken their full two weeks.

Fifty-eight per cent of fathers and 76 per cent of mothers in the UK say the main reason they couldn’t take more leave with their newly born or adopted child is because of financial barriers – some of the highest numbers any of the seven countries surveyed.

There is also still a perceived competence gap on parenting. Men rely more heavily on their female partners than vice versa: across Canada, Japan, Netherlands and UK, approximately twice as many fathers say they “rely on [their] spouse for knowledge and information on parenting” compared
to mothers. Fathers from Argentina to Brazil, Canada, the United Kingdom, and the United States believe that they are less competent at caregiving than their female partners.

Governments and employers have a role in creating laws and policies that support parents, caregivers, and families, in all their diversity, to thrive, from affordable childcare to living wages, social support to affordable education, and equal, fully paid, non-transferable parental leave. They also have a responsibility to set this crucial standard on care work, and to ensure that it is valued and shared equally. The report finds that certain countries like Sweden, Norway, Denmark, and El Salvador have set positive examples when it comes to supporting men’s caregiving and gender equality across norms and policies.

Reaching equality in unpaid care and domestic work is an urgent matter of gender justice and women’s rights. It is also a key factor in achieving the UN Sustainable Development Goal 5: Achieve gender equality and empower all women and girls. Having involved, caring fathers is good for gender equality and for women’s health. It can be linked with better relationships and a reduction in rates of men’s violence against women. It is good for children’s health and well-being, too. When fathers take on an equal share of the care work, it will accelerate progress for this generation and for the next, helping their children to support gender equality and break stereotypes

“We must accelerate national commitments to support all children, parents, and families to thrive, and to achieve men’s uptake of half of the daily care of children and of our homes. Full stop,” says Gary Barker, President & CEO, Promundo. “Anything less continues to perpetuate the inequalities that women and girls face every day.”

“The overwhelming expectation is still that caring is ‘women’s work’, while men’s sense of their primary role being a breadwinner means that they often take little responsibility for providing care or doing household chores,” says Nikki van der Gaag, lead author of the report, “If we are serious about achieving gender equality, this has to change.”

The global report calls for countries, employers, and civil society to commit to accelerate action
and support men’s increased participation in unpaid care work. By taking such action, the MenCare Commitment aims to facilitate an enabling environment where men take on 50 percent of the unpaid care work by 2030. It also supports fathers to put their intentions to care into action by – at a minimum – taking on an additional 50 minutes a day. The MenCare Commitment is coordinated by Promundo, on behalf of MenCare: A Global Fatherhood Campaign. Policy-makers and politicians, health workers and teachers, employers and media influencers, advocates and activists must all step up to end the inequality in unpaid care work. Only then can we build a more equal world.

Sign up to our daily newsletters for the latest from the frontline of modern men, plus special offers and exclusive access to our events.

The working dads revolution has already ...

After a warm glow? Try this whisky exper...