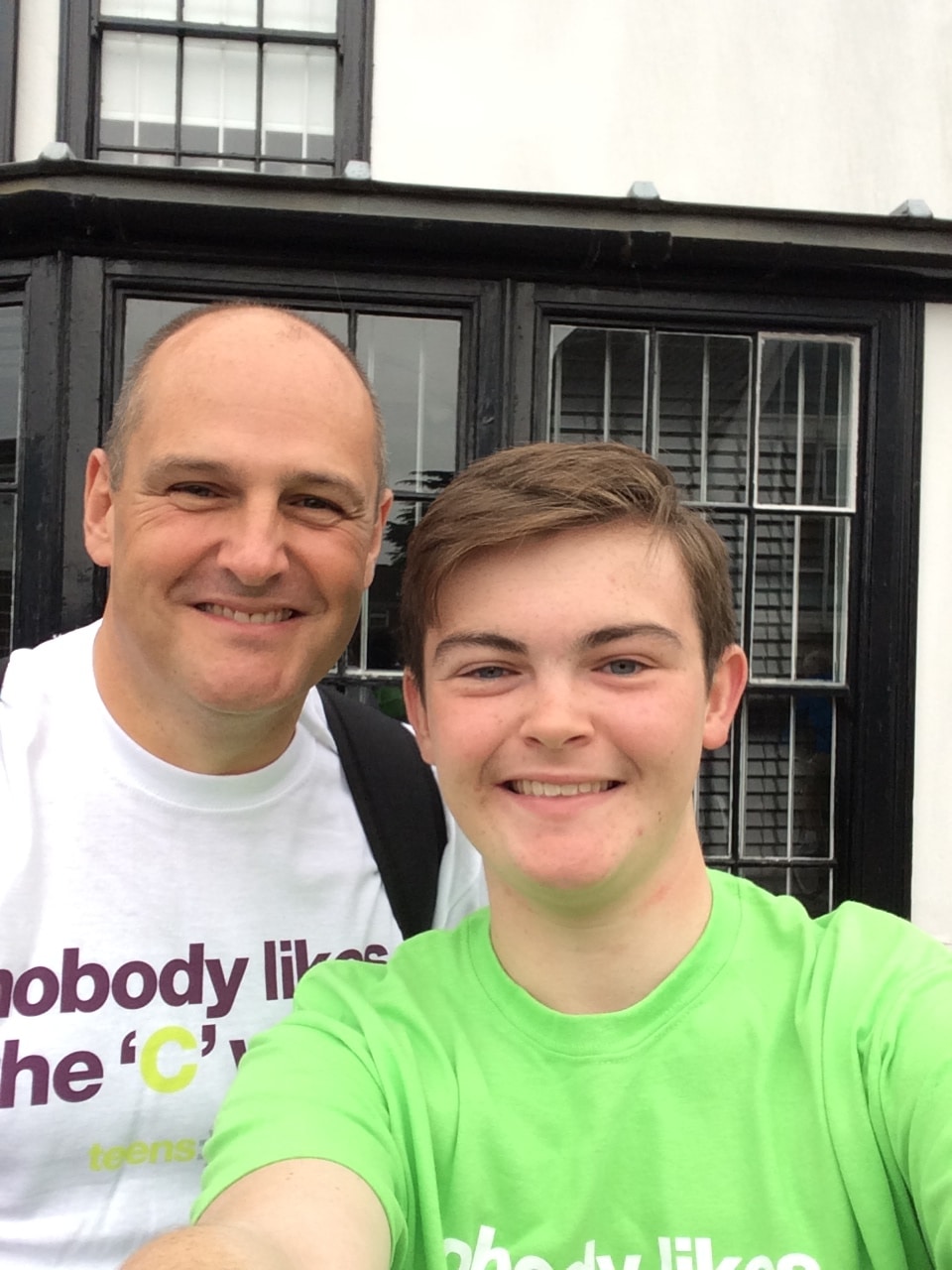 The Fight Against Cancer

“My son was diagnosed with cancer.”

How one father coped when his 14 year-old developed cancer – and how a new treatment trial brought about a near-miraculous turnaround.

One of the worst parental fears is your child becoming seriously ill – and to have the news that they have cancer is unimaginable. But David was one of many fathers who had to cope with such a scenario, when his 14 year old son Elliot was diagnosed with Hodgkin lymphoma. Here, father and son tell us their story, and how a ground-breaking trial funded by Cancer Research UK, managed to change everything…

David: “Elliot was suffering from night sweats and had some skin complaints, but then a lump presented itself on his leg. My wife took him to the doctor’s and almost immediately alarm bells were ringing. A couple of days later we were at the Stanmore Orthopaedic Hospital. We didn’t really realise they specialised in cancer.

After a few more appointments we became aware these investigations were getting deeper and deeper. We realised it, but didn’t talk about it amongst ourselves, and Elliot didn’t have a clue. And then one day we went along to get some results and we were told exactly what it was. It was the most shocking thing I’d ever heard in my life.

Elliot took it absolutely brilliantly. The words he said, I’ll never forget them. For a 14 year old boy to be facing a number of medical professionals, in that manner… I put my arm across him and he cried a few tears, and then I don’t know where it came from, he said, “I’ve got cancer, I’ve got to deal with it, and I will beat it.”

Wow, for a 14 year old boy to come out with that. It gave us a lot of strength a lot of encouragement, but we didn’t know what was to be ahead.”

There was no point in over-thinking. I just thought I’ve got to get through it all.

David: “We were referred to a UCLH hospital at Euston. They were having trouble diagnosing exactly what it was, and there were times when it looked extremely serious and that was very distressing.

At the same time our daughter was imminently off to university. She was in tears, and she told us she wasn’t going. But Elliot approached her and said, ‘I want you to go. You’ve worked hard to get where you’ve got.’ He encouraged her and said, ‘You go, we’re a few miles away but nothing is going to stop us seeing each other.’ And indeed it didn’t. It was such a brave thing that he did.

In a family when a major thing happens like this, you get people who you think might be weak ending up as strong, and vice versa. And Elliot was leading the way and his strength, determination and the way he dealt with it, carried the whole family through.

If you were talking about a 20 or 30 year old person doing that you can accept it but he was 14. He was a baby.

His cancer was eventually diagnosed as nodular lymphocyte Hodgkin’s lymphoma. We’d never heard of that, we had to look it up. And the  Cancer Research UK website was very helpful.

Normally the treatment for someone like Elliot would be 2 to 3 years. It looked like a real long hard haul that was going to be ahead. People were flashing names and acronyms and things like that, and all you can see is his little face. He’d been through a lot, with the needles and the scans, and had dealt with it fantastically. The thought that it’d take as much as three years out of the kid’s life. It was devastating.

They couldn’t operate because of the location of the tumours. If they had operated there was a huge chance that he wouldn’t walk again.”

David: “It’s one of the worst situations you can ever wish to be in. My daughter was seriously ill when she was a year old, but you can pick them up at that age and cuddle them and you feel like you’re soothing them and helping. You have that sense of being in control of that situation which as a dad is important I think.  However, with Elliot, he was a great big lumping 14 year old. Boys of 14 don’t really want to be hugged and kissed by their dads.

It is very, very difficult – sometimes I’d start crying in the car…

As a parent you want to suck up all their ills, you want to take all the illness from them. You can’t understand why they’ve got it and you haven’t. They’ve done no wrong, they’ve not hurt anybody, yet they’re the ones who are suffering. 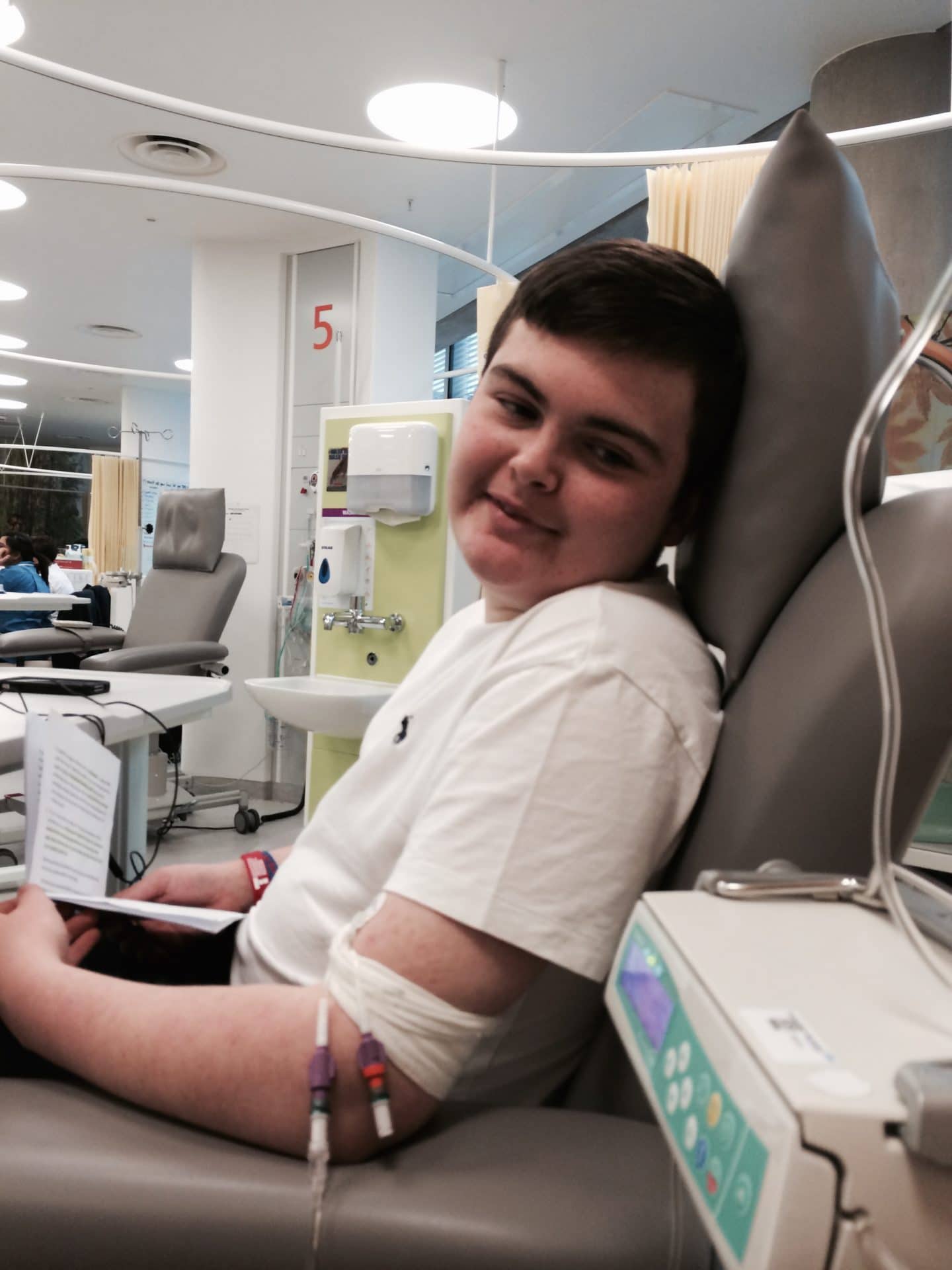 David: “When we were told what he had, we were told there was a Cancer Research UK-funded trial called Euronet PHL-LP1 [which aims to reduce chemotherapy for children] going ahead, which they wanted to try to reduce the tumours. It had been tested, we weren’t guinea pigs, it was in the final stages of being signed off, but there was still a lot of trepidation as we went into it.”

Elliot: “With the trial I was quite pleased because it wasn’t for so long. I was told by the doctor it would only be for a short time, so I was quite happy about that. The idea of having to go to the hospital loads of times for three years was intense. But over a short period of time it was better for me in terms of not having to worry about it.”

David: “We were pencilled in for 3 cycles. The first cycle went really well. Then the second cycle went ahead. Elliot was as strong as he could be – the usual lethargy, sickness, hair loss, but those were things he could overcome.

We got to the end of the second cycle, had the results through, and our oncologist, Dr. Shankar called us in and said, “Elliot’s responded absolutely amazingly.”

The trial was being overseen by a team in London, and a team in Germany. And at that point the German team wanted to go ahead with a third cycle but Dr. Shankar said, “I’m prepared to stick my neck out and say no. We’re going to stick with what we’ve got because the tumours are reducing at such a rapid pace.”

Obviously for the next year we were on tenterhooks. We were up there every few weeks for more scans, more tests, but all the time all the actual results were coming back 100% positive. In literally just over a year Elliot had been given the all clear, he was completely in remission.

Letting out the emotions

David: “We were fortunate that Elliot was so strong throughout it. But the psychologist said it’ll probably come out later….

There was a young girl called Sadie who was diagnosed at a similar time to Elliot with cervical cancer. She was a number of years older, but they saw each other at oncology appointments and treatments, and then they joined a charity together called Teens Unite where they support children who have cancer.

As Elliot was getting better, Sadie got more excited and she looked great, she looked really well. There was a massive fundraising night for Teens Unite, a black tie event, and Sadie was due to be there but she was in hospital she’d taken quite badly. They played a video which had her in it, it was fantastic fundraising video. But then only a few days after, we heard that Sadie had sadly passed away.

It really impacted us and both me and my wife Michelle were worried it could impact on Elliot. Outwardly he didn’t show it.

A few weeks ago, there was another fundraising event where the kids were involved. They played that same video, with Sadie on there – and Elliot actually broke down…

It was the first time that Elliot had admitted that it made him feel really sad.

And that’s good because emotions are no good if they’re stuck inside. Sometimes they do need to come out. And they needed to come out for Elliot.

Eliot has had to learn to come to terms with his emotions. He is human, it affects him like anyone else.” 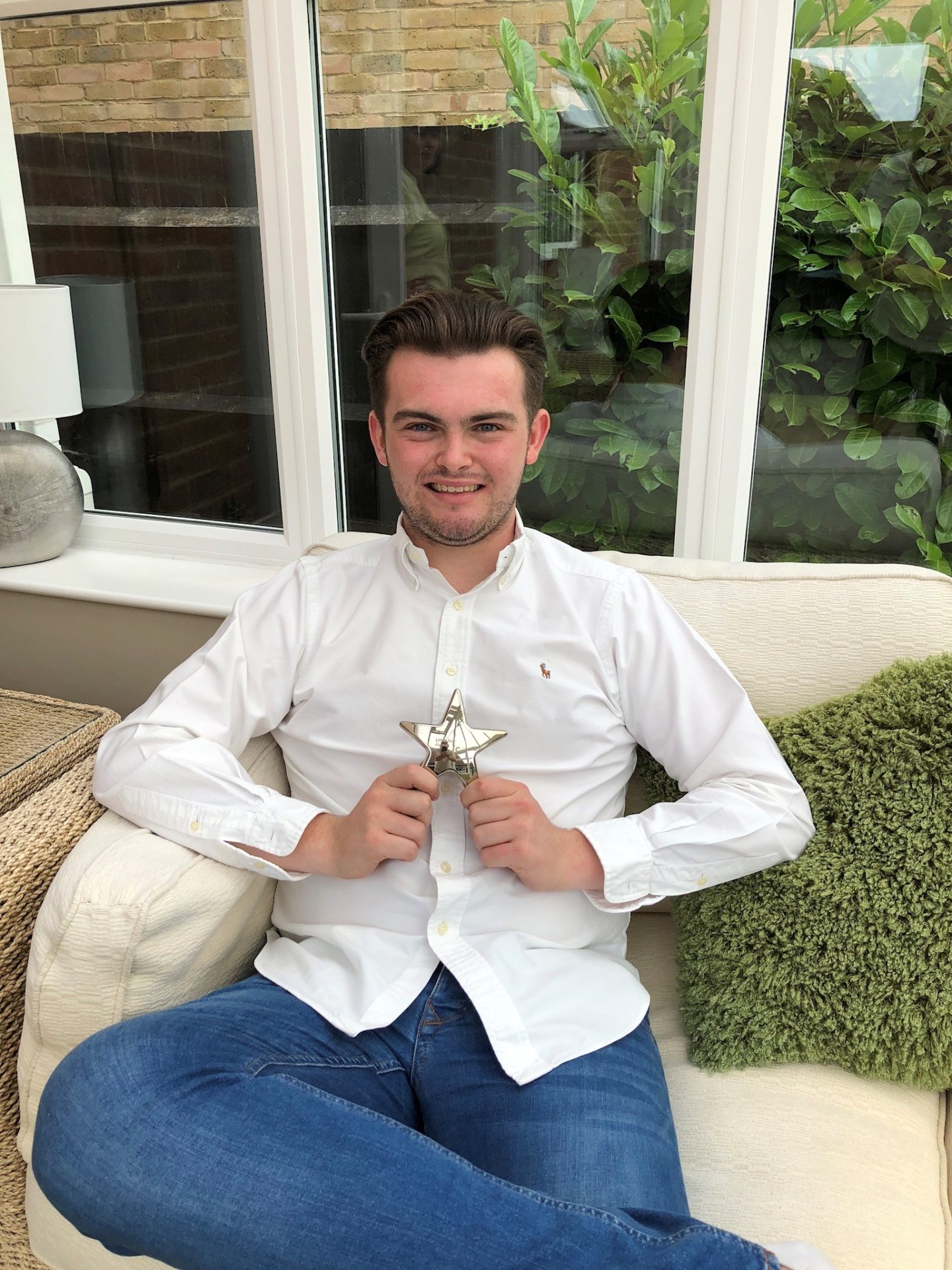 David: Thanks to Cancer Research UK he’s here today. We recently attended their Kids & Teens Star Awards party, and I went up to someone from TK Maxx who are a major fundraiser, and said, “I’d just like to thank you because you’ve given us two years of our life that were about to be stolen from us.

We know children who were diagnosed a year and a half before Elliot, but were on the old treatment, and some are still on it now.

Eliot thanks to this treatment has moved forward at such a rapid pace. And currently he’s a healthy, moany, obstinate, teenager. I laugh but do you know what, I’d have that any day.”

It’s difficult when you’re going through treatment because you don’t get to see scientists, or the people who work hard to raise the funds, but it’s nice now to actually be able to meet them talk to them get to know them. It’s always quite nice to meet people like that, who have people they want to care for too.”

David: “We expected the worst and it was a tough situation, but it was made so much better and the people that fund these cancer research projects often don’t actually see the effect. They’ll put a pound in a box and walk away. They don’t see how it actually affects families how it does families good.

When we were halfway through the trial, we heard a fantastic story on the news. It said for the first time ever, more people are surviving cancer than are actually dying from it. And that gave us so much hope.

The money raised to be put into research for trials like Elliot was on, results in families like ours. We’re as healthy as we can expect to be, and we’re more than happy than we ever hoped we could be. Things are good. Things are good.”

Read about how one father had his own battle with blood cancer.